An outstanding outdoor painting festival, notable for its unique take on one of the largest movements in art history.
Nanci Nott 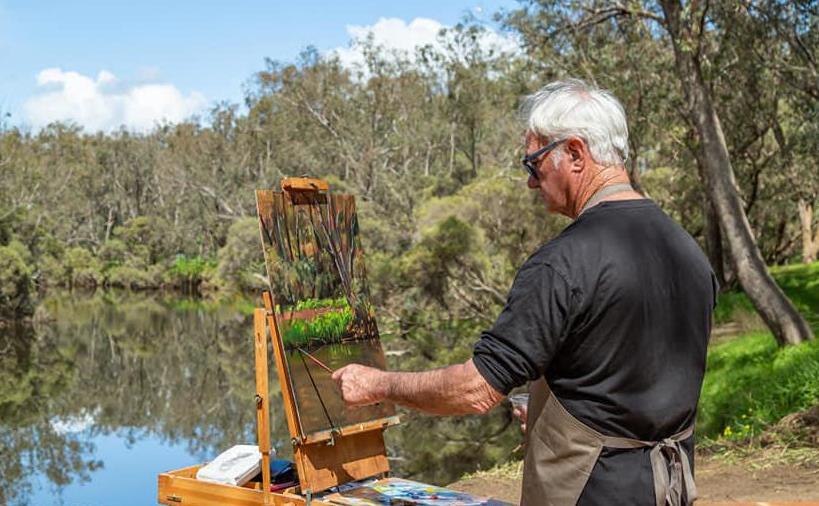 Over the September long weekend, 152 artists convened in Western Australia’s Peel Region to attend Plein Air Down Under, the brainchild of internationally acclaimed artist, Leon Holmes, and in collaboration with plein air painter, Barbara Thoms.

In the week preceding the festival, attendees participated in a series of workshops facilitated by this year’s feature artists, Leon Holmes, Brendon Darby, and Cass Gartner.

On day one, a flurry of artists descended upon Mandurah Foreshore, where a wide festival footprint ensured attendees had plenty of space in which to find their creative zones. The sun shone over a picturesque tableau of easels until lunchtime, when storm clouds appeared to have their portraits painted.

For the duration of the two hour Quick Draw competition, artists huddled in nooks and crannies around Mandjar Square, braving the elements to capture wind-cut waves with rain-spattered palettes. Sunshine returned for the exhibition, during which the Honourable David Templeman, Minister for Culture and the Arts, officially opened the festival, and presented the afternoon’s Quick Draw awards.

Day two saw easels popping up around the historic town of Pinjarra, as artists gathered beneath bridges and by creeks to paint bushland, buildings, and passers by. At the end of the day, an exhibition in Town Square kept the sales team busy, as artists displayed their work from the previous two days.

Day three kicked off at Doddies Beach with an early morning painting demonstration, courtesy of Leon Holmes. Vincent the (aptly named) coffee van offered welcome sustenance during the final paint out, after which, the festival relocated to Mandurah Foreshore for one last exhibition, transforming the area into an open air gallery for the remainder of the day.

Throughout Plein Air Down Under, judges and feature artists observed the real-time creation of hundreds of paintings, and invited a small selection of artists to exhibit their work.

Plein Air Down Under is an outstanding annual festival, notable for its unique take on one of the largest movements in art history. With travel off the cards for the foreseeable future, this event places Western Australian artists and collectors in a fortuitous position. When the world returns to normal, Plein Air Down Under is certain to become a stand-out fixture of the international plein air circuit.