One of Broadway’s funniest and most outrageous musicals is given star treatment at the Brisbane Powerhouse.
Suzannah Conway 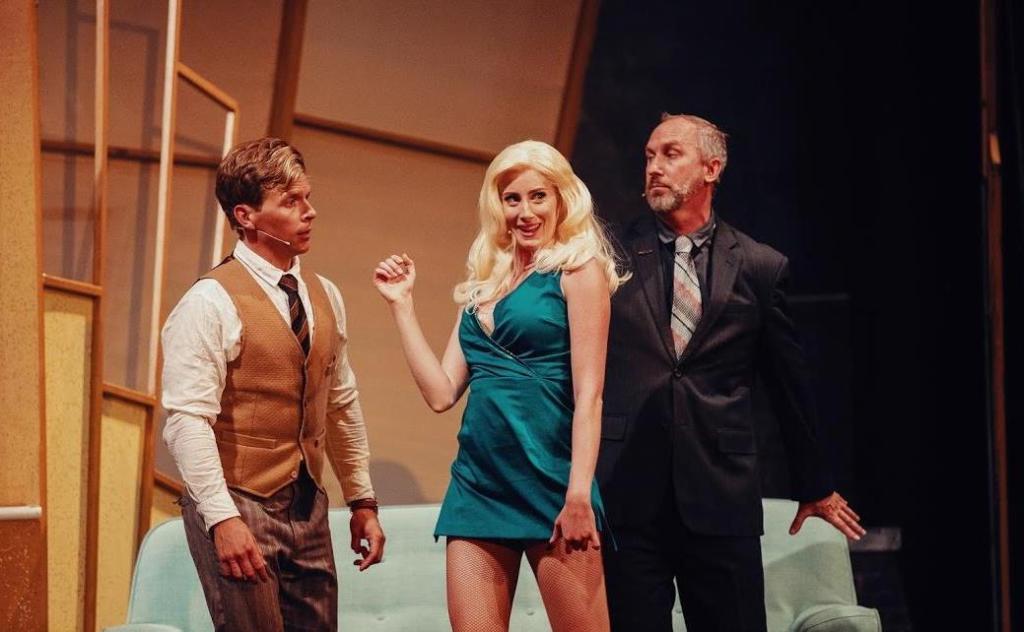 The musical version of The Producers, adapted by Mel Brooks from Brooks’ irreverent 1967 film, is regarded as one of Broadway’s major successes, garnering 12 Tony Awards. Once the king of Broadway but now an old hack, sleazy producer Max Bialystock, and his gauche accountant sidekick, Leo Bloom, come up with a fraudulent way of tax avoidance by staging a flop rather than a hit. They discover the worst possible show, Springtime for Hitler, a gay musical romp about Hitler written by a Nazi-loving German, with an equally appalling director, appearing to be a perfect vehicle for failure.

‘Brooks’ acidic, tongue-in-cheek work … is a witty and clever musical farce so absurd that it is designed to encourage laughter rather than cause offence.’

Brooks’ acidic, tongue-in-cheek work, with its caricatures of the female sex, gay people and Nazis, as well as depicting characters with shockingly inappropriate behaviours, is a witty and clever musical farce so absurd that it is designed to encourage laughter rather than cause offence. It is also in many ways as highly relevant a piece of theatre today as it was 20 years ago.

Crucial to the farce working well is the relationship between the two principal characters, Max and Leo, both in their timing as well as an ability to keep the action moving and the laughs coming. They were both excellent in their respective roles.

As Max, Matt Young gave us a down-at-heel, opportunistic and manipulative character, determined to survive against all odds. His was a well-rounded and dramatically strong performance, having a powerful voice in delivering some of the best songs of the night, including the ‘The King of Broadway’ and ‘We Can Do It’. He ran out of steam a little in the cleverly written prison song ‘Betrayed’, but was gloriously funny with perfect timing when dealing with his bunch of little old ladies in ‘Along Came Bialy’, that included a delicious performance by Chloe Taylor as the naughty Hold Me Touch Me. Mark Hill was a marvellous Leo, his naivety and lack of worldliness beautifully portrayed at the opening, with his addiction to his childhood blanket and awkwardness with women. His timing and singing were first-rate, the character coming into his own in the glorious ‘I Wanna Be a Producer’ and ‘That Face’.

As the love interest, Rachael Ward’s Ulla, with her stereotyped Swedish persona, was all legs and gyrations in her delightfully delivered solo ‘When You Got It, Flaunt It‘. She also impressed as both a singer and dancer in the Hitler musical itself.

Patrick Conolly’s Franz Liebkind was a wildly eccentric Nazi, convincingly portrayed, singing his various ridiculous Bavarian songs with flair and commitment. As the director, Roger De Bris, James Lee gave a wildly over-the-top camp performance, wearing the most exotic array of frocks and colourful suits, his rendition of ‘Keep it Gay’ throaty and dark. As the all-dancing, singing Hitler he was hysterical, mincing across the stage to the delight of the audience. His assistant and partner, Carmen Ghia, was given a menacing and sinister treatment by Alex Watson, his measured stillness and pent-up anger producing one of the funniest performances of the night. Vocally, Jackson Reedman as the Stormtrooper offered one of the strongest voices. The talented ensemble played, sang and danced their many various roles with conviction and strong attention to detail.

Director and Choreographer, Joseph Simons, was instrumental in bringing a cohesive whole to this work, his strong directorial hand managing a capable cast. Dramatically, the story developed at a brisk pace with first-rate timing allowing space for audience response, while keeping the action flowing. The characterisation of the various roles, including the ensemble, was meticulously developed. The last section of the play set in gaol felt a little under-rehearsed and confusing, but overall, he did a terrific job. The choreography and dance numbers were impressive and Simons created some marvellous stage pictures with the ensemble, particularly in the Act 1 finale.

Equally impressive was the quality of the musical direction and singing, under the firm control of Jacqui Devereux, with good articulation in the lyrics. The overall quality of the diction of the many diverse accents achieved by voice coach, Melissa Agnew, was very well managed.

‘The Producers was extremely well-realised by a talented cast and creative team with a genuine enthusiasm and an obvious desire to entertain.’

This show may not be everyone’s cup of tea, but seen as a period piece, with a light-hearted take on a perceived aspect of theatrical life, it is certainly immensely entertaining and a great deal of fun in our current times. Under Producer, Adam Gardnir, Altitude Theatre can be proud of this achievement. The Brisbane-based musical theatre company started work last year in the middle of the COVID pandemic, with a desire to make people laugh in the middle of tragedy, inspiring the choice of this musical. It was a brave but ultimately successful decision. The Producers was extremely well-realised by a talented cast and creative team with a genuine enthusiasm and an obvious desire to entertain. It plays through till 14 March and should not be missed!