Theatre Review: The Lifespan of a Fact

Melbourne Theatre Company plays fast and loose with fact and fiction.
Thuy On 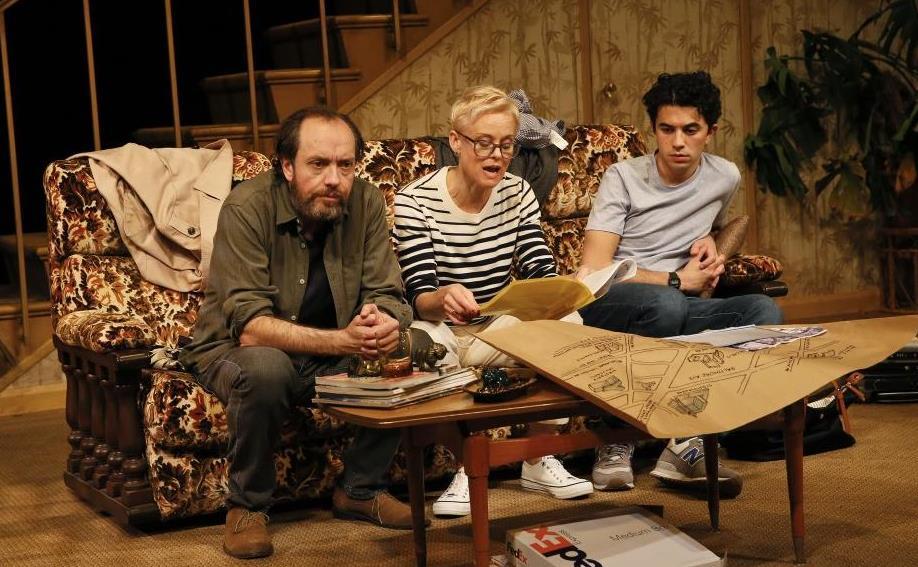 Steve Mousakis, Nadine Garner and Karl Richmond in The Lifespan of a Fact. Photo by Jeff Busby

We’ve all heard that old chestnut: don’t let truth get in the way of a good story and that’s exactly what The Lifespan of a Fact explores. It’s a short and sharp three-hander directed by Petra Kalive and is in itself a variation of the original play that originated from Broadway.

Based on the book of the same name by the real life players Fingal and D’Agata, this latest iteration by Jeremy Kareken, David Murrell and Gordon Farrell stars Nadine Garner, Steve Mouzakis and Karl Richmond. The sparring within the trio throws up notions of authenticity and fakery and the slipperiness and porousness between both states.

Graduate Jim Fingal (Richmond) is a new and hungry intern at a prestigious literary magazine when he’s asked by his editor (Garner) to factcheck essayist John D’Agata’s (Mouzakis) exploration of a traumatic happenstance in Las Vegas. The article is up for publication in five days, so there’s little time to do what a nitpicking editor does best. Nonetheless Fingal is a conscientious lad and finds fault straight away, within the first paragraph in fact.

Soon D’Agata’s 15-page masterpiece is accompanied by 130 pages of Fingal’s meticulous refutations of all the instances where the author has embroidered, embellished or straight out lied. The factchecker even consults maps, moon charts and traffic reports to build his case.D’Agata of course, pleads poetic licence in order to advance his storytelling. To him, facts can be massaged in the service of ‘Art’. He’s not beholden to mere details; he’s a big picture guy. He’s a prose stylist for godsakes, not a journalist!

The beauty of this play is that in Kalive’s deft direction the audience is able to see both sides of such polarised ideologies and though it deals with larger themes of life and death and thorny issues about just how ‘creative’ non-fiction can be, The Lifespan of a Fact is presented with a light, comic touch.
In his debut for the MTC, Richmond’s creation of the righteous factchecker is a delight; he’s a strong adversary for the cantankerous and self-important D’Agata —also played with supercilious conviction by Mouzakis. As a foil between them, a frantic Garner swings between trying to protect one of her most-admired writers, as well as her newbie hire and somehow trying to figure out whether the contentious essay can be published without incurring libel accusations.

Provocative and intelligent and oh so relevant in the era of fake news, It’s not surprising the play has had a long lifespan, in written and theatrical form. In the words of D’Agata, In the words of D’agata, it has ‘style and rhythm’. And that’s a fact.

The Lifespan of a Fact