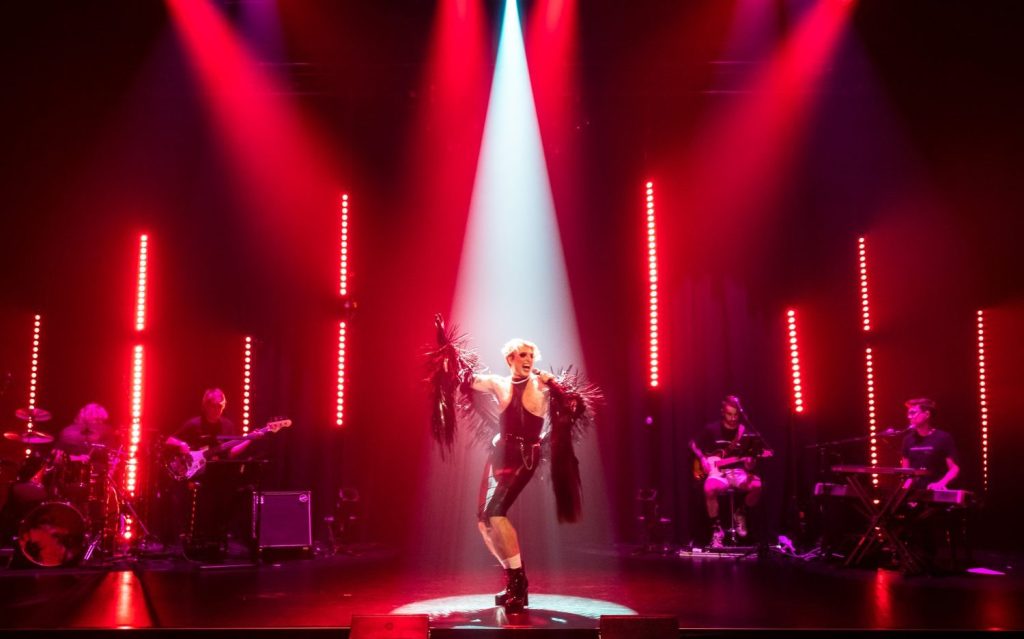 ‘Reuben Kaye exploded onto the stage resembling a character from The Rocky Horror Show.’ Photo by Darren Thomas.

On entering QPAC’s dimly-lit Cremorne Theatre, the audience was surprised to see an area that boasted a total reset, now resembling a cabaret club. Tables were intimately dotted around the room, with all offering excellent viewing of the raised stage, while a bar stood off to one corner. Smoke-filled air alluded to a 1940s ambience.

Reuben Kaye exploded onto the stage resembling a character from The Rocky Horror Show. With his black mini skirt, matching corset and a cape ingeniously designed from black plastic bin bags, he commanded the stage. Sashaying back and forth in six inch black patent ankle boots, his risqué comedy touched on politics, religion, sexual deviation and COVID, and had the crowd roaring with laughter.

With his four-piece band The Preferred Pronouns accompanying him, Kaye’s powerful and electrifying voice sets the scene for the evening to come as he sang up a storm before introducing his six guests, whose expertise ranged through cabaret, comedy, circus, drag and burlesque.

After Kaye’s raucous 30 minute comedy routine, pole dancer Charlie Love strutted onto the stage. In what looked like perilously high bondage heels, Love had the audience spellbound while performing an energetic striptease and pole routine.

Indigenous beatbox artist Hope One followed next with a poetry piece of her own work, Breathe. Next on the agenda was Ashleigh Roper, aerial artist extraordinaire, performing a swinging hoop routine high above the stage.

Drag artist Luna Thicc left a lot to be desired. Dressed in a red fringed pantsuit, she bounced onto the stage at a ferocious pace, careering from left to right and occasionally lip syncing. An absence of the three dancers who were meant to appear with her was disappointing.

Tina Del Twist appeared as a drunken cabaret vocalist. Extremely funny, her attempt to drink red wine from a fish bowl while a planted heckler in the audience yelled obscenities was priceless. With her vocal range, she stood out from the pack.

Kaye reappeared to introduce his top-of-the bill act, burlesque performer and fire artiste, Jacqueline Furey. She sauntered out, scantily clad in a G-string, pasties and a black silk chemise. Pirouetting centre stage before lighting and raising her two torches, she mesmerised the crowd while caressing the flames against her arms and legs before extinguishing the torches in her mouth. Her finale saw her slide the chemise to the floor, posing in a barely there G-string and pasties while blowing fire across the stage.

It was quite a night.

The Kaye Hole will be performed until 12 February 2022.