Outdoors Shakespeare for the young and old in this kid-friendly performance.
Isabelle Oderberg 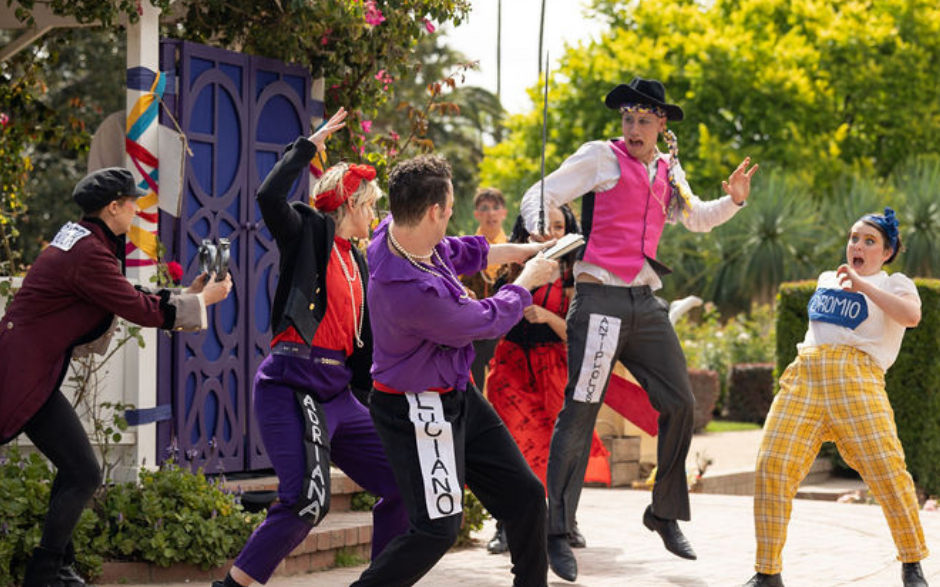 ‘A beautiful production, it was made even more enjoyable by the fresh air and rose scent, the beautiful summer sunshine and picnics a plenty.’ Photo supplied.

Like so many others, Shakespeare was all but ruined for me during my school years. A litany of terrible teachers and awful amateur productions with monotone soliloquies and tone-deaf monologues totally lacking any emotion, depth or insight meant I’m often reluctant to venture back into his work, such is my Shakespearean scar tissue.

But it’s easy to forget that Shakespeare was also a master of lighthearted comedy, which I remembered as I attended this production of A Comedy of Errors, enjoying myself thoroughly and feeling sad when it ended.

Performed in the glorious Rose Garden at St Kilda Botanical Gardens, the pacing of this production is fantastic and not a minute of the 90-minute production dragged. I particularly enjoyed some of the more contemporary references, which meant that the younger members of the audience were able to find some common ground and reconnect when their attention started to wander – it’s hard to keep the attention of a tween who’d rather be watching Netflix than doing pretty much anything in the world.

I was blown away by the generous acting, perfect comedic timing and effervescent energy. I truly hope they can keep that up during their matinee performances out in the open with little shade, as temperatures start to rise.

In a reasonably large cast, there were a host of strong performances across the board, especially among the leads, including the two sets of twins. One or two of the actors needed to project their voices in a stronger way to fill the large open space, but overall the acting really was very good. A few cast members do need to get slightly better at improvising when performing in public spaces – speech wasn’t paused for helicopters and the like, which made continuity a little bit difficult for some of the younger audience members.

But having said that, it’s really the perfect production for smaller kids to be introduced to the Bard’s work. My five-year-old needed some help following the storyline, but was ultimately able to catch up and enjoy it thoroughly, explaining it in great detail to his dad later on. Younger kids seated behind us just enjoyed the frivolity and colour of the performance, as well as the barbershop style music, which often comprised well-known pop hits.

Melbourne is blessed with outdoor spaces and while performances in the gardens are not new, they’ve taken on a new lease of life in the pandemic era. Many who are still uncomfortable with being in theatres with what feels like billions of other people may find more comfort in outdoor settings.

A beautiful production, it was made even more enjoyable by the fresh air and rose scent, the beautiful summer sunshine and picnics a-plenty.

The Comedy of Errors will be performed until 19 December 2021, with both matinee and evening performances.