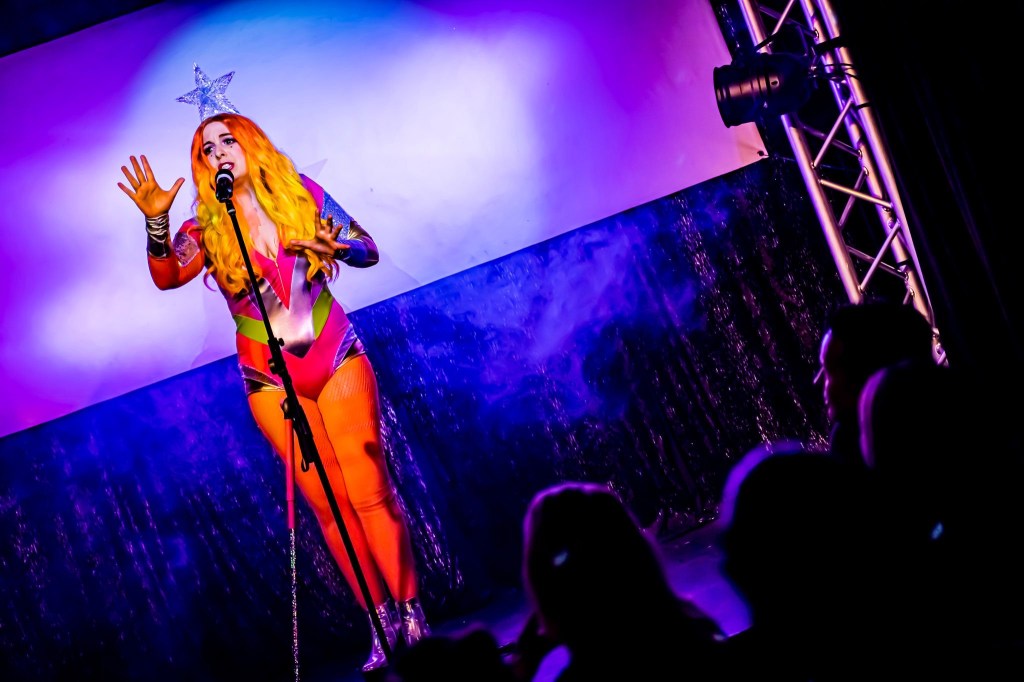 Live theatre being back in Melbourne is exciting, but the fact there’s a disability and chronic illness burlesque and cabaret show on offer makes it that much better.

Held in a cosy space draped in dark velvet within Trades Hall, the atmosphere was relaxed and welcoming from the outset. When host and performer, the ‘chronically iconic’ Rosie Roulette, entered the room the vibe went up a notch. This was an enthusiastic audience keen to see a cast – four or five different performers on each of the six nights – telling their stories through burlesque, circus, drag, song and more.

Rosie got the show started with a confident and energetic burlesque routine – made all the more impressive by the fact that they battle numerous conditions and associated pain flares.

At one stage they revealed a zebra-patterned outfit, which they later explained is in reference to zebras being the mascot of the Ehlers-Danlos Syndrome (EDS) community and a common expression heard in medicine: ‘When you hear hoofbeats behind you, don’t expect to see a zebra.’ In other words, medical professionals are taught to look for common ailments rather than test for a rare condition. In EDS circles, it’s important to remember that sometimes when you hear hoofbeats, it really is a zebra! This was just one of many fascinating facts the audience learnt over the course of the evening.

The night’s other performers included Kitty Obsidian, who put on a purposefully hilarious burlesque performance; Sugar St Claire, whose singing voice was angelic; drag queen Freida Commitment, who delivered a fabulously camp item in an immaculately over-the-top outfit; and Rosie, whose second act revealed they have one of the most incredible singing voices you could hope to hear.

A big highlight was the off-the-cuff interviews Rosie conducted with each performer. Covering topics including diagnosis, pain management, community attitudes, accepting help from mobility aids, and navigating a world that isn’t built for them, each of the artists had a unique story to tell, and was given a rare showcase to tell it.

As a performer, Rosie Roulette was immaculate, but as a host their skills seemed a little unpracticed. There were moments of slight confusion and delay as they got their head around the literal and figurative mechanics of the evening, and some of the interviews had uncomfortable moments, though in fairness it was the first show so subsequent sessions should be more cohesive.

At the end of the evening, the audience had been treated to a great blend of entertainment and education. The performers were talented and all had intelligent contributions to make and interesting stories to share. It’s a show that’s definitely worth supporting and will hopefully grow to become a mainstay in the Melbourne theatre scene.

The Chronic Cabaret will be performed until 12 March 2022, with some sensory-friendly and Auslan interpreted performances scheduled.