A play about domestic violence given new perspective through an all female, all Indigenous cast.
Jo Pickup 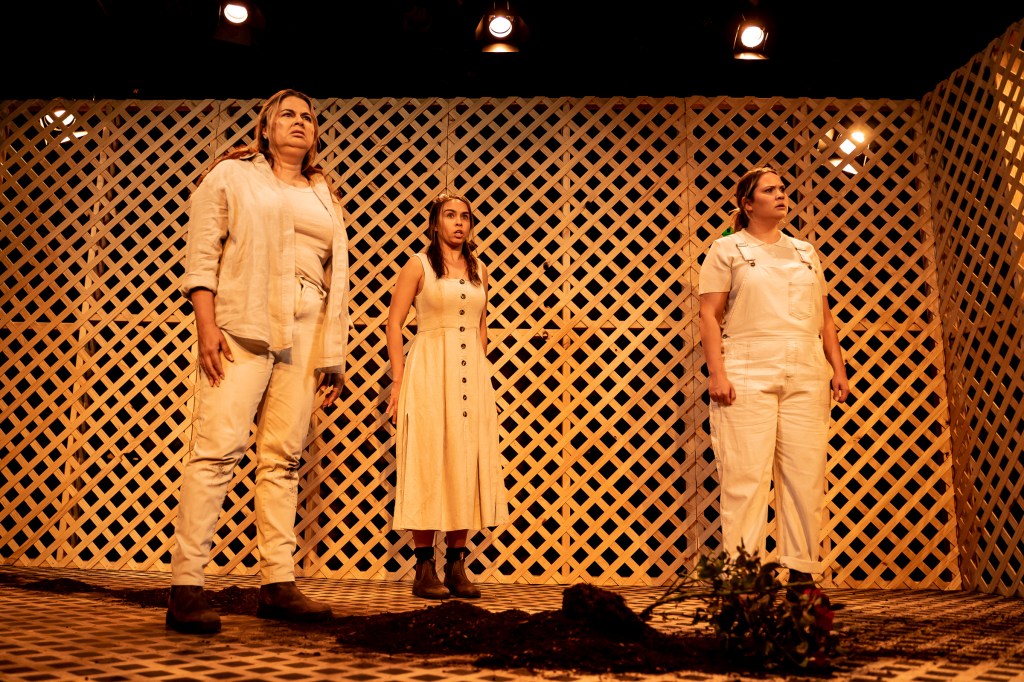 The play’s ‘ideas of shared pain, isolated suffering and complex societal guilt are foregrounded in a journey that is visceral, demanding and has lasting effect.’ Photo by Tashi Hall.

The Bleeding Tree is a 2014 play by Australian playwright Angus Cerini, widely considered his breakthrough work. After penning various scripts on the experiences of angry and damaged young men (Recidivist, 1997; Fuckwit, 1998; Wretch, 2009), Cerini’s The Bleeding Tree takes themes of Australian masculinities one step further through a hard-hitting story delivered entirely by women.

As a fearless work that casts close eyes over men’s violent impacts, the play has achieved widespread recognition. It won the Griffin Award in 2014, and its Sydney production (staged at Griffin, directed by Lee Lewis) got the 2016 Helpmann Award for Best Play.

For this independent season at Perth’s Blue Room Theatre, actor, theatre-maker and debut director Ian Michael (a Noongar artist) has given the work new life through a First Nations cast. In Michael’s hands, its ideas of shared pain, isolated suffering and complex societal guilt are foregrounded in a journey that is visceral, demanding and has lasting effect.

When we meet the play’s three female characters – a mother and her two daughters, played by Karla Hart (Noongar), Ebony McGuire (Noongar) and Abbie-Lee Lewis (Kalkadoon) – they are in a state of shock and disbelief. The have just killed their husband and father ‘with a conk on the head and a bullet through the neck’.

As they struggle to comprehend what’s transpired, they reflect on the interminable abuse they have suffered from this man. Their emotions sway between anger and grief as they spit out memories of his ‘pissed fists’ and habits of ‘showing things’.

The actors take a short while to settle in to their roles, but when they do, especially the young actors McGuire and Lewis, they show good range and some nuanced characterisations. The dialogue is highly charged, and the pressure never lets up as the three actors take us through the aftermath of their irreversible deed.

The actors’ delivery of Cerini’s text is impressive throughout, though at times there could have been more space between their rapid-fire words. Cerini’s style is rhythmic and well suited to pacey speed, but certain moments could have lingered a little longer to let their feelings seep in.

The play’s rich emotional continuum (which flicks hot and cold), is set beautifully by its lighting design (by Chloe Ogilvie). Its warm-yellow hues make bronzed shadows with Tyler Hill’s cross-hatched set, then eerie grey-blue states turn everything to mist.

Indeed, the work’s set and lighting have powerful symbolic effect. As we watch the women’s anxieties against their shadowy cage, we see their compromised freedoms with both darkness and light. Rachel Dease’s sound score is also effective on this note, as it backgrounds almost every scene with its gentle, low tones.

These artistic choices give the piece nice poetic edges. Having not seen previous productions, I can’t compare them in full, but it’s clear this creative team have recast the original in timely new ways.

Ultimately, as we watch the body of an unnamed, unseen, but ever-present man turn to bones before our eyes, we also see pictures of our society’s complicity and complex attitudes towards what’s going on behind closed doors.

Statistics shows that an average of one woman a week is murdered by a current or former partner in Australia. It’s an issue that has gained profile since books like Jess Hill’s See What You Made Me Do, and its subsequent SBS documentary that aired earlier this year. This play offers added insights into these disturbing issues, and in doing so speaks powerfully of the insidious tragedies that persist in the present.

It’s harrowing, yet full of heart, and it’s definitely worth watching.

The Bleeding Tree will be performed until 11 December 2021