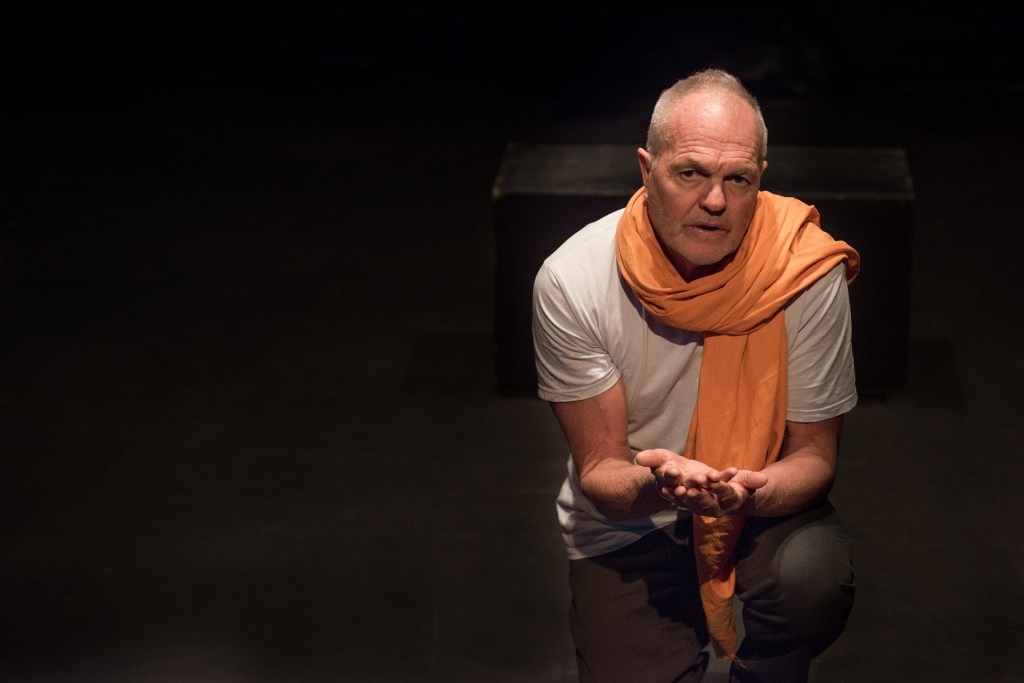 ‘It can be confronting being so close to your audience, like performing serious theatre in someone’s lounge room, but House owns the space.’ Picture supplied.

It’s safe to say Stephen House’s one-man show The Ajoona Guest House was probably not supported by the Indian tourism commission. Opening for its world premiere season in the tiny space of the Bakehouse Theatre studio (capacity just 40!), this is a gem, a diamond in the rough just waiting to be discovered. But it’s not for the faint-hearted – life here is excessive and chaotic, fuelled by drugs and desperation. It is a tragic journey into ‘the human hell of the New Delhi underworld’.

Stephen House is an accomplished actor and writer. These are his words and his experiences, brought to life with nothing but some sharp lighting (by Stephen Dean) and a little music (music and sound by Alain Valodz). It’s a black box with only a couple of orange saris and a small bowl of water as props. House is wearing a washed out piping hot T-shirt, the staple of Aussie back-packers the world over.

It can be confronting being so close to your audience, like performing serious theatre in someone’s lounge room, but House owns the space. Acclaimed director Rosalba Clemente, very well-known in Adelaide for her association with State Theatre, has worked with House to bring this excellent production to life.

The Ajoona Guest House takes us into the grimy back streets of New Delhi. These are the ageing hippies who arrived in India when they were ‘young and bright-eyed’ and have never left. The cheap drugs, easy sex and careless anonymity have kept them there.

From the front step of the Ajoona, ‘a dump with oodles of character’, to the drug dens and street markets, this is vivid, earthy, and confronting. The stories he tells are heart-breaking, not least because we know they are real. Children are scarred by their parents to make them more effective street beggars; a baby plays in the dirt next to a dead body while mum does her daily dose of heroin.

This work was first created when House was living in India a few years ago on an AsiaLink Literature Residency. It is the third in a series of stand-alone monologues, each an homage to a different city, written, published, and performed over the last ten years. The words have been polished and refined so nothing is wasted. Each moment is a searing observation, a heart-felt reminiscence, or a sad wail of frustration and futility.

One-man shows and monologues are always a challenge. Can the actor and the material sustain an audience’s attention for an hour or more? The Ajoona Guest House is a masterclass in getting it right. Highly recommended.

The Ajoona Guest House is playing until 11 December 2021