An endearing but flawed musical about coming to terms with one’s identity.
Tinashe Jakwa 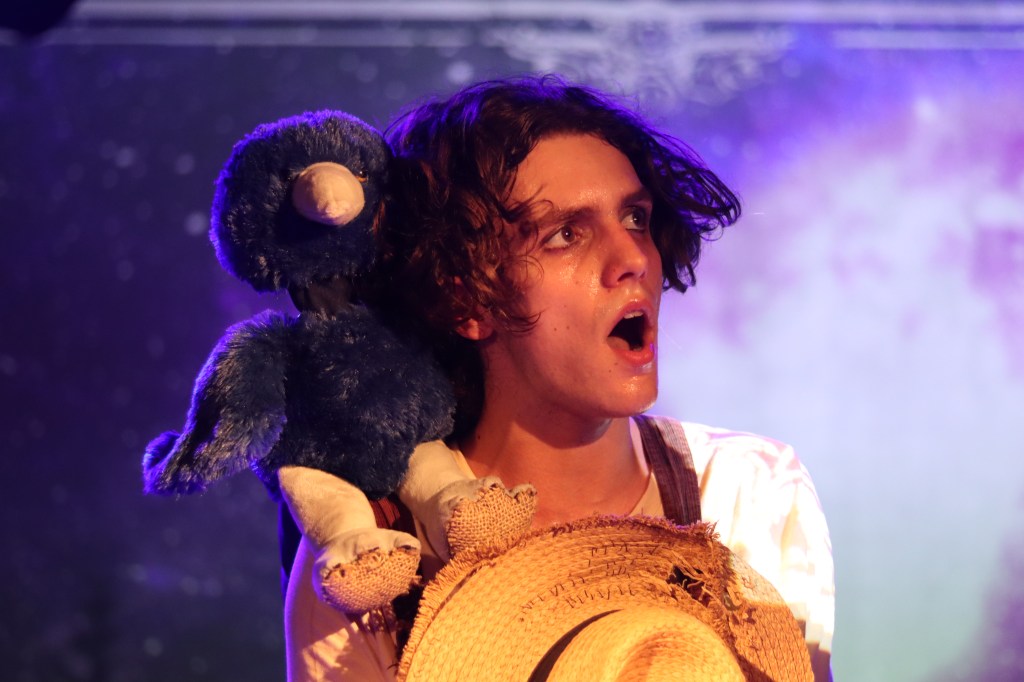 ‘StrawBrain is an original, multimedia musical that follows one scarecrow’s efforts to understand and redefine his identity after losing his ability to perform the only function he was designed to perform: scaring away birds.’ Photo supplied.

Ours is a confusing age. Many influences vie for our attention as we struggle to define and understand ourselves. And as we struggle, others proffer their own definitions of who we are and enforce their visions of the ‘good’ and meaningful life. This perilous terrain, which StrawBrain explores, can leave one disoriented and overwhelmed by the restrictive possibilities of this world.

Programmed during Fringe World, StrawBrain is an original, multimedia musical that follows one scarecrow’s efforts to understand and redefine his identity after losing his ability to perform the only function he was designed to perform: scaring away birds. An endearing one-act solo performance, StrawBrain was at once heart-warming and humorous in its exploration of the lifelong trial of self-definition.

Upon discovering that he has lost his ability to frighten off birds, StrawBrain (Noah Godsell) sets out on a mission to ‘steal the sun’, hopeful that it will provide an answer to his conundrum. In doing so, he is accompanied by a crow (Abbey McCaughan), brought to life through puppetry, that refuses to leave him alone. The musical’s minimalist set – a cross-shaped frame on a raised platform surrounded by sunflowers – is complemented by projected footage, photos and illustrations of landscapes and birds.

Beyond a compelling premise, the whimsical and charming physicality of Godsell’s performance was the musical’s main strength. In the stuffiness of Perth’s After Dark Gallery and Studio, Godsell did not hold back in his performance. Despite this, the musical had several weaknesses.

The show was characterised by poor writing and highlights the pitfalls of writers directing their own scripts. While it was rooted in a compelling premise, the story progressed far too quickly from one scene to the next and failed to explore the feeling and tension in each scene. Inasmuch as the audience could grasp the trial of self-definition that StrawBrain was taking on, neither the character nor the audience was allowed to sit with the discomfort of each stage of his journey. Here, the musical numbers were an insufficient bridge that proved uncompelling as the quality of the singing progressively diminished.

Given the demanding physicality of the role and demands of a solo performance, Godsell would have benefitted from more vocal training prior to the season. The puppetry similarly lacked finesse. It was not clear why the crow was depicted in the manner it was rather than relying on the minimalist visual projections of birds that had been established earlier in the show. In general, the visual projections felt rather indulgent at times, swallowing up Godsell and leaving little room for the performance itself. These elements, combined with the rushed storytelling, resulted in a very unsatisfying ending. While StrawBrain learnt the importance of self-definition and stopped understanding himself in others’ terms, befriending a crow along the way, the happy ending felt forced and predetermined.

Had someone other than Broadley directed the show, these weaknesses may have been addressed through collaboration, a fresh pair of eyes, and a different perspective. For the writer to also have been responsible for ensuring a multimedia theatrical success is perhaps too much to ask of anyone, especially those who are still emerging in their artistic practice. Nevertheless, StrawBrain was a fun and joy-filled musical with great potential. Neither good nor bad, it is a show worth seeing should it have another run in the future. After all, we need more tales – not less – that encourage us to be more discerning about the ways in which we define and understand ourselves.

StrawBrain was performed as part of Perth’s Fringe World from 26 – 29 January.