An exploration of teenage activism offers hope to the disenfranchised.
Jenna Schroder 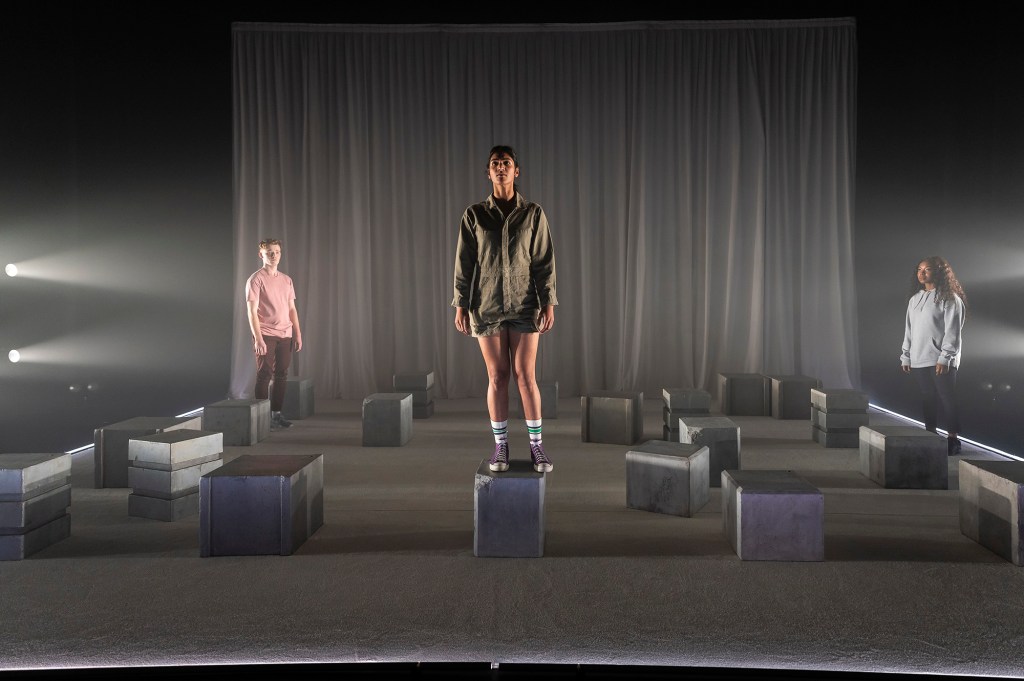 The play is ‘ is of the moment and unapologetically political.’ Photo by Tiffany Garvie.

Slap. Bang. Kiss. is a polished production created for teen audiences that sells a sanitised, idealistic interpretation of how to start a ‘revolution’.

It weaves three stories together that each feature a young person standing up for what they believe in. Immi, played by Tsungirai Wachenuka, lives under occupation. Sofia, played by Sarah Fitzgerald, finds herself in a school shooting. And Darby, played by Conor Leach, is trying to kiss another boy for a record 37 hours.

Director Katy Maudlin expertly utilises her team to show students across the state what a benchmark VCE Drama performance could look like. The use of bollard-like drama blocks is exceptional, providing seamless transitions between the three characters’ stories and constant transformation of the otherwise bare space.

The cast move the blocks and themselves around the stage as if by instinct and perform with great physicality, the audience never needing to question which role a performer has moved into.

Ian Moorehead’s sound design is particularly evocative, creating tension and elation when necessary and further supporting the quick smart transitions between stories. The sound design at times leads the energy and momentum of the production with the cast taking two or three more beats to catch up.

The play, written by Dan Giovannoni for Melbourne Theatre Company’s education program and shortlisted for the 2021 Victorian Premier’s Literary Awards, is of the moment and unapologetically political. Giovannoni frames the story as a showcase of young people’s power and their ability to kick start revolution. In reality, the audience is given a youth-focused summary of news coverage over the past five years rife with rallies, online viral moments and social upheaval.

Further, Giovanonni’s overall message is to ‘do something’. The audience, a generation most aware that action is needed, may well ask – do what? There is no answer in Slap. Bang. Kiss.

Nevertheless, the show is a great offering for drama students to learn from and elevate their own dramatic works –maybe even inspiring a few to create a loud and proud left-leaning play themselves.