Deploying the superpowers of honesty and wit to tell a story.
Lucinda Coleman 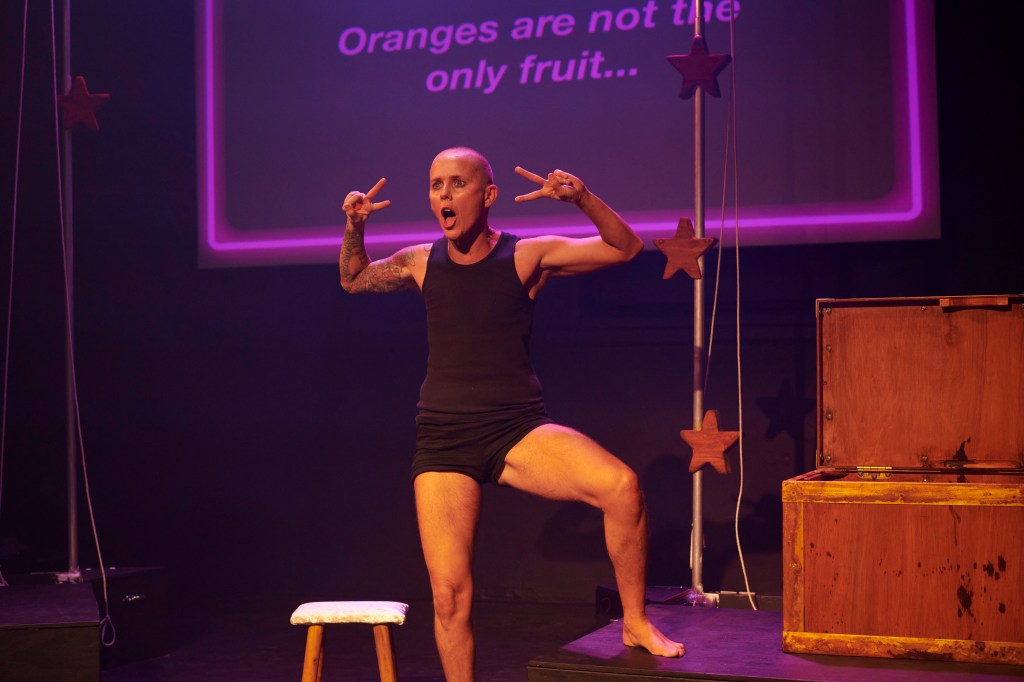 ‘Forget what you think you know about queer, transgender, or even Transperth.’ Photo of Stace Callahan by Kaifu Deng,

I’d like to introduce you to Stace. We met at The Blue Room after I took my seat to watch the solo show Queer as Flux.

A sparse set including a small dresser with mirror and stool on a raised box sits stage right; a smaller box on a block is stacked stage left. A screen for projection spans the rear wall. A figure in a rainbow wig strides to centre stage and Polly Tickle waves a sparkling wand (all good Fairy Godmothers have them) launching into observation, narration and reflection on identity and transitioning: ‘We’re all doing it’.

Forget what you think you know about queer, transgender, or even Transperth. Polly is a storyteller whose superpower is wit.

As Polly Tickle removes wig and make-up at the dresser, we meet Stace. With a click of fingers, images flick across the back screen, offering historical context for the unfolding autobiographical narration of an artist’s life in a ‘constant state of flux’.

Writer/performer/co-producer Stace Callaghan tells stories that resonate with unflinching truth and genuine humility, sharing personal experiences against the backdrop of 50 years of political and social turmoil in Australia depicted through projected photographs.

The narration is cleverly constructed: Callaghan shifts from vivacious commentary as Polly Tickle, to sharing stories about Stace at successive ages, noting which superpower was discovered through necessity with each episodic moment of change, loss, and transition. Callahan is a storyteller whose superpower is honesty.

Director/dramaturg/co-producer Leah Mercer gently moulds the actor’s movement in the small space, sensitive to historical contexts, the written words and innate power of the performer. Peter Young’s lighting design is minimal, bathing the actor and audience in soft hues to effect intimacy. Sound designer Olivia Cosham incorporates voice-overs, recognisable tunes, sounds of the ocean and that of whales who speak to Stace: ‘We are your ancestors’. Yet it is Stace who dominates the stage; a physical presence emboldened by confidence that comes from knowing who you are, regardless of how other people try to define you or which boxes you are supposed to tick on any number of forms.

Stace invites you to consider the mark-making on a body that has undergone considerable trauma and change. Stace is a storyteller whose superpower is strength.

You are invited to listen to Stace, the performer; you will most likely leave the theatre delighted at having met Stace, the human being. As for your superpower? You’ll never use personal pronouns in quite the same way again.