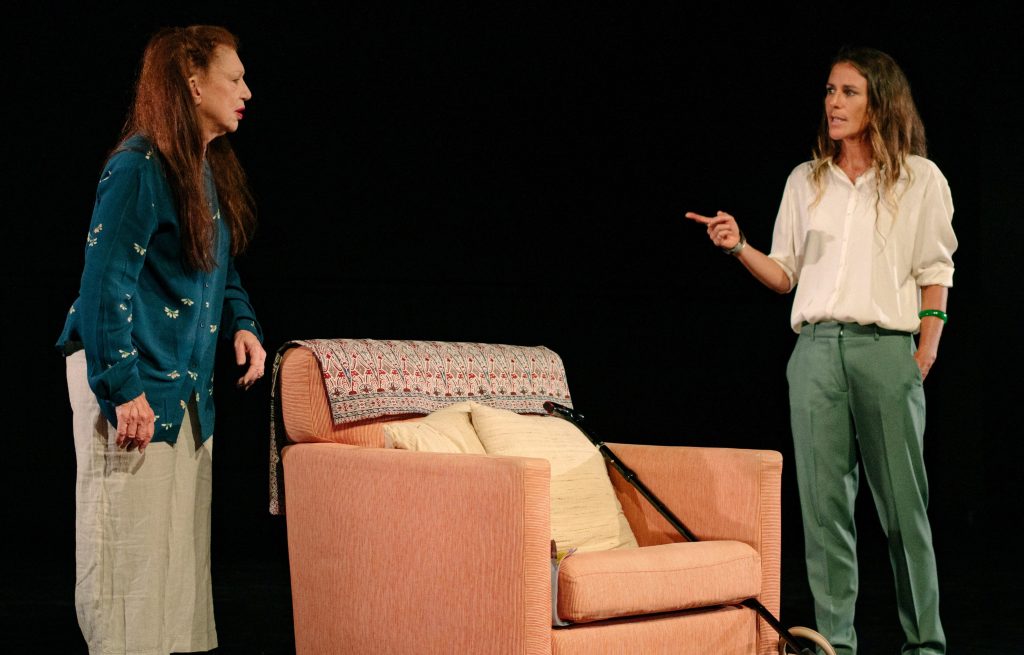 Performances from Sally McKenzie and Jules Allen ‘are near flawless.’ Photo by Cameron Grant (Parenthesy).

As the stage lights come up – revealing the interior of elderly Rose’s living room – the audience assumes a role akin to curious passers-by, peering in her window and bearing witness to the tumultuous end-stage of life that Rose has entered.

Rose’s physical and mental health is in rapid decline as dementia snakes its insidious way into her daily life. When her daughter Lucy arrives to help care for her, the past unravels in a blaze of mother-daughter bickering – outbursts fuelled by resentment and sentiment in equal parts. Each moment presents an erratic landscape of memories, emotions and impulses, some of which are gently humorous and others purely devastating.

From the opening scene, the performances by Jules Allen (as Lucy) and Sally McKenzie (as Rose) are near flawless. The script is real, raw and utterly believable, and allows for moments of levity among the weight of tragedy.

The staging, lighting and sound effects are sparse but highly effective. At centre stage there’s a single lounge chair and an ornate storage trunk that provides a visual link to Thailand, where much of the family’s tragic history lies.

Betty weaves multiple topics into a single hour – perhaps too many. Unveiling one trauma after another in such quick succession – abuse, inherited family trauma, cultural assimilation, denial, abandonment, blame and misunderstanding – felt like one of the play’s few faults. The pace at which the pain and suffering is revealed felt dizzying and overwhelming, especially for anyone who has experienced the impact of these subjects in their lives.

There are few miracles among dysfunctional families. None of us have magical powers that can transform the reality of ageing, life, and the mistakes of the past. What we do have, however, is the ability to have candid conversations with one another. Betty achieves this through an unfiltered exploration of one family’s story, and presents to the audience the uneasy fact that there is no simple, pain-free way to feel about it.

Betty will be performed at Theatre Works until 26 February.