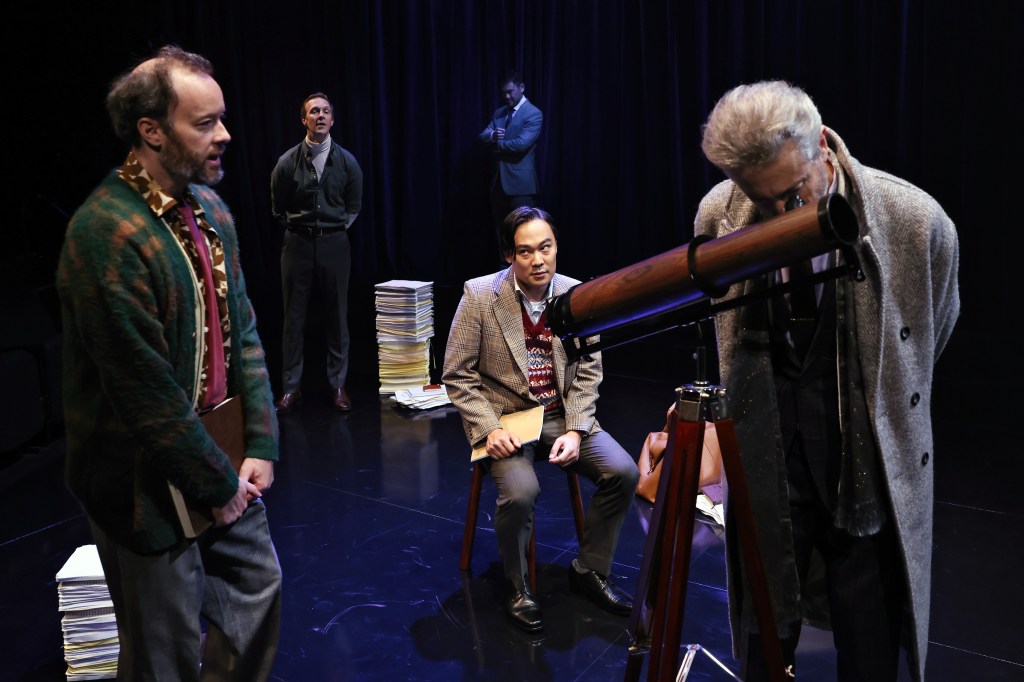 Nearer the Gods is David Williamson’s unfrilly and truly witty retelling of the discovery and writing of the laws of gravity. Photo by Prudence Upton.

The parallels can hardly be ignored: the Ensemble Theatre’s production of David Williamson’s Nearer the Gods was first driven off stage in 2019/2020 during the bushfires. The play itself is set in 1684, in the years following the great fire of London, and in the aftermath of the plague that stole over 68,000 lives. Are we in familiar territory?

There are countless precipice moments in the history of the world. The Age of Enlightenment contains many of these, and the accompanying figures who have been fossilised by historians, writers, and artists – who have fashioned these personalities and events into something nearer the gods than humanity.

The play takes place in London at the time of one of the greatest blues in scientific history, that between Isaac Newton (Gareth Davies) and Robert Hooke (Shan-Ree Tan). The supporting players to the central drama are Sir Christopher Wren (Sam O’Sullivan) and the glue that is Edmund Halley (Rowan Davie).

Nearer the Gods is David Williamson’s unfrilly and truly witty retelling of the discovery and writing of the laws of gravity by Isaac Newton and the publication of his Philosophiæ Naturalis Principia Mathematica. What sounds as though it may be a serious investigation and frankly nerdy retelling of a creation story of the discovery of gravitational fields, is really a dark comedy that relishes in seeing four of European history’s greatest scientific minds jockeying for first place to discover the mysteries of the universe.

This solid piece does what only confident productions can do well, there are no bells and whistles, no extravagant lighting or set design. The costumes designed by Hugh O’Connor are unassuming and suited to character by 2022 standards. The only set pieces offered are piles of paper and manila folders that double as seats and tables throughout the production. The whole play falls squarely on the skill of the actors, the director, and the script.

What is created is truly an ensemble piece, no pun intended. Every person on stage created a self-contained character that was believable, multi-dimensional and existed on their own merit. Gareth Davies is enigmatic as Isaac Newtown, capturing the anomaly of a genius: the embodied intelligence of mind, and the childish attachments to revenge and control. For such a neurotic character he was so funny, communicating the subtle enjoyment he derived from tormenting everyone around him. Rowan Davie was well cast as Edmund Halley. His gentle warmth and softness as a man who genuinely cares contrasts well with the created world of cerebral intellectuals around him. Davie has created a complex and patient man who successfully connects all the characters, carrying their stories through a completely present listening that imbues the whole stage with trust and integrity.

Sam O’Sullivan as Sir Christopher Wren holds an air that is higher than the king himself. King Charles II himself, played by Sean O’Shea is hilarious. So convinced of his own importance, his brash but subtle awareness of his fellow players and gift for the subtle dig at each of them makes O’Shea’s performance gut-laugh worthy, no matter how improper it may be.

A special mention must go to Claudia Ware, one of the two understudies for the production. On opening night, Ware stepped into play Robert Hooke at the last minute. Ware gave a strong performance as the arrogant and unlikeable Hooke. The coldness and institutionalised rigour that was presented through Hooke’s character gave the whole production a sense of urgency and forward momentum. Up against such a stellar cast of veteran actors who have had the opportunity to explore their one or two characters intimately, Ware held her own after learning the spectrum of characters, should any of the cast be taken by illness, floods, plagues or fires (this used to be facetious).

When coming to see a Williamson play there are certain assumptions I carried through the door that were validated. I expected there to be a traditional narrative. I expect the play to be well written, with no spare dialogue, and a pace that moves the play forward – naturally in terms of the theatre stage. I have come to expect an exploration of the masculine social sphere, usually set-in middle-class Australia. Even though this production was far displaced in setting and time, the exploration of this early academic, male dominated space was still very familiar territory, and transplanted Williamson’s familiar tropes into 1684 London seamlessly.

The Ensemble Theatre’s production of David Williamson’s Nearer the Gods was sharp and highly nuanced. With wit to rival dinnertime in the home of a family of ten, this bare bones production is intelligent and informative. It is sure to enthral math nerds and theatre nerds alike.

Nearer the Gods will be playing until 23 April 2022