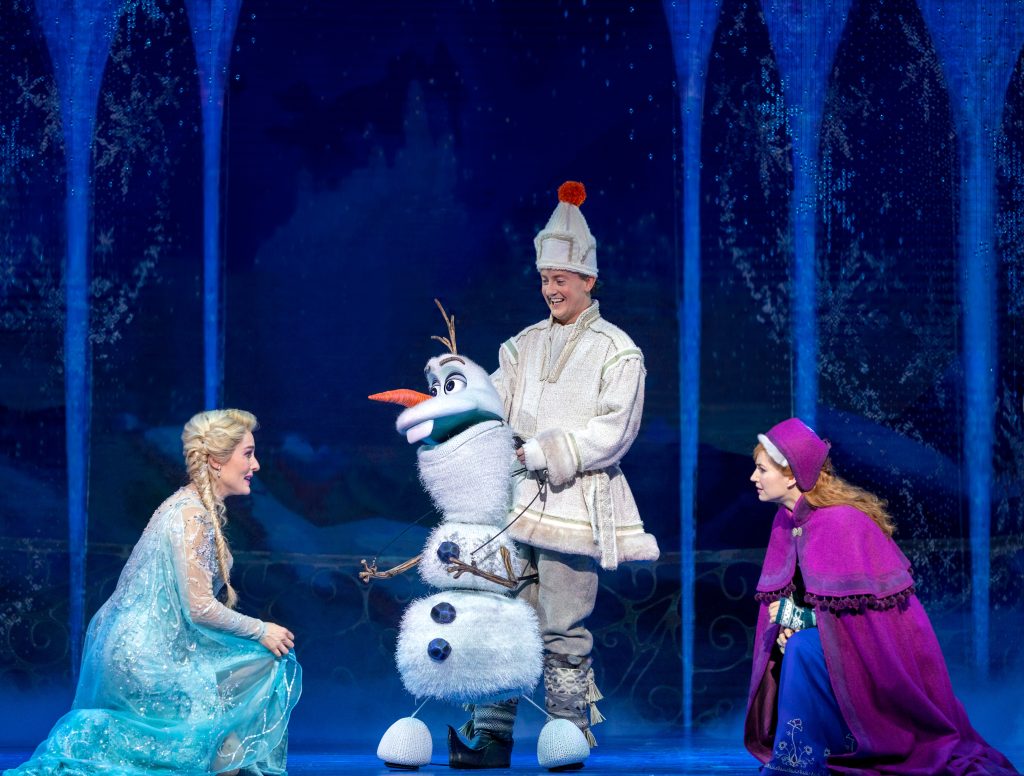 Many have seen the Disney films Aladdin, The Lion King and Mary Poppins, which were subsequently adapted for the stage. Disney Theatrical Productions have now created the award-winning Frozen, another stage spectacular, with the story based on Hans Christen Anderson’s The Snow Queen. This reviewer hasn’t seen the animated film, and I wondered how those who had would respond to a staged version.

Truth is there’s excitement and wonder in watching actors on a stage deliver live performance where the audience can see the cast breathing, singing and dancing in collectively propelled theatre.

There’s something universally appealing about Frozen’s plot, about a country turned into ice-scapes of glaciers, icicles, frozen lakes and heavy falls of snow. A condition caused by Elsa, a young woman whose magical fingers – her superpower – wreak havoc without her ever consciously intending to do so.

In the first scene, two sisters – are the broad American accents necessary? – are fooling around in the bedroom. Anna wants to go outside and build a snowman, which they do, but when the sisters return to their quarters they bicker. Elsa points her powerful fingers at Anna who collapses and almost dies. After this, the pair are separated for the rest of their childhood. The sisters as children were impressively characterised by child actors and the bond between them was heartfelt and believable.

As adults Anna and Elsa are distinctively portrayed by Queensland’s Courtney Monsma as Anna and Jemma Rix as Elsa, who sparkles as the impetuous yet gullible Elsa.

An array of cheery songs connect the narrative episodes and are enthusiastically delivered by a willing, charming, triple-threat cast. There are a few new numbers, with quality choreography including a cheeky vaudeville number where smiling ‘naked’ characters conga out of a sauna. (Parents be assured the cast wear concealing flesh-coloured costumes.)

In general, the show is a visual treat with floaty fairy-tale dresses and dazzling sets. Sven the reindeer has much appeal but the snowman who appears several times not so much.

An absolute standout of this family-oriented, feel-good entertainment – much needed in these troubled times – is the stunning lighting design. It generates thrilling surprises and does much to push the rather meagre plot along. In one scene, the chorus sculpt their bodies into a giant block of ice which is extraordinarily conjured through high tech devices.

Frozen will be performed until 8 May 2022