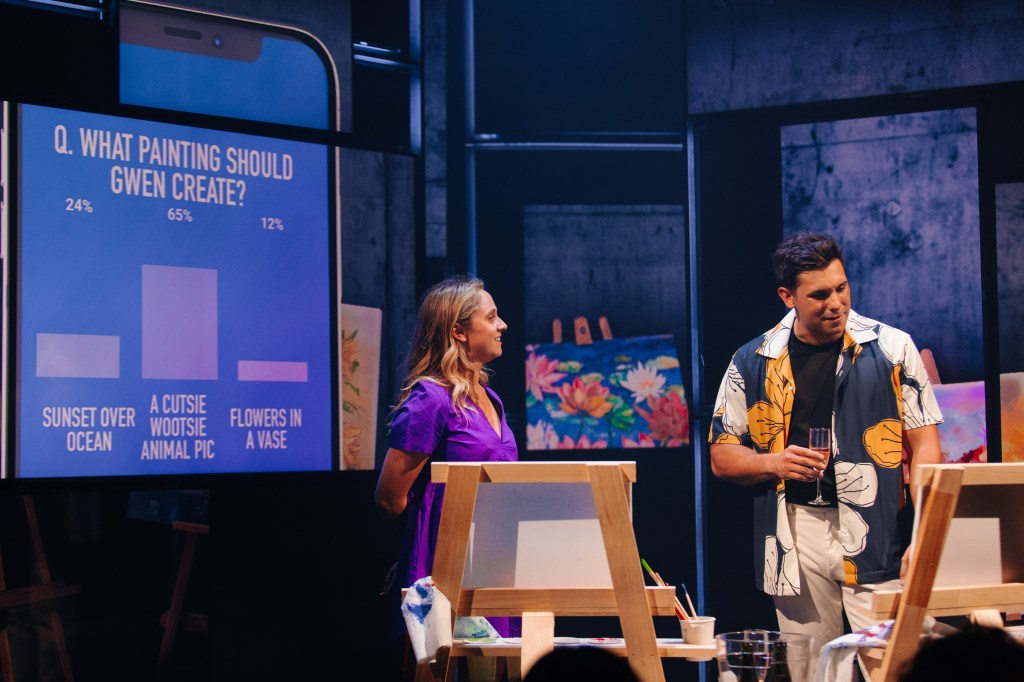 Forthcoming ‘brings to the stage awkward stories of dating that most 21st century Western women have endured.’ Photo of Cece Peters and Johnny Balbuziente by David Fell.

Forthcoming is a hilarious, sexy, and entertaining theatre rom-com that follows the adventures of Gwen (Cece Peters) on four Tinder dates. Siri introduces to Gwen her matches one by one: Sebastian the philosopher, the charming Italian Franco, the youthful and joyful Aaron, and Sandy who has a love of laughter.

Gwen’s dates are all impersonated by Johnny Balbuziente. It was amusing to see Balbuziente change characters using a variety of wigs, accents and body postures.

The show opens with the steamy scene of Gwen having sex with a doctor who specialises in ‘treating women…. with respect.’ But it turns out that this was just a wet dream and that Gwen’s sex life is non-existent. She has been dating for over a year, but all of her dates end up in drunken and embarrassing nights out with random strangers. As she gains an awareness of this dilemma, Gwen decides to date sober. Sometimes she succeeds, sometimes she doesn’t.

An unusual and interesting feature of this show is an invitation to the audience to use an app to vote and shape Gwen’s situation. Why Sebastian has a Nickelback ringtone, whether Gwen should order a salad or nachos on a first date and who she should go on a second date with are all subject to audience participation. The results were shown live on stage and the actors acted accordingly. However, this feature probably sounds better than it actually was. The fact that the results were shown live means that if only one person cast a vote, their vote counted as 100% and the graph displayed can easily influence everyone else who is voting. Nonetheless, this is a fun feature that makes Forthcoming unique and interactive.

The show attracted an unusual crowd to the theatre, and it often felt like being at the stadium with people shouting and cheering. It brings to the stage awkward stories of dating that most 21st-century Western women have endured. Both Peters and Balbuziente delivered great performances, but I found it disappointing that only the face of (reality show star) Balbuziente was used to market Forthcoming.

Forthcoming will be performed until 7 November 2021