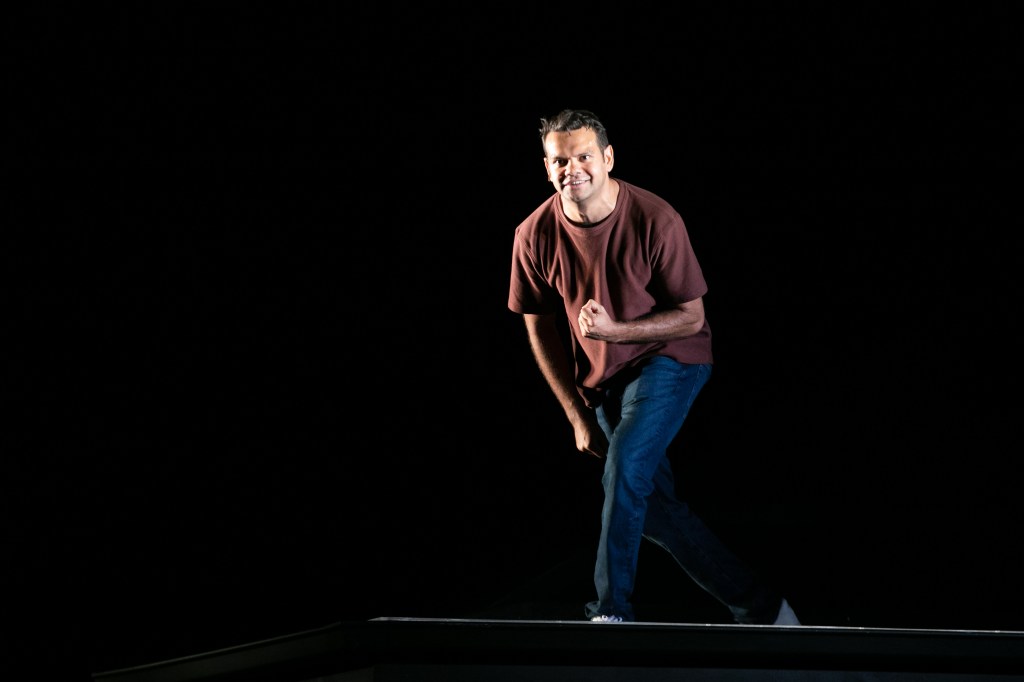 ‘Writer and actor, Meyne Wyatt, has created a play that resonates with power and passion.’ Photo by Daniel J Grant.

City of Gold by Wongutha-Yamatji man, Meyne Wyatt, is presented by Black Swan Theatre Company of Western Australia and Sydney Theatre Company as part of the Perth Festival 2022. After critically acclaimed performances in Brisbane and Sydney in 2019, the production was keenly anticipated and proudly supported by audiences in Wyatt’s home state.

Writer and actor Wyatt has created a play that resonates with power and passion. The semi-autobiographical narrative reverberates with confronting truths from the opening scenes to the final explosive moments on stage. Wyatt leaves nothing unexamined. His writing explores entangled themes of family, culture, politics, and history in contemporary Australia.

The evening commenced with a Welcome to Country by Whadjuk Noongar elder, Walter McGuire, who created space for storytelling through an offering of blessing. The opening scene then plunges audiences into howling confrontation with racist stereotypes, conflict of culture, and unresolved injustices. Wyatt’s writing is rapid-fire funny, and simultaneously sad, insightful and thought-provoking.

Director Shari Sebbens is intimately acquainted with the play having performed in the 2019 premiere season. She wisely lets the actors shine.

Tyler Hill’s set design is deliberately sparse. The skeletal frame of a ubiquitous rural dwelling yawns on the diagonal, not quite confronting yet not quite comfortable. The open verandah fronts a series of partitioned spaces alluding to other rooms, other places. Hill’s understated costume design is responsive to the domestic setting and unfolding narrative.

The house of corridors is brought to life through Verity Hampson’s lighting design that ingeniously illuminates pathways. Ghostly narratives of past and future are held in a suspended present.

The cast of actors are passionate, engaging and entertaining. Wyatt, as Breythe Black, dominates the stage with mesmeric movement and clever text. His character is a working actor, dealing with systemic and casual racism at every turn. A messenger bird comes for him. Breythe’s father has died, and he needs to return to his family home in Kalgoorlie.

As Breythe reconnects with his family, his sister Carina, played with intense focus by Simone Detourbet, drives the narrative forward. Ian Michael as Cliffhanger is a delight. The tension between Breythe’s brother, Mateo, beautifully played by Matthew Cooper, and Wyatt’s Breythe allows space for sparring perspectives. There is easy, affectionate interaction between Cooper and Wyatt, whose moments of exchange are the heart and soul of stories of grief, family, culture, and Country.

Wyatt’s opening monologue as Breythe in Act II provoked spontaneous applause from audience members. Standing on the roof of the verandah, Wyatt’s impassioned speech was searing truth: a reckoning. He was dancing text: standing, shouting, imploring, defying. His veracity was embodied as he declared, ‘never trade your authenticity for approval’.

The appearance of Trevor Ryan as Breythe’s father allowed for transcendence and goodness. As a deceased person wandering corridors, singing in language, his presence was a reminder that those we love are never really gone but continue to challenge, comfort and guide through the slippage of time.

City of Gold is theatrical truth-telling. Wyatt’s writing is an urgent call for understanding and change. It is time.