This tribute to the legendary Sarah Bernhardt examines her art, life and loves, alongside her passion to play Hamlet.
Suzannah Conway 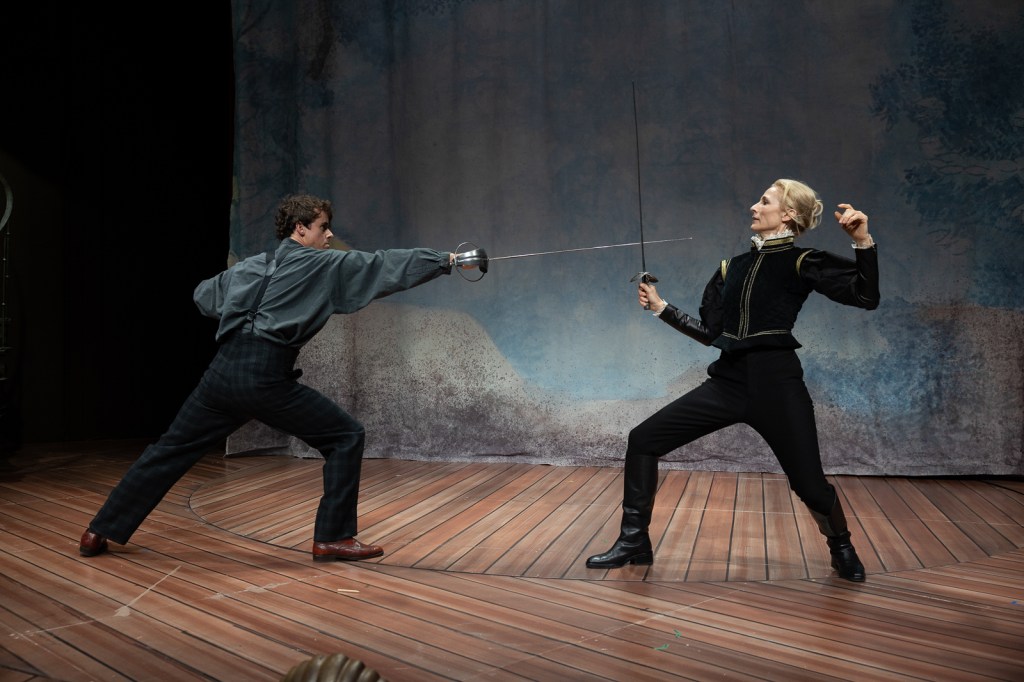 ‘As Bernhardt, Angie Milliken gave a finely nuanced performance; her lead character was proud and strong.’ Photo by Brett Boardman.

First seen on Broadway in 2018, American playwright Theresa Rebeck’s play is timely in its examination of the role that women play, not only in society, but on the stage itself.

Set in Paris in 1899, the unconventional Sarah Bernhardt is the darling of the French theatre world, predominantly for her portrayal of strong but desirable women, including the ever-popular Camille. Wanting to break free from that image, and no longer being an ingénue, she needs to find a suitable play with a role for herself that will be a box-office hit, and will prevent her theatre company descending into bankruptcy.

She turns to Shakespeare and to his greatest play, Hamlet. Astonishingly, and against all advice from mostly the men in her life, Bernhardt decides that she will play the role of Hamlet and is convinced her adoring public will love her for it.  It is an interesting premise for the play, based in fact, as the actress did eventually play the role with somewhat mixed results, and was scorned by critics and traditionalists alike.

The play opens with Bernhardt, dressed in men’s breeches, in rehearsal and examining the famous soliloquy from Hamlet: ‘O, what a rogue and peasant slave am I.’ She is perplexed with what it means and what Shakespeare is trying to convey. Much of the first act and some of second follows this trajectory, with her dissection of the role and character, assisted by her able troupe of players, who both support and grow exasperated by her in turns. There are some marvellous moments of hilarious comedy and thought-provoking theatre among the acting ensemble.

The scene with the Ghost is particularly memorable with Bernhardt insisting on exploring the essence of the father/son relationship. Likewise, Hamlet’s reaction to the arrival of Rosencrantz and Guildenstern in which she enacts the glorious text ‘What a piece of work is man’, which is powerfully realised. Woven around this exploration of Hamlet’s words is the love affair between Bernhardt and the writer, Edmond Rostand, who we later understand is in the middle of writing his opus magnus, Cyrano de Bergerac. We also get glimpses of what is being said in high society about a woman daring to play the Prince of Denmark. The critic, Louis, states directly to Bernhardt that ‘A woman with power is a freak’.

However, the strong development of this opening act changes direction in the second act, where Bernhardt’s fascination with playing Hamlet competes with a range of other scenarios, all impacting her life in different ways. Asking Rostand to rewrite Hamlet’s poetry for her, a near impossible task for the love-smitten playwright, leads to an electrifying encounter between Bernhardt and Rostand’s wife, Rosamond, one of the most powerful scenes in the play.

Beautifully controlled by both actresses, the outcome changes Bernhardt’s relationship with Rostand. Subsequently the play twists away from Hamlet to the production of Rostand’s Cyrano, including a brilliant duelling scene, where there are no rapiers but a fantastic sounds effects tape with clashing swords. Bernhardt’s adult son, Maurice, also appears in an intimate but brutally honest scene between mother and son.

However, the original play then started to unravel, in its attempts to cover too much territory, whereas a more linear approach elaborating on the original Bernhardt/Hamlet plot would have been more satisfying.

Despite these inherent weaknesses, the production values and direction were all splendidly realised with a thoughtful interpretation and some clever staging.  Queensland Theatre’s Artistic Director, Lee Lewis, brought the play to life with a firm directorial hand in a well-crafted, well-paced production. Her attention to detail with the injection of humour and passion across many scenes was first-rate. Set and costumes by Simone Romaniuk were of the French 19th century period and visually interesting.

A small revolve, used for a French street scene, café and dressing room, was enhanced by a clever stage setting of a theatre with curtains and backdrop. Veteran lighting designer David Walters, celebrating his 100th show with Queensland Theatre, gave us a wonderful palette of colours and period design. He managed equally to portray the gas lighting of the era in outdoor settings, as well as honing in on intimate indoor scenes, and adding considerable depth of interest to the diverse settings.

The actors were universally excellent, investing their characters with well-thought through lives and a studied attention to the smallest details. As Bernhardt, Angie Milliken gave a finely nuanced performance; her lead character was proud and strong, but with a fragility and lack of confidence in taking on the Hamlet role that was both touching and truthful. She strode around in her manly breeches with mannerisms and theatrical gestures that totally suited the character. It was a pity that vocally she was under-powered, as this greatly distracted from her ability to dominate the stage, even though her diction and presentation were first-class.

Hugh Parker as Constant Coquelin, Bernhardt’s offsider in the theatre troupe, gave a wonderful rounded performance. His knowledge of the Hamlet text was clearly second to none, and his portrayal of various characters, including an impressive Ghost, was first-class. Nicholas Brown’s Edmond Rostand, Bernhardt’s love interest was played as a charming, naïve young man obsessed with his muse. As the artist Alphonse Mucha, responsible for all those wonderful French impressionist posters, David Valencia gave a credible and passionate performance.

Both Wendy Mocke as Rostand’s wife Rosamond and Julian Curtis as the son, Maurice, had one scene each but both were powerful in those roles. As Louis, the acerbic theatre critic, Anthony Gooley was perfectly cast and suitably pompous. Amy Ingram was a delightful Lysette, her portrayal of a down-to-earth Ophelia quite hilarious. As members of the theatre troupe, Leon Cain as Francois and Gareth Davies as Raoul gave first-class performances in every one of their many roles, responsible for injecting much humour into the play.

All in all, this was a very good night in the theatre with a play that, while not perfectly realised, at least offered food for thought and fun entertainment. Plus, it was well staged, cleverly directed and with a strong cast of terrific actors.

It was a night of celebration for Queensland Theatre, as the Bille Brown Theatre, having been shut since the floods in February, opened again for the first time after a massive clean-up. There was a lot to be joyous about.

Bernhardt/Hamlet will be performed until 18 June 2022