The Neon Festival of Independent Theatre finishes on an outrageously high and hilarious note.
Liza Dezfouli
[This is archived content and may not display in the originally intended format.] 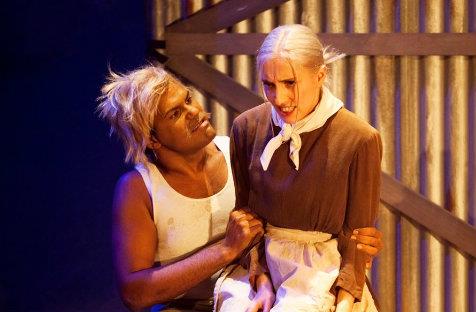 The Neon Festival of Independent Theatre finishes on an outrageously high and hilarious note with The Sovereign Wife, by queer DIY drag theatre company, Sisters Grimm. On opening night the audience was on its feet, hooting, cheering and clapping after a three hour extravaganza which deconstructs every historical, racist, sexist, hetero-normative, homophobic, cultural cliché about Australia ever depicted on screen or stage.

Declan Greene and Ash Flanders co-create every Sisters Grimm production with Greene directing. In this show, they say, they are retelling Australian history the way it should be told, employing an array of theatrical devices and conventions, old and new, arse-kicking all the while. Modern theatre itself has the piss taken out of it, and the result is too, too funny. If you’re lucky enough to get a ticket then by the end of the show you’ll suffer face-ache from laughing so hard and long.

A modern-day reporter goes bush to follow up an ancestor’s story and immediately everything happening on stage takes a mallet to the familiar and predictable, with the spiky big-city journo falling for the honest to goodness Aussie man … à la Sea Change.  And this is just the beginning.

We travel back 150 years to meet long-suffering but loyal Irish rose, Moira Enid O’Flaherty (Genevieve Giuffre to begin with until Ash Flanders takes over the role after the first interval and then Jason De Santis in the third act), and drunken husband Conor (Paul Blenheim) eking out a meagre existence on the gold fields. You name it, we’ve seen it but not like this. A diminutive ethnic Chinese actor (Felix Ching Ching Ho) plays an Aussie racist and later an Aboriginal manservant; blonde (female) Bessie Holland plays the big bad cop, Scott; Tiwi Islander De Santis ends up as Moira struggling through the desert to eventually find herself (sort of) in the outback.

There’s the lost child, Abigail (Peter Paltos); a wise blind native (Joesph Chetty); there’s bone-pointing; and Paltos delivers an unforgettable turn as a truly mashed-up inscrutable Oriental who gets some killer lines. Then there’s the horrible child out to destroy his mother; a pair of racist landowners; a handful of locals; respectable townsfolk; and a harlot with brutal business sense (Morgan McGuire) taken under the good Moira’s wing in an attempt at reform.

MTC staff sported items of kitsch Australiana for opening night; there was even an Aussie flag dress made especially for the occasion, a nice touch since Sisters Grimm’s work has – as is well-known around town – previously been politely rejected by the MTC.

The Sovereign Wife is a riot. It’s relief to see such rudeness, such anarchy, on the main stage. Nothing is as you’d expect. The finale is stretched out as far as it can go via a gloriously musical moment of original song performed by Joseph Chetty.

A most necessary type of historical revisionism, Sisters Grimm reveal how manipulated we are by stories and images that go unquestioned, by representations of men, women and history and a sense of national identity that becomes static and ‘normal’ when nothing is normal and everything is up for question. If it’s not, reckon Flanders and Greene, then it should be. More, please.