The Politics of Perception

Set intriguingly against a backdrop of energy and forestry industries is the current exhibition, The Politics of Perception by artists Debbie Symons and Jasmine Targett.
Mem Capp
[This is archived content and may not display in the originally intended format.] 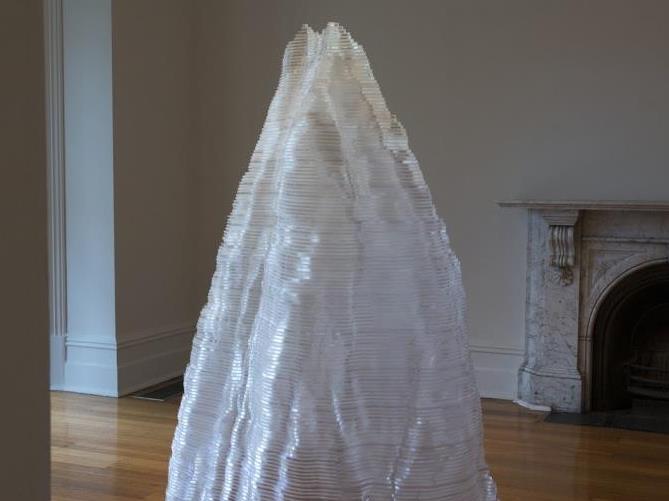 East of Melbourne, nestled between the Strzelecki Ranges to the south and Baw Baw Ranges, part of the Great Dividing Range, to the north lies the region of the La Trobe Valley. A significant centre for Victoria’s energy industry, the La Trobe Valley is known for its mining and burning of brown coal to produce electricity; producing around 85% of Victoria’s entire electricity needs as well as supplying some of New South Wales and Tasmania’s power requirements; it is also home to four of the highest electricity producing thermal power stations in Australia. Apart from power generation, this region is known for its timber mills, paper manufacturing and dairy produce.

Set intriguingly against this backdrop of energy and forestry industries is the current exhibition, the Politics of Perception, by artists Debbie Symons and Jasmine Targett, showing at the La Trobe Regional Gallery Morwell. It is part of the Melbourne-wide CLIMARTE festival, which seeks to harness the creative power of the arts to inform, engage and inspire action of climate change.’

Architecturally designed, the gallery houses seven spaces and a sculpture courtyard; its central location, along one of the main shopping strips in the town, gives it accessibility to a wide, cross-section of local and tourist traffic.This is important for an exhibition that aims ‘to raise awareness, create discourse and reflect on industry impacts.’ Perhaps more importantly however is the incongruity of such an exhibition in this region, and it was just this juxtaposition that drew Symons and Targett to chose the gallery. Their aim was to encourage people to reflect on climate and environmental issues such as ozone hole depletion, species loss and deforestation in the region, helping to bring it into the realm of mainstream consciousness.

Situated on the second floor of the gallery, the lighting in the exhibition space has been dimmed to maximize the effect of the digital projection on the far wall by Symons and the Perspex sculpture with reflective glass by Targett. Along the left side of the space sit three hand blown glass domes, also by Jasmine Targett. This is a minimal exhibition with a lot to say.

A five minute video, Amazonia, (2015) by Symons ‘interrogates the inextricable links between environmental degradation and free market capitalism’ in the Amazon basin. On first viewing it might reflect something akin to an abstract painting in progress; strong blue lines dissecting the green of the picture plane that soon become layered with areas of ochre and varying tones of brown. On closer viewing however it becomes clear that this is a visual mapping that documents the clearing and over production of irreplaceable rainforest over a 40 year period. Text tallies run along the bottom, quantifying the amounts of coffee, soybeans, bananas, raw sugar and cotton crops, to name a few, that have been produced over this period. Along the right side, figures indicate the threat to mammal, non-mammal and plant species in this area. It is frightening and illuminating.

Demanding the viewer’s attention on entrance, Blind Spot, (2014) by Jasmine Targett shimmers, its terraced curves of Perspex and glass capturing something that is both beautiful and yet ephemeral; a circular mirror attached to the ceiling above reflecting a foreshortened view of the object: encouraging, perhaps, the viewer to contemplate another way of seeing. One might become absorbed in the curves of the form or the luminescent qualities of the material until realizing that  ‘like an iceberg looming in space’ it symbolizes something more ominous, the discovery of the Ozone Hole and the implications that posses to life as we know it. Like the story of the Emperor’s New Clothes, what we want to see is not the truth which confronts us. Antarctica: Dissolving Perception, (2009), by Targett and Symons in finely blown glass, further examines the plight of Antartica. The three eye-ball like glass dooms act as a microscope, documenting decreased ozone over a 20 year period in the region.

The works of these two artists’ form a strong symbiosis, each an interpretive element for the other, building greater depth and meaning. The full impact of the works however demands time and effort from the viewer. This is not an exhibition in which to breeze in and out.

Finely produced works based on research and collaboration with both scientists and environmental data organizations, this is an exhibition on which to ponder and will keep you pondering all the way back to Melbourne or further.

Well worth a day trip!

The Politics of Perception