The House of Yes

Bright and beautiful. Dark and tragic. The production leaves you in that state of ecstasy pinched between joy and desperation.
Adelaide Fisher
[This is archived content and may not display in the originally intended format.] 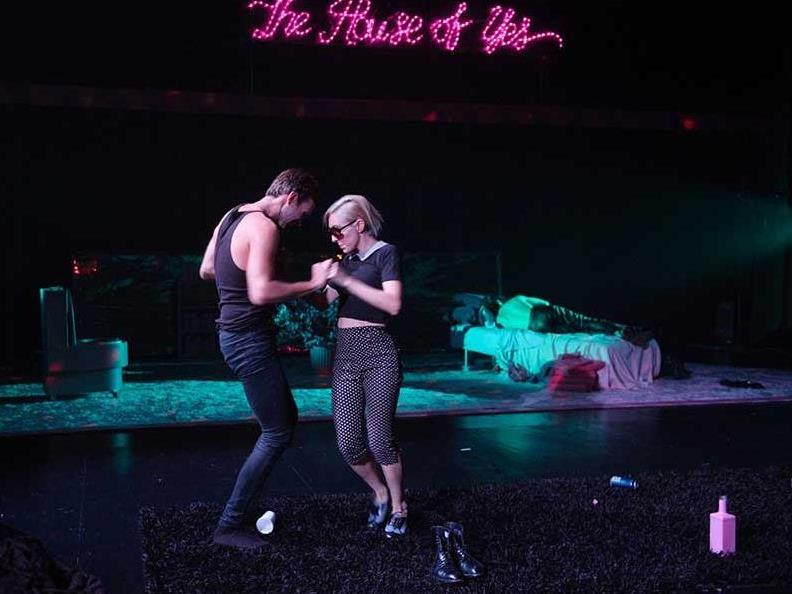 The Little Ones Theatre production of Wendy MacLeod’s dark comedy, The House of Yes is equal parts sensational, hilarious and moving.

The House of Yes is an examination of the amorality of a privileged America where nobody ever says no. Both political and deeply personal, The House of Yes tells the story of thanks giving with the Pascal family who are so used to being indulged that they have become as mad as roman emperors. Marty – the eldest son visiting from New York – is trying to introduce his family to his fiancé Lesly while his twin sister Jackie O attempts to reignite their incestuous love affair, their mother attempts to scare Lesly off and younger brother Anthony makes confused sexual advances on his future sister-in-law. All the while a hurricane rages around the family home.

Shortly after meeting Lesly, Mrs Pascal quips that the hurricane will probably blow them all to Oz to which Lesly replies that it was a tornado not a hurricane that features in Wizard of Oz. This portentous exchange sums up what is to come. Both Lesly and the audience have landed in an unreal place but it is far darker, more tragic and rotten than the sweet and whimsical land of Oz.

The production is expansively, indulgently camp, perhaps the finest example so far of the striking visual feasts for which Little Ones Theatre is known. Eugyeene Teh’s barbiedoll-esque set and Katie Sfetkidis’ inspired lighting design work together to create a world at once impossibly pink and impenetrably dark. The absurd and exaggerated staging, highly stylised performances, gorgeous choreography and playful lip-syncing numbers all contribute to the spectacle and the irresistible fun of the production.

In the author’s note of the play, Wendy MacLeod writes, ‘It’s a great mistake to imagine the play is ‘camp’ because the characters pretend to be Jack and Jackie Kennedy. To do the play that way is to undermine its emotional truth, and the love, however twisted, between the characters.’

But for director Stephen Nicolazzo this is a false dichotomy. Camp is not at odds with emotional truth and in this production they are as inseparable as the twins who feature in it. The audience is drawn in to the Pascals’ world, seduced by the vividness of the characters’ collective and separate delusions. Watching them you find yourself swimming against the current of the their amorality, fighting your way back to your own sense of right and wrong. Is there even a hurricane or is it just the howling of their collective madness?

The cast is pitch-perfect in their realisation of these characters. Green Room Award winner, Genevieve Giuffre is a deranged and electric Jackie O. She slithers across the stage in a way that is almost reptilian at times, pouncing on her twin brother and lover like a cat, snapping one-liners like a dominatrix’s whip. And yet she is bristling with pathos, painful and tragic and alarmingly self aware. She makes it easy for us to believe in what should be a totally unbelievable love story. Benjamin Rigby is deeply sympathetic as Marty as he struggles to maintain the shroud of normalcy that he has cultivated in New York with Lesly. We can see why it is so hard for him to escape the magnetism of their incestuous relationship but also why he wants so badly to be with Lesly and live a “normal” life. Anna McCarthy is superb as Lesly maintaining a flawless New York accent and bringing a warmth and genuineness to the role which Marty’s fight for their love all the more tragic and believable. Josh Price and Paul Blenheim are exquisite in supporting roles bringing an amazing level of depth and complexity to their characters.

Wendy MacLeod concludes her authors note with ‘some common questions’ about the characters and their motivations. In answer to these questions she write, ‘I will only say that every actor must present their character’s version with absolute conviction.’ These actors have done exactly that.

The House of Yes is bright and beautiful and dark and tragic. The production leaves you in that state of ecstasy that is pinched between joy and desperation. I cannot recommend it enough.

Adelaide Fisher is a creative writer and visual artist working as an events and communications manager to support her artistic habit.