Patrick White's play is glowingly brought to life in this Siren Theatre Co production for Griffin Independent.
Lynne Lancaster
[This is archived content and may not display in the originally intended format.] 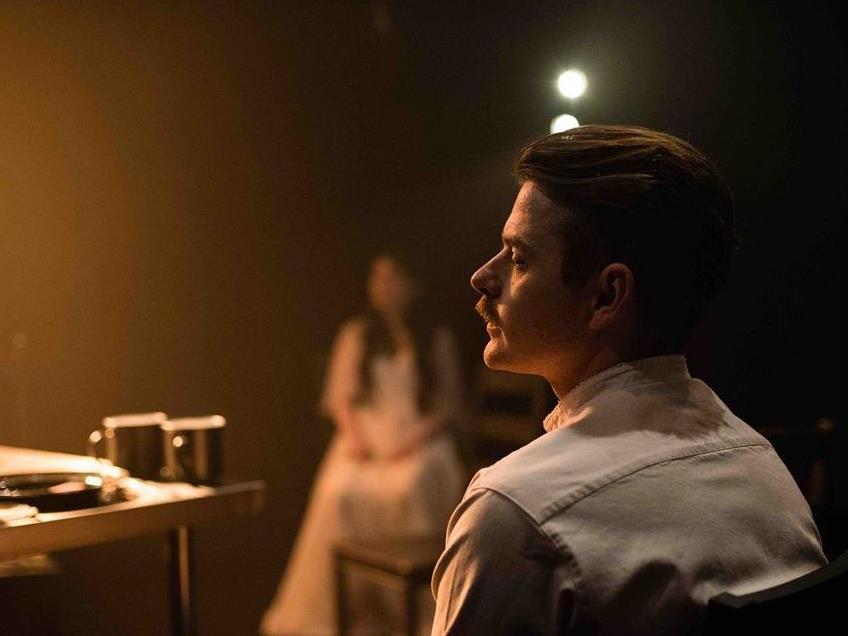 This is a breathtaking production of a landmark play, riveting and humorous. Under Kate Gaul’s magnificent direction for Siren Theatre Company/Griffin Independent the strong cast give a terrific performance.

Written in 1948 by Australia’s only Nobel Laureate for Literature, Patrick White, and infamously rejected by the Adelaide Festival in 1962, the play was inspired by a painting called The Dead Landlord, which William Dobell painted shortly after helping his own landlady lift her husband’s corpse onto the bed. The play is set in a dingy rooming house in post WWII London and is part lyric poem, part gothic drama; a strange, absurdist and disturbing analysis of the human condition.

This version had a very Australian (rather than London) atmosphere but it could be set in either city.

White’s play follows the story of a young, would -be poet (the Young Man) and the increasingly perplexing relationship he shares with his landlady, Mrs. Lusty after her husband’s sudden death. We then see an unsettling, spirited pursuit of a young man by the grief-stricken widow after the relatives have departed the lavish wake (the titular Ham Funeral).

Written prior to the crucial works of Samuel Beckett and Harold Pinter, close attention is paid by Gaul and the cast to the visionary text which is at times lyrical, featuring heightened poetic language, and at other times is bawdy and vulgar.

Jasmine Christie‘s set is minimalist, rather cold and clinical. The stage is black and reflective and there is a table in the middle of the stage. A couple of chairs are also provided. Various handy props (food, cutlery, garbage bins etc) are carried on and off. Hartley T A Kemp‘s lighting is intense and eerily atmospheric.

Tall dark and handsome Sebastian Robinson is The Young Man (Mrs Lusty calls him Jack but that is not his real name). An unworldly poet manqué, he acts as narrator at times and we see how his life is completely changed and his innocence corrupted once he helps Mrs Lusty and becomes involved in planning his landlord’s funeral. He has a wonderful opening monologue introducing the play; assuring us it is as usual, ‘a piece about eels’. Thereafter we follow The Young Man on his moral and spiritual quest of self-discovery, initiated by his salacious landlady, Alma Lusty.

The opening scene introduces Mr and Mrs Will and Alma Lusty. When Alma invites their tenant for tea, Will (Johnny Nasser) is shown as a quiet and reserved, somewhat scruffy pipe smoker, whose only audible sound generally is his heavy breathing. He is casually dressed in shorts, a dingy top and slippers and mostly now communicates in groans and grunts.

Will Lusty has a short moment of dynamism when he upbraids Alma about her affairs, but then he suddenly collapses. Once she has enlisted The Young Man to help her with Will’s body, Alma then plans an imposing funeral at which the mourners will eat ham.

From there, Alma’s rollicking coarseness becomes even more obvious, highlighted in Act 2 when the Four Relatives come to attend the funeral.

Alma Lusty is a marvellous, show-stealing part and Eliza Logan is superb in the role – insatiable and sordid. She was captivating, catching the misery of her trapped, dreary, rather boring existence and we see how her barely hidden emotions range from loss, love, weariness, lust and despair. She also brings out the comedy in White’s script. In Act 1 she is tawdrily dressed in semi-negligee; in Act 2 she wears full mourning clothes in an incredible ensemble with gloves and a fabulous hat.

Guided by his beautiful ghostly alter ego (Jenny Wu, in a luminous performance) the Young Man becomes caught up in Mrs Lusty’s attempts to seduce him. The Young Man gives a very atmospheric description of the eerie house, with the poignant mention of the Lusty’s dead child, normally never talked about, and the previous accidents on the stairwell.

Fine ensemble work from the whole cast included the four, rather menacing relatives (Johnny Nasser, Andy Dexterity, Jane Phegan and Carmen Lysiak) who are presented in a perhaps cartoonish Absurdist or Expressionist style, with strange, over the top makeup yet dressed rather contemporarily.

In Act 1, two ladies (Jane Phegan and Andy Dexterity) are shown as strange, dumpster diving scavengers who unwittingly unearth a disturbing secret. Are they ostracised socialites? Part-time sex workers perhaps? Are they White’s way of representing the decay and decadence of society? As in Shakespeare they provide social comment and comic relief.

This is a fabulous production of this at times grotesque, mythological, symbolic, challenging and grippingly dynamic play.