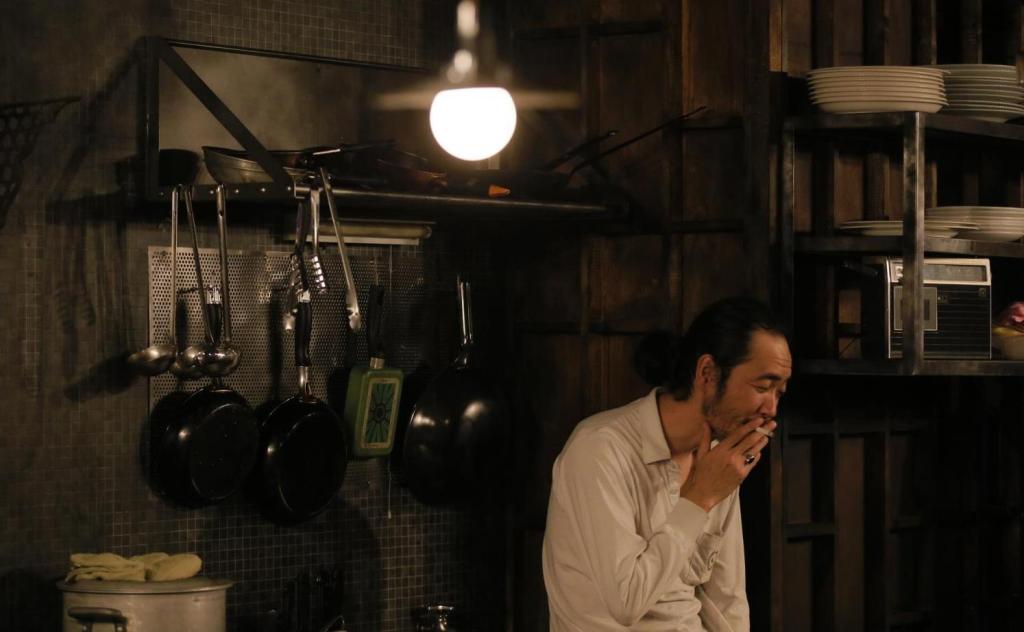 Based on a story by Marei Karibu and the work of Haruki Izumi, Kuro Tanino’s play is a multisensory experience. Photo: Takashi Horikawa.

The Dark Master is a humorous story set in Japan about a young traveller who is convinced by a bistro owner to cook on his behalf while he instructs via an earpiece. The production includes a skilled cast, a beautiful set and crafty use of sound. The production is thoroughly entertaining but leaves many questions lingering after the lights go down.

The story captures the journey of the young protagonist from naïve and clueless to a confident chef. The journey is full of hilarious moments that illustrate how the bistro owner is reliving his youth through the traveller. If this had been all there was to this show, it would be a hands-down delight, however the script tries to go deeper. It mentions an economic bubble that made the bistro owner a success only to pop later and ruin him. This seems to have little impact on the production but raises questions about why the bistro owner has taken in this particular traveller. The Chinese also start to buy up the properties around the bistro and intimidate the traveller but their relationship doesn’t extend beyond a fight. This causes the show to close before it’s clear what will happen to the bistro.

The comedy could be considered exaggerated but within the realistic set, the play feels grounded. The set facilitates the young traveller cooking numerous dishes live, filling the auditorium with delectable aromas. The old television in the bistro is also used to display titles marking the time, a subtle approach that maintains the illusion of being in Japan.

Sound is also used as an immersive element. Every audience member is given an ear piece to hear the bistro owner’s directions through. It places the audience in the middle of the story – enabling an experience of the directions and the bistro simultaneously. The comedy is boosted by this choice and by having only one earpiece per audience member, the live sound is still crisp.

The video used in the production feels out of place as it gets in the way of enjoying the action on stage. At the start, the story sets up that there are cameras around the bistro so the owner can see what’s going on while he gives instructions from upstairs. However, when the video is made available for the audience to see via a large projection screen above the main stage, a tourist is also using his phone camera. It becomes hard to identify if the perspective is the owner’s or the phone camera as the video doesn’t align with either point of view. This is an element that director Kuro Tanino could’ve skipped without consequence.

The actors are an absolute hoot throughout the performance. They push their reactions slightly beyond naturalistic, turning chuckle-worthy moments into laugh-out-loud experiences. As the young traveller, Koichiro FO Pereira sustains his high energy level, keeping the show lively even during the script’s detour to half-baked deeper moments. The cast is also surprisingly large, with eight actors, but each actor performs as if they have the main role, helping the bistro to feel lively and busy in the young traveller’s highest moments.

The Dark Master provides a delightful experience with jokes that never fall flat. While the use of video could’ve been skipped, the inclusion of live and in-ear sound make this a standout experience. The cast are as strong as the creative choices in the production and counteract the elements of the script that don’t fit. It’s hard not to smile all the way through this show, and hard to leave without craving Japanese food.