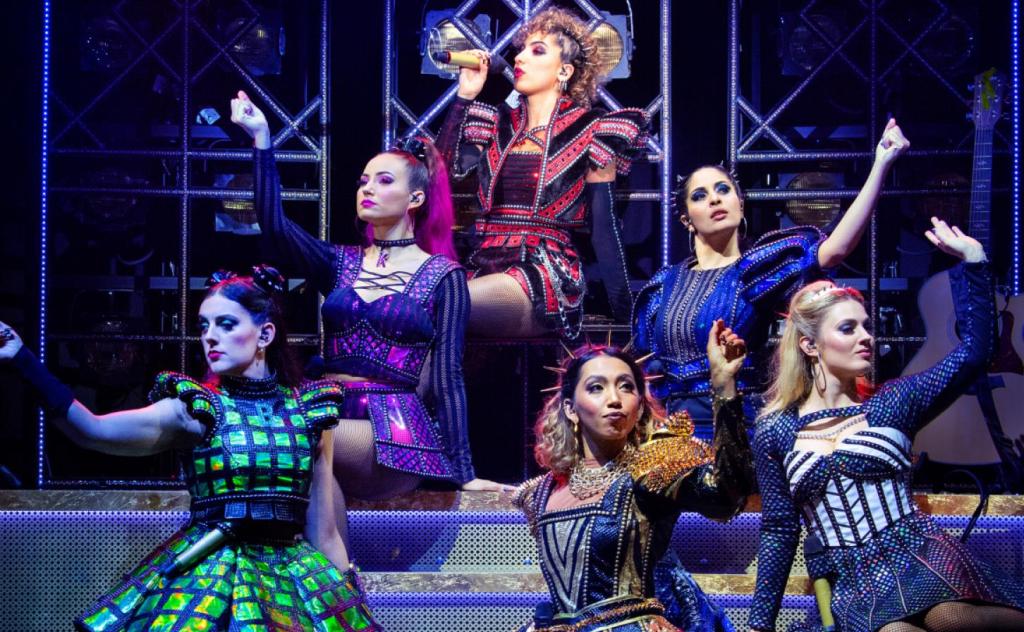 The cult phenomenon Six, which passed 50 million streams of its album in September last year, has landed on the Sydney stage with a raucous version of Renaissance Girl Power.

The six of the title refers to the wives of England’s King Henry VIII who, desperate for a male heir, famously married six times and found ways to get rid of each of his spouses when they (literally) didn’t deliver. English schoolchildren learn of each queen’s fate via a rhyme: ‘divorced, beheaded, died, divorced, beheaded, survived’. Six puts this grizzly story to music, with each of the queens, in 16th century girl-pop style, telling their story in an attempt to out-do the others for the questionable honour of being the one who had to deal with the most ‘BS’ from their husband.

The ‘Beheaded Live Tour’ is a kind of English version of the Hamilton musical, with more than a nod to the 90s princesses of pop, the Spice Girls. The queens are also given abbreviated names that are suggestive of contemporary celebrities while helping to distinguish the various Annes and Catherines. Aragon (Chloe Zuel) is Scary, Boleyn (Kala Gare) is Sporty, Seymour (Loren Hunter) is Baby, Cleves (Kiana Daniele) is Ginger, and Howard (Courtney Monsma) is Posh, leaving Parr (Vidya Makan) as the non-Spice to reflect on the action at the end of the show. But the music also takes inspiration from divas Adele, Beyoncé and Alicia Keys, blending pop with ballads and hip-hop.

The lyrics, penned by Toby Marlow and Lucy Moss while they were undergraduates at Cambridge University, are witty and clever. When Seymour asks what could hurt more than a broken heart, Boleyn quips, ‘a severed head?’ There isn’t really a plot, but the songs are sharply written and performed. Cleves reminds us that she lucked out, never having to consummate her marriage while claiming a pre-nuptial palace on the river Thames after just six months. Boleyn complains of her more gruesome fate at the guillotine and Seymour, who died in childbirth, laments that she was the only one Henry truly loved.

There’s a touch of contemporary politics thrown in to the mix, as Howard tells of the many men who abused her, just because they had the power to do so. Wife number six, Parr, reminds us that she was a writer and a champion of girls’ education, but all she’ll be remembered for in history is the fact that she was Henry’s last wife, who survived. Perhaps predictably, the story ends with the Queen’s taking back control of their history – making it her story – in the finale.

The show originally played as a student production at the 2017 Edinburgh Festival Fringe, but quickly transferred to London’s West End, where it was nominated for four prestigious Olivier Awards in 2019. This production, which had its Australian premiere in Sydney and will travel on to Melbourne, has a young and talented cast, who have mostly graduated from Australian musical theatre courses in recent years. The Australian show was put together with a short rehearsal period, but it doesn’t show. The performers are a collective force, sparring with each other and driving the face-paced show forward. Gare’s Boleyn and Daniele’s Cleves are sassy and kickarse, while Monsma delivers an emotionally charged performance as Howard, and Makan hits some pretty impressive high notes while telling the story of Parr. The band, led by Claire Healy, are a cool black-spandexed crew, the Ladies in Waiting, tightly performed by Claire Healy, Ali Foster, Debbie Yap and Jessica Dunn.

The staging of Six is apparently part of an Opera House push to diversify its audience. It’s a smart move, with 50% of audiences visiting for the first time. Tickets for this production are selling out fast, so if you want to be part of the phenomenon, you’d better grab some fast.