Three Shakespearean plays performed back to back over six hours, and exquisitely performed, makes for electrifying theatre.
Richard Watts 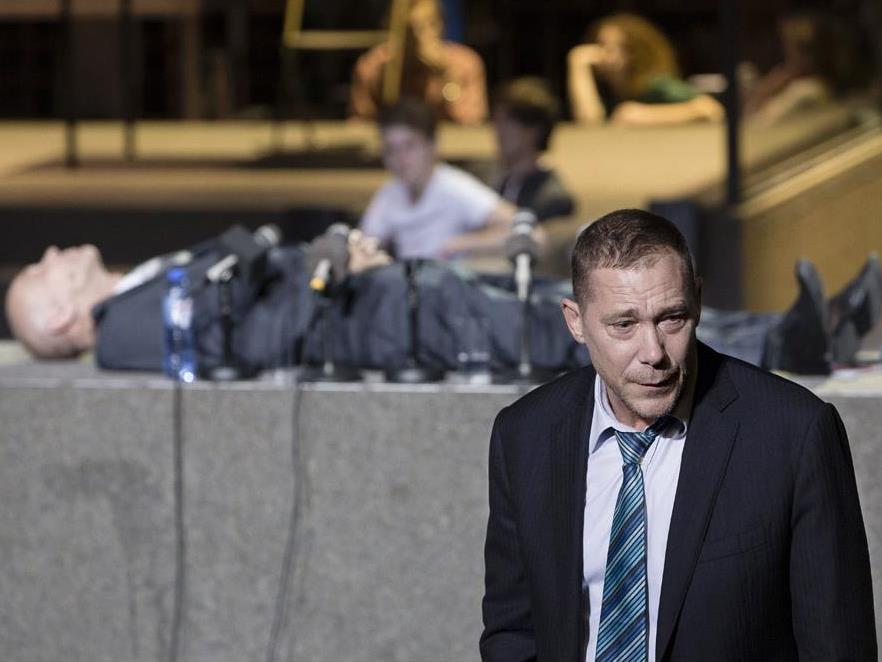 If six hours of Shakespeare in one sitting sounds like a slog, don’t fret: Dutch theatre company Toneelgroep Amsterdam’s Roman Tragedies – a compressed and compelling staging of Shakespeare’s Coriolanus, Julius Caesar and Antony and Cleopatra – is not a chore to sit through, but a privilege.

Even the set-up of the production is fascinating. Instead of being passive viewers, audience members are actively invited to move around the auditorium throughout the evening, even joining the actors on stage, where coffee, cakes and drinks are served, and computers are set up so that we might check our emails and share our impressions of the night on social media.

The set, like the costuming, is modern: actors in suits and stylish dresses lounge on grey couches and stand on low rostra, ready for a political confrontation or a press conference at a moment’s notice. The attention to detail of the contemporary setting is applied consistently and intelligently throughout. Instead of hiding his face beneath a cloak and cowl, Brutus pulls down a baseball cap to conceal his features, and Mark Antony’s armour is a business suit; his servants adjust his tie and cufflinks when he bids them tighten his armour’s buckles.

Dotted across the stage are numerous televisions which show edited images of real events, from natural disasters to screen grabs of warfare and campaigning Adelaide politicians, further emphasising the of-the-moment tone and the political themes of the work. Beneath the main video screen, headlines crawl in red LED text, describing both real world events and key moments from the plays that are not staged – such as the war between Rome and the Volsci in Coriolanus – and forewarning of the major characters’ impending deaths. Though the production is performed in Dutch, surtitles of Tom Kleijn’s lucid modern translations are cleanly projected and easily readable; and the constant use of live video throughout not only ensures that one rarely misses a moment of the drama, but actively adds to the work by carefully compiling striking cinematic images that reveal the actors’ smallest gestures and subtlest emotions.

Individually, these various theatrical devices are nothing new, but collectively, under the guiding hand of director Ivo Van Hove and video artist Tal Yarden, and coupled with superb performances from the ensemble of 14, they combine to truly startling effect. The end result is a work which keenly explores both political machinations and personal drama, and which remains almost always riveting despite its extended duration.

As Volumnia, Coriolanus’ mother, Frieda Pittoors magnificently embodies maternal pride and rage; equally impressive are Janni Goslinga as Calpurnia and Helene Devos as Portia in a beautifully intercut scene in Julius Caesar where Caesar and Brutus’ wives confront their husbands with their all-too-human fears. Hans Kesting’s performance of Mark Antony’s ‘So are they all, all honourable men’ speech in Act III, Scene ii of Julius Caesar is magnificent, and well-deserving of the round of applause which followed it; and as Cleopatra, Chris Nietvelt’s anguished screams after Mark Antony’s death in Antony and Cleopatra are among the purest, most harrowing evocations of grief this writer has ever seen staged.

The score, played live, is sometimes atonal and abstract, at other moments thunderous and confronting, but never predictable in the safe, cinematic way one might have expected from a production that clearly takes some of its cues from contemporary televisual drama.

In short, Roman Tragedies is a theatrical triumph, and more than deserving of the standing ovation and multiple curtain calls it received on opening night. Without doubt, one of the very best productions of the year.