This is a massive project and offers a massive rethink in the narratives we construct and hold around contemporary Pacific practice.
Gina Fairley 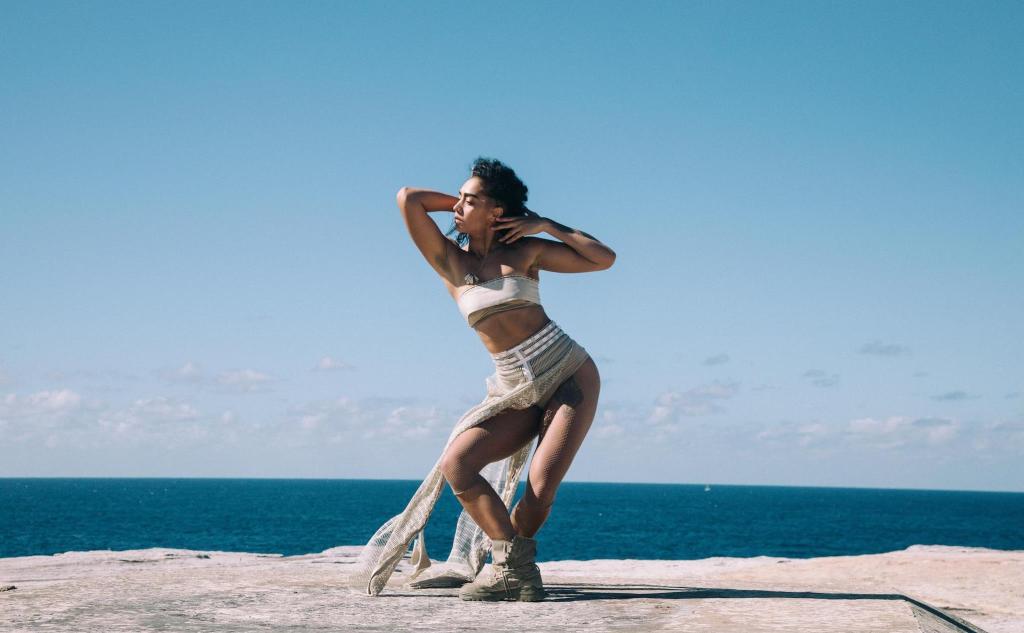 Amrita Hepi, A Body of Work (At The End Of The Earth) (Waangenga Blanco), 2017. Part of Wansolwara: One Salt Water at UNSW Galleries, 2020. Photo: Zan Wimberley.

This is a dense show – and rightly so. It is the largest exhibition of contemporary Pacific and Oceanic art to have been presented in Australia, outside Queensland Art Gallery’s iconic Asia Pacific Triennial.

It begs the question why has it taken so long? Especially given that many of these are artists are largely living and working on our shores. One reason is that perhaps that the Western world is reticient to shift its understandings of cultures of the Great Ocean beyond exoticised glossy tourism and colonial anchors that allow little space for acknowledging cultural contemporaneity.

Wansolwara: One Salt Water takes as its theme the Great Ocean, a briny connector that sits outside Western notions of boarders and territories, and rather uses the Pacific Rim to chart touchpoints.

To be clear Wansolwara: One Salt Water is made up of a suite of individual exhibitions: the group exhibition O le ua na fua mai Manu’a curated by Léuli Eshraghi for UNSW Galleries, along with the solo exhibition, Beta, ek story bathao (Child, tell me a story) by Shivanjani Lal, and two large-scale Tongan ngatu (painted back cloth tapestry) created by Ruha Fifita in a separate space.

At 4A Centre for Contemporary Asian Art (4A), the exhibition continues the conversation with works by Paula Schaafhausen, Terry Faleono, Rebecca Ann Hobbs and Vaimila Urale, curated by 4A Director Mikala Tai.

What all these exhibitions pit is striding that line between similarity and difference. It is far from static. The exhibition itself, connecting across the sea of the city between locations, metaphorically plays out that thesis, and has been expanded through a series of performances, talks and a writing program to help turn that “knowledge dearth” and outdated perceptions around.

While the exhibition has opened ahead of NIRIN, to feature at the 2020 Biennale of Sydney with its focus on global First Nations artists, the timing is clearly intended as a kind of pre-amplification paving the way with deep dive dialogue.

Curator Léuli Eshraghi – who splits his time across his homeland of Samoa, Darwin and Montreal – is interested in ‘the dynamics of language, relationality, borders and communications in this age of climate transformation’.

Located in the downstairs galleries of UNSW, O le ua na fua mai Manu’a is predominantly a video show, what Eshraghi has described as an ‘archipelago of Indigenous moving works’.

Video hung in this close proximity can be difficult to digest; one’s eye often being pulled towards action to the side. The counter view is that it also allows the viewer to draw threads across works.

Walking into the space it feels a little disjointed, but the second gallery falls into sync with video works that use bodily gesture to empower or return agency.

They sit alongside a video work by Yirrkala artist Gutinarra Yunupinu, who performs the ten signs from the Yolnu Sign Language; and in another room, the single channel video With my life as a tunnel 2018 by Shannon Te Ao, which again takes gesture as its cue for communication.

A screen floats in the darkened space – on it the intimate depiction of two Maori men offering expressions of care, melancholy and loss. The pair are tight in the frame, almost abstracted, and captures a vulnerability. It is accompanied by the pair singing Dinah Washington’s This Bitter Earth, moving between English and Maori.

The highlight in Eshraghi’s curated section, however, is Angela Tiatia’s discrete video Dark Light 2017. He says: ‘Clothed in the malu tattoo, though perceived as naked by Western mores, the artist engages with Samoan and neighbouring Indigenous people’s ways of being and knowing in these continuing capitalist times.’

Tiatia is at one with her land, turning and looking directly out at the viewer with an emphatic embrace of her culture. Above her a chandelier stands in for Imperial power and missionary zeal over this land.

The video plays out the stereotypical binaries of light/dark, good/evil, exotic/civilized. Eshraghi adds that by ceasing agency and her spiritual and territorial connection to place,  Tiatia embodies the ‘ensuing threat to the status quo’ what he describes as an ‘Indigenous renaissance when coupled with the restoration of Indigenous sovereignty and ecological balance’.

It is a very powerful and eloquent work.

Upstairs, and clearly sitting in aesthetic contrast, are Ruha Fifita’s two powerful ngatu. Compared to the energy of the video works – many of which embraced the subject of dance – these works sit in contemplative silence; their inclusion clearly an anchor in this sea of narratives.

Foremost, they speak to the critical role of fibre arts in pacific culture, from ceremony to community life, as well as inter-generational learning.

The large floorpiece Koe Ngoue Manongi (The Fragrent Garden) 2019 was created in collaboration with Fifita’s community, while a second work, Lototo 2016, seemingly flows from the wall like the ocean itself.

It takes a Tongan word for its title suggesting values of humanity and generosity, and speaks to our relationship and interaction with the natural environment. Fifita adds a quote by Shoghi Effendi, almost as a third work: ‘Man is organic with the world. His inner life moulds the environment and is itself also deeply affected by it. The one acts upon the other and every abiding change in the life of man is the result of these mutual reactions.’

It was a timely choice by Fifita, as this exhibition sits against newsreels of drought, bushfires, warming oceans and floods.

Also upstairs is a focused look at the work of 2019 NSW Visual Arts Fellowship winner, Shivanjani Lal, who explores the intersection of trading routes and histories of migration and indentured labour trade (Girmitiya) through new photography and video works.

Her installation Yaad Karo (1879-1920) 2019 overlays maps with hand-stitched those routes, linking Lal’s own Fijian Indian heritage with this forced diaspora. The maps journey around the gallery at eye level in an ordered line.


Similarly, in the 3-panel work 4 Lines Across a Horizon 2019, Lal hand-stitches in red thread – metaphorically pointing to bloodlines – four lines that represent the migration of each generation of her family. It is a narrative of intergenerational trauma and loss.

It connects with her performed single-channel video, (I am not here) (Fiji) 2017, where the artist erases the locations that inform her identity – her birthplace Fiji and her ancestral place of origin India.

The semantics in this suite of works are so tight, clean, and yet there is incredible poetry in their delivery. It is a highlight of the Wansolwara project.

Across town at 4A, a further highlight of the project is the pairing of works in the upper gallery by Samoan artist Paula Schaafhausen and Vaimaila Urale.

Lined up almost with souvenir repetition, Schaafhausen presents a suite of Tagaloa figures (Polynesian god of the ocean) created from coconut oil and debris collected from Sydney beaches.

During the exhibition period they have slowly melted away, alluding to the erosion of culture if not practiced within diaspora communities. Ebbing Tagaloa is a truly fantastic work and delivers at every level.

Across the room, Vaimaila Urale presented a contemporary iteration of tapa (barkcloth) and tatau (tattoo) with her sand-based wall mural. She riffs off traditional fa’avae tuli and tusi lili’I Samoan symbols and their likeness to the backslash, forward slash and angle bracket keyboard symbols – both forms of communication.

Tai writes: ‘Through the redeployment of these symbols Urale illustrates the development of artforms across time and technology where contemporary advancement is, perhaps, not innovation but rather evidence of the evolution of continuing artistic practices.’

On opening night, Sydney based performance artist Terry Faleono, a long-time collaborator of Urale, responded to her work with his performance Sand (2020).

They offer a fabulous connection to Ruha Fifita work at UNSW Galleries, that takes its cue from traditional culture to deliver a contemporary environmental message.

Completing Wansolwara: One Salt Water is a performative video by Rebecca Ann Hobbs in the downstairs gallery of 4A with a suite of videos from her series South (2010-2011).

This is a massive project and offers a massive rethink in the narratives we construct and hold around contemporary Pacific practice. It is clearly a taking back of agency, and offers a recalibration that we need to take on board.