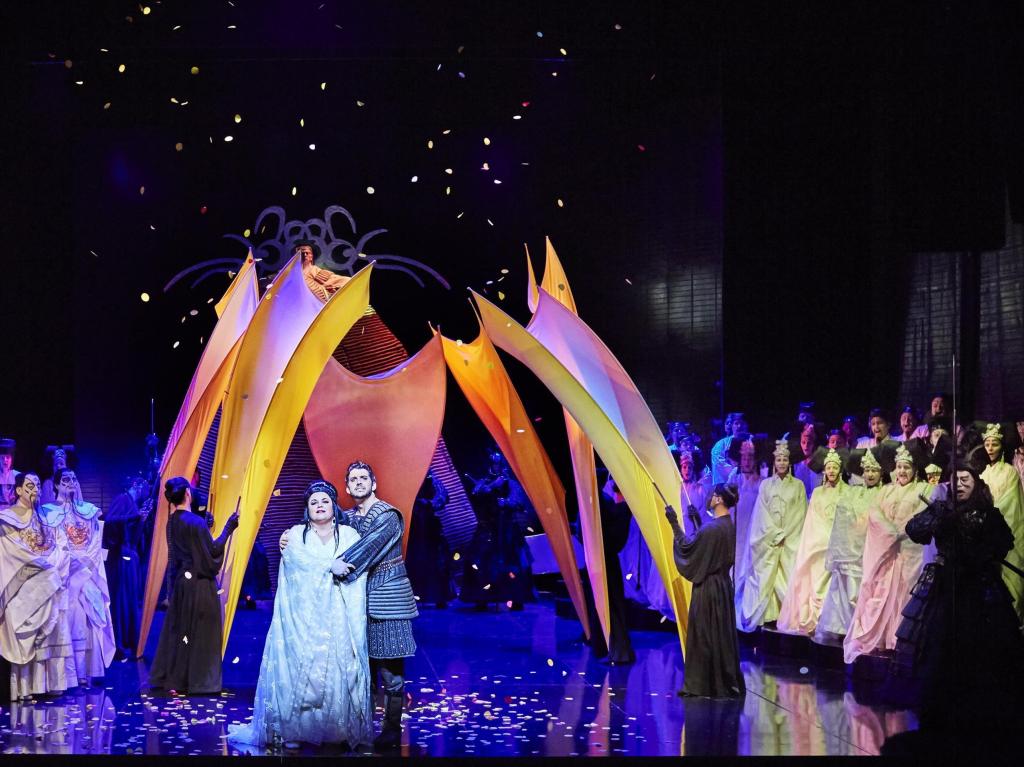 Richard Strauss changed the genre of opera forever at the turn of the last century with the introduction of his possibly insane and decadent seductress Salome (1905) and vengefully unhinged Elektra in 1909. In addition to finding a new and exotic musical language from that which had served for centuries beforehand, he revolutionised the role of women as now liberated from being vessel or victim of male dominion. Heroines and anti-heroines thereafter were allowed to become independent, unique beings solely capable of confidently determining their own destinies, indeed be they perversely deranged, in context with their bemused male counterparts. This reached its apotheosis in Alban Berg’s Lulu (1929-35). Pre-empted by Tosca (1900) who overcomes male tyranny with murder and ultimate suicide, Puccini supremely accomplishes this in his posthumous and deeply flawed masterpiece, Turandot.

Yet, as opposed to his well-established verismo tradition, the work is based on a mythical Princess in Peking (though originally a Russian deity residing in the Persian Empire). Princess Turandot (there is traditional argument regarding whether the last ‘t’ is pronounced) lives in regal, luxurious and sumptuous isolation and is used to total dominion over her subjects for fear of casually executed death. Forever she mourns, revisiting the memory of an ancestress whom, she explains in her opening aria a third the way through the opera, ‘Reigned in silence and joy, resisting the harsh domination of men.’

Graeme Murphy’s lavish production is nearly three decades old yet still makes a commanding impact. It remains precisely what one might expect from Australia’s finest living choreographer. With more colour and movement than a Bollywood film there is hardly a moment of stillness from beginning until end. With large chorus, ensembles, principals, dancers and extras, including sword-wielding, buff and oiled executioners, it makes for a very cluttered stage in the Joan Sutherland Theatre. Sets and costumes (by the late Kristian Fredrikson) are magnificent with complex, deeply evocative and subtle lighting by John Drummond Montgomery. I admired the layers of moons and gongs aloft and centred but particularly the impassive stone/metal face behind which Turandot resides in her world beyond and apart.

Amber Wagner is an outstanding Turandot. She is a knockout as the ice Princess with a disturbing penchant for cruelty and an utterly unforgiving heart. Her excellent Sieglinde in the Melbourne Ring Cycle in 2016 is still memorable. Here is a dramatic soprano par excellence with depth across her wide range, a richness of timbre, texture and volume that is able to cut through a large orchestra and chorus. I was reminded of the late and great Rita Hunter in the role. Her opening In questa reggia, surely one of the most demanding entrances in any opera was a triumph both musically and dramatically even sung as it was on a moving wheeled dais, a nightmare for any singer. Swathed in white, the traditional colour of death, and after her bitter interrogation of Calàf, she must untie herself from an interior harness and emerge from her cocoon-like outer garment stepping on the backs of prostrate extras to reach the surface of the stage. This was all profoundly unstable and nerve-wracking to witness to say the least, the hazard of potential injury didn’t add in any way to the opera.

Puccini’s writing ends in Act III with the music that follows Liù’s suicide, cortège and Timur’s departure. All that follows is not a patch on the rest of the opera. Puccini left sketches and this ending by Alfano is very closely based on these pages but I am bold to suggest that Puccini was both unable to complete the opera as he was unhappy with the text despite revisions and indeed his own setting of it. Exhausted from chronic ill-health, what he had in mind from telling notes on the final pages was a great Tristan-like Wagnerian resolution in the form of a duet between the main protagonists, possibly ending in the death of one or both. Instead, what we have is a glib happy ending with the lovers in this production united and smiling under full spots and a canopy of golden confetti. Turandot’s change of heart after Calàf’s kiss is unbelievable and Calàf’s character remains underdeveloped to support it. We are left with Liù as the most developed character in the opera, her tragic death swept away as if it was nothing. This is precisely why Arturo Toscanini ended the opera at the first performance with a slow curtain and announcement to the audience that this was all the composer wrote and that this therefore was all he was prepared to conduct. It reminds me of the Lacrimosa in Mozart’s Requiem when the composer’s music stops and everything else that follows seems a cardboard cut-out.  Luciano Berio wrote an another ending to Turandot that would be interesting to hear.

The opera relies on two “thunderbolt” (love at first sight) moments when Calàf falls in love with Turandot (Act I) and Turandot has a profound change of heart after Calàf kisses her (Act III). As hard as I tried to believe in all of this once again, both are completely unconvincing, the latter causing titters of laughter from the audience.

Basque tenor Andeka Gorrotxategi is outstanding in his debut as Calàf though his voice was ill-matched to Amber Wagner’s.  Nonetheless, his Nesun dorma in Act III was powerfully conveyed. Richard Anderson’s grave and gracious Timur carried all the nobility of the deposed great King of Tartary, his bass voice having the smoothness and resonance of burnished wood. Only his final notes after the suicide of his beloved and faithful Liù were difficult to project such was his affecting emotional intensity. Mariana Hong’s Liù was superbly acted overbrimming with pathos though her voice could sometimes have been more focussed. The commedia dell’arte trio of Pong, Pang and Ping capable of frivolity, playfulness as well as ghastly brutality were expertly performed by John Longmuir, Virgilio Marino and Christopher Hillier. Exceptionally directed (Kim Walker, revival director), the trio performed as one in ensemble. Their cream printed fabric and black-bamboo screens in Act II, against gold, suspended dragon and fish motif screens, converted alternatively into hammocks and swings Ho una casa nell’Honan (I have a house in Honan) drawing genuine delight from the audience. Both of Andrew Moran’s appearances as the public-speaking Mandarin were effective despite being conveyed on yet another unstable wheeled dais. Graeme Macfarlane as the Emperor Altoum, appearing on what looked like a giant Issey Miyake gold mountain representing his throne, at first struggled by distance from the orchestra with his pentatonic tuning. Uncertainty continued, his voice weak and wavering on opening night.

It has been commented that the composer’s last score in the genre is his most advanced. Certainly its size of forces is unprecedented, as is Puccini’s harmonic language that encompasses polytonality (more than one harmonic centre at once) and modalism particularly in his Chinese pentatonic melodic writing. But the work also moves into an Impressionistic sound world by use of evocative solo winds, a large percussion section including a giant tam-tam onstage and 13 de-tuned Chinese gongs in the pit. The Opera Australia Orchestra gave a fine interpretation of the work on opening night despite their cramped circumstance and the resultant ungenerous acoustic of Joan Sutherland Theatre, though recently improved. There was detail in the orchestral score that I simply could not hear in the theatre. Nonetheless, Christian Badea returning to conduct the work is to be commended for providing a sure hand in shaping its often-equivocal phrasing as well as a rich palate of colour and subtle shading with constant attention to detail to the large onstage chorus, sizable orchestra including offstage brass and soloists.

The Opera Australia Children’s Chorus supplemented by the excellent Gondwana Choirs charmed in both of their appearances.

Don’t miss this one.