A Perth Festival Commission with Paul Kelly and James Ledger creates a soundscape at times intimate and fragile, at others frenetic, haunting and soaring, through uncanny combinations.
Gina Fairley 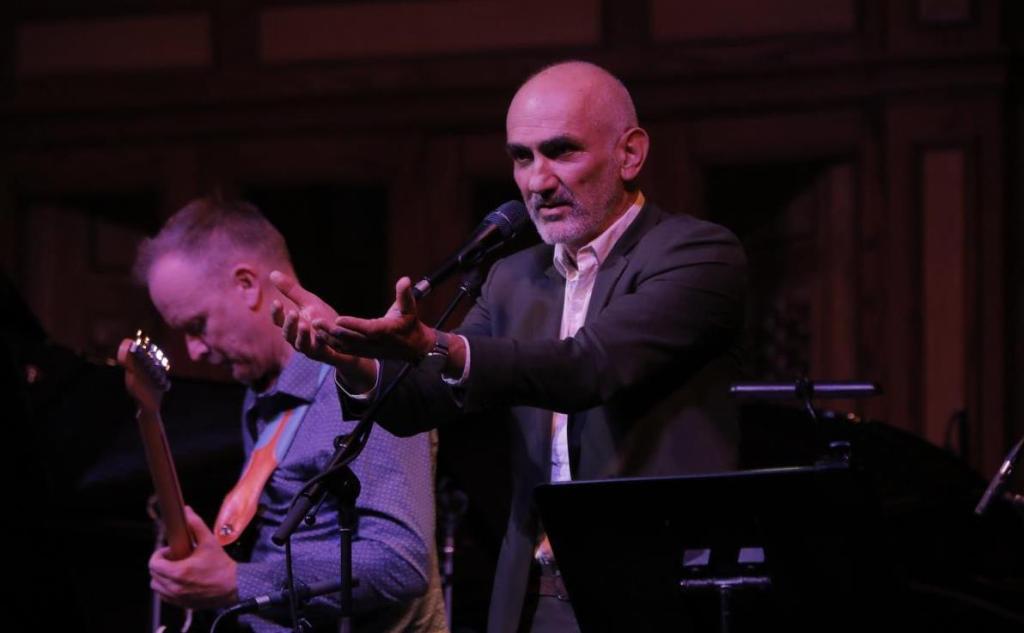 There is something quintessentially Australian about growing up with birdcalls – from waking up to maggies and currawongs, to congregating cockies squawking like a pack of raucous teenagers, and the sounds of a bellbird mingling with the pungent smells of the bush.

It is not surprising then, that one of Australia’s most celebrated storyteller musicians, Paul Kelly, has turned to birds for a new work commissioned by Perth Festival.

Thirteen Ways to Look at Birds has been created and performed by Kelly, with co-composer James Ledger, percussionist and vocalist Alice Keath, and Anna Goldsworthy, Helen Ayres and Tim Nankervis of the classical chamber group, Seraphim Trio.

Together these artists have created a soundscape that is at times intimate and fragile, and others frenetic, haunting and soaring. Bringing together folk and chamber music, and an unlikely pairing of the banjo with pizzicato strings, synthesizer with cello, and bass guitar with glockenspiel, this suite of compositions strike a balance between disparate genres and something in harmony that it feels totally natural.

They are not attempts to mimic or replicate their individual songs, but rather come from a very intuitive and improvised collaborative approach that is evocative of a lived experience of birds. It is an incredibly rich place that finds parallels in expressions of the human condition – love, freedom, migration, trauma and loss. The punctuation and pause of poetry works so well with song.

While this piece has been in development for a number of years – the first production workshop was held mid-2018 – and had a partial release last year with an album of the same title, it was presented this past weekend in a one-off performance at Perth Concert Hall (15 February) for the Festival.

Poetry and chamber music are not what we might embrace as the most democratic of mediums, but in the hands of this dynamic group of performers that is exactly the intention aimed for. And if opening night was anything to go by, then it’s been an overwhelming success.

It was pianist Anna Goldsworthy who came to Kelly and Ledger with the idea. While Kelly admits he is not comfortably a ‘nature man’, poetry has been a regular companion since his early 20s. It was a poem by Keats, Ode to a Nightingale, which Kelly describes in his music more as an ode to death.

Performed with haunting green light, Kelly uses poetry’s phrasing and intonation and his own bodily gesture to deliver these pieces – appearing at times almost birdlike himself with hands outstretched or shoulders clenched. ‘Was it a vision or a waking dream?’ he channels Keats.

The thing about Kelly – and why he is so loved – is his distinctive Australian voice, which is so fitting for this space that hovers been storytelling, reading and performance.

There is incredible range across these thirteen pieces that move between a joy and lightness, with Denis Glover’s Magpies where Kelly turns to his guitar beaming, to the dark strains of WB Yeats’ Leda and the Swan, which Kelly describes as ‘a story of rape in just 14 lines.’

‘By the dark webs, her nape caught in his bill, He holds her helpless breast upon his breast.’

The pieces starts dreamy and languid as the beautiful swan drifts, Helen Ayres on violin teetering and tantilising, the bass drum building with Keath’s unique voice chilling and persistent. She describes that in the development of this piece Kelly sent her a recording and asked: ‘Can you sing all over this and email it back to me?’

Another swan narrative is Black Swan, delivered as one of three instrumental pieces in the suite. It is an unlikely duet between the cello, with its slow resonant chords, and a mosquito-like intensity of the electric guitar, evoking a feeling of majestic, muscley power, gliding over the audience.

A highlight of the performance was Ayres’ incredible violin solo Mudlarking. Let me say it again – incredible!

In contrast, Thornbill – taking is inspiration from a poem by Judith Wright – is a great example of that sense of passion to experiment across mediums, to collaborate and challenge the boundaries and status quo of genres, and to encourage a holistic embrace of the arts.

A strong focus of this year’s Perth Festival under new director Iain Grandage has been to rebrand the event by removing the ‘international’ flag, and anchoring the overriding narrative back to the local and Indigenous stories.

The black swan is WA’s emblem; Ledger is based in Perth, and lectures at the Conservatorium of Music at the University of Western Australia; and Australian poet and environmentalist Judith Wright’s poem Black Cockatoos, also performed here, has a great resonance to the strong environmental zeitgeist currently sweeping our nation.

Wright wrote a book of bird poems in 1962 while last year Kelly published his own curated book of poems, Love is Strong as Death. The passion to connect poetry and music started, however, in 2012 – and I suspect that is one of the reasons this performance is so resolute and comfortable in pushing the intersection of mediums.

Kelly first bought chamber music and poetry together in 2012 in another project with Ledger, Conversations with Ghosts, and then again in a collaboration with Keath on an album of Shakespeare’s sonnets. It was not only combining the mediums that was a breakthrough moment for Kelly, but it was the first time he started working with words first, then composed out of that.

Thirteen Ways to Look at Birds pushes that to a new high, a new art form that sits somewhere between singular, usual languages, and one that I feel will have a great impact moving forward. This will become one of Kelly’s iconic works.

I am left with Emily Dickinson’s words: ‘Hope is the thing with feathers – That perches in the soul.’

A Perth Festival Commission, the performance will now tour Australia.

The writer travelled to Perth as a guest of the festival.