Alana Valentine's tale of Sydney's class struggle on stage at Belvoir St Theatre.
Sophie Gillfeather-Spetere
[This is archived content and may not display in the originally intended format.] 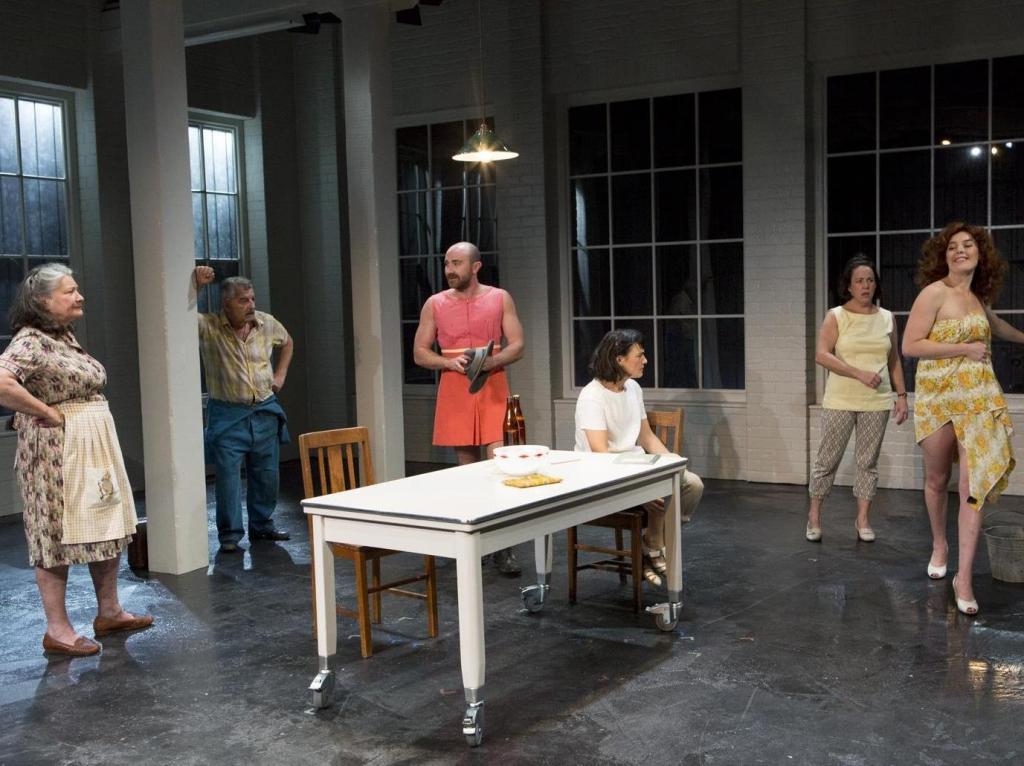 Narelle walks into a former factory conversion apartment in Pyrmont. She has a plummy accent, the chic of the academic middle class and a hovering sense of loss. The real estate agent is keen to get her out, but Narelle has plans to linger.

She grew up around this sugar refinery. Her grandfather, Sidney (Lex Marinos), worked the factory floor. It was the 1960s and Pyrmont was a slum. This is the era of The Sugar House, back when the formidable nanna June (Kris McQuade) headed up the McCreadie family.

June’s story is an old one — blood; the way it passes through you and carries on. June’s filled with a dark fear about the ‘bad blood’ that’s within her and her kin.

The bad blood is the inheritance of poverty, the way it makes you vulnerable to a system that sees you as disposable. That’s why June is an activist, stoically campaigning for the abolition of the death penalty after the last man sentenced to execution in Australia is hanged from a gallows on a morning in 1967.

For June, Ronald Ryan’s state-sanctioned death is a symbol for all the systemic injustices and corruption churning through the bodies of Australia’s young, poor and ignorant men. Her son Ollie (Josh McConville), a sly but loveable scallywag, is just another piece of meat for Sydney’s cops to butcher. This makes her angry and also fiercely protective.

June sees the world as rigged for injustice. She expects it for her daughter, Margo (Sacha Horler). Wants to save her son from the worst of it. And chips tirelessly away so her granddaughter, Narelle, might just escape it. But what tension lies in the heart of those that succeed?

The grandchildren of Sydney’s factory workers benefited from years of free university. Suddenly, lawyers, doctors and politicians sprung from the bad blood of the dockside as readily as they did the bloodlines of the Dover Heights tennis set. As they ascended, the factories were stripped and gutted. Now they were covetable; the courage and oppression of those that worked inside them repackaged as heritage hip. The stories of mould and violence are branded as character and backstory for a class of people who have long disconnected from the realities of Australia’s poor.

June scolds a 20-something Narelle for her pig-headedness, it’s a hiding for her ignorance as much as it is her privilege. She’s barely out of university and she already feels so secure in her middle-class milieu. But it’s just a ‘thin topsoil’ over a past that’s been sweated and bleed out by generations; one foul step and you’re back in the mill.

The Sugar House is emotional without being sentimental. It’s soulfully acted within Michael Hankin’s stripped-back set. McQuade’s matriarch is the kind of tormented, tough as nails, glue-of-a-woman whose parallel can be found within many families. Horler’s Margo delivers some of the strongest scenes as she burns with the kind of rage only found in those who always feel they are playing second string.

Harbridge playing all three ages of Narelle is skilfull. From the bright ‘pup’ of the family to the sometimes woefully earnest anarchist law student, to the 40-something lawyer about to purchase back a slice of her own history, Narelle embodies Australia’s fast-tracked middle class. She’s buying what’s on sale, but desperately seeking something more.