Review: The Carbo Trio at The Independent

A most exciting concert combining guitar and voice.
Lynne Lancaster
[This is archived content and may not display in the originally intended format.] 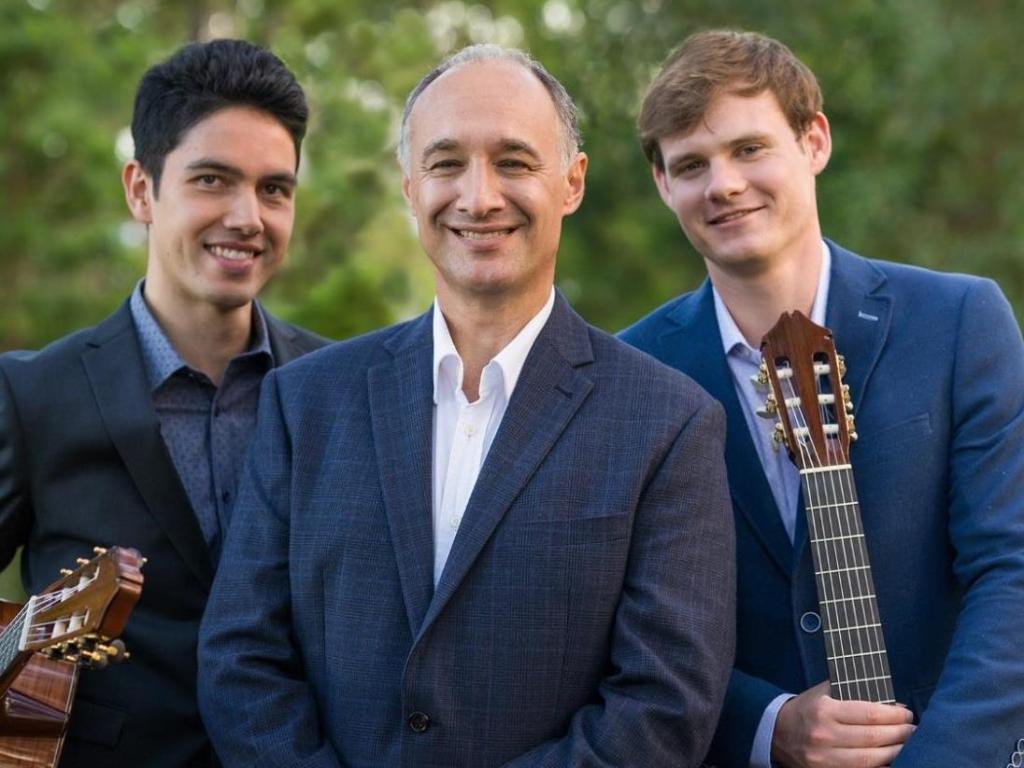 The latest in the Prelude in Tea series at the Independent was a delightful concert presented by the Jose Carbo Trio. The Trio blended music inspired by Spain, opera, lieder and classical guitar among other things, and features music by Schubert, Faure, Debussy, Verdi and more. This concert was arranged by the Trio allowing for the dramatic and original musical setting of beautiful voice and two guitars.

José Carbó has sung with some of world’s most prestigious opera companies, including Milan’s La Scala and the New York Metropolitan Opera. He also performs regularly as a principal artist with Opera Australia (Germont in La Traviata and Alfio/Tonio in Cavalleria Rusticana/Pagliacci). In this concert Carbó gave a thrilling, charismatic performance and was in fine voice.

For this concert Carbo has joined forces with two stars of the classical guitar: Andrew Blanch and Ariel Nurhadi. The trio first appeared together on stage at Canberra’s 2015 Voices in the Forest concert, where they performed music from Carbo’s ARIA-nominated album My Latin Heart. There was great rapport between the trio and some dazzling guitar playing.

Carbo explained that the use of a microphone was due to the technical requirements inherent in using the guitars which were relatively quiet in accompaniment. He also elucidated that the reason there were many breaks between songs was because retuning of the guitars was necessary to perfectly match his voice throughout the program.

The first half of the concert began with a brisk yet passionate performance of Gluck’s O del mio dolce ardour, followed by a lilting waltz-like Il Poveretto by Verdi.

We then jumped to Spain for a Flamenco style guitar duet Intermezzo by Granados, at first slow and stately then getting breathlessly faster and faster in a stirring dialogue for the two interweaving guitars.

In contrast, Madlem’s Monte Carlo, a guitar duet with its bright jazzy feel was very different in mood and a great audience pleaser.

Next we heard two pieces by Schubert – Der Neugierige, very moving and passionate and the powerful, dramatic Erlkonig, one of the major highlights of the concert with its emphatic opening on strings and the frantic sound of the galloping horse ridden by the father seeking to escape the elf king.

For most of the second half we were in Spain with music by Falla.

We first heard a swirling fiery Spanish Dance No 1. from La Vida Breve with catchy Flamenco rhythms and then a set of seven short Spanish Popular Songs ( Siete Canciones Poulares Espanolas) some brisk and bubbly, some with shimmering flowing guitars, some wistful and dreamy others brisk and emphatic.

Houghton’s Lament and Alchemy followed, Lament being a rippling melancholy guitar duet while Alchemy was very fast and dynamic, darting, pulsating and with shimmering, gliding strings.

Hahn’s L’Heure Exquise was given a seductive, entrancing performance by Carbo with flowing guitar and Tosti’s Idealewas heartfelt and prayerlike. To conclude the concert was the powerful, dramatic and chillingly gripping Cortigani vil Razza dannatta (from Verdi’s Rigoletto).

Tumultuous applause and screams of Bravi led to an encore a repeat of the lyrical romantic L’Heure Exquise.