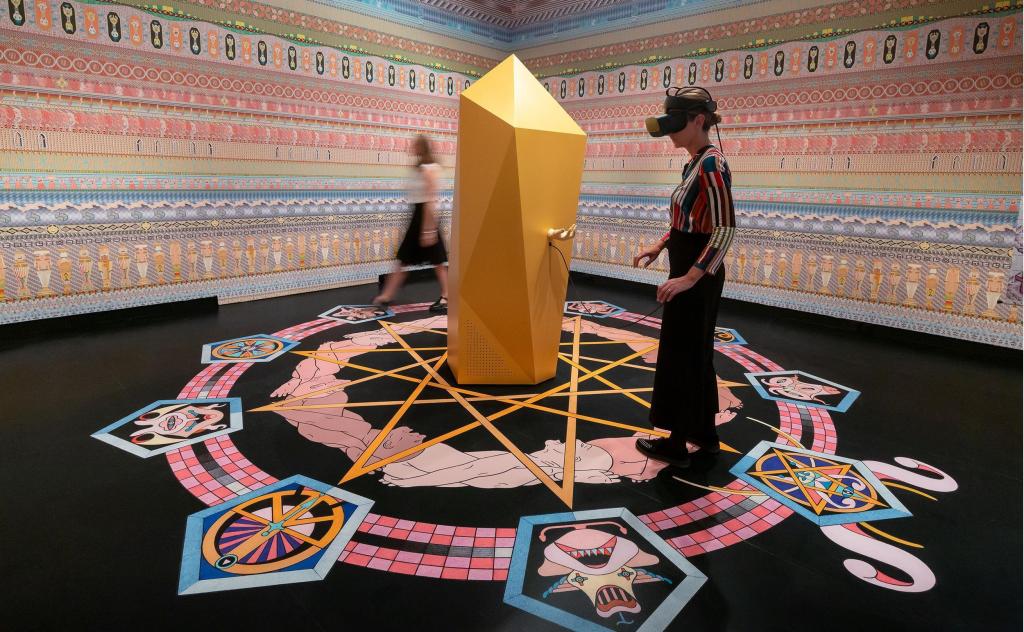 The title of the current exhibition showing at Heide Museum of Modern Art is an apt one as Terminus alludes to a finishing point or the attaining of a final goal. This notion of a quest, popularized by researcher of comparative mythologies Joseph Campbell and his idea of the hero’s journey, is individual in practice but universal in nature. For Campbell, it was here that the artist plays a vital role by capturing the potency of the human experience through the act of creating.

The centrepiece of the show is five new virtual reality artworks experienced through Oculus Rift headsets which take the wearer on a fantastical VR journey. The concept is a result of a creative collaboration between New York-based New Zealand-born artist Jess Johnson and New Zealand filmmaker Simon Ward; the works inspired by the pair’s early interest in arcade video games, 1980s and 1990s comic books, horror movies and science fiction. Using Johnson’s two-dimensional, highly intricate geometric artworks in fibre-tipped pens and gouache as the basis for the virtual worlds, the artists have reimagined and developed the originals with Ward transforming the analogue into digital.

The quest entails five different experiences that can be viewed in a narrative fashion or as stand-alone art pieces: there is Fleshold Crossing and Known Unknown, Scumm Engine and the tower of Gog & Magog and finally Tumblewych (2018) where you will be confronted by the ultimate sensory experience and perhaps the mysteries you seek will be realised. Enriched with input from developer Kenny Smith and sound composer Andrew Clarke, the terminus universe is a mysterious one with cryptic symbols, humanoid clones and Escher-like architectural mazes; at times this world comes rushing towards you and then before you know it the floor on which you stand drops underneath your feet.

Commissioned by the National Gallery of Australia (NGA) in 2018 and funded by the Balnaves Foundation, this VR work will tour to five venues between 2019 and 2021.

Heide presents Terminus alongside its own exclusive exhibition of drawings and textile works by Jess Johnson. Counterbalancing the technology-driven centrepiece is a quilting collaboration between Johnson and her mother Cynthia, a quilt artist, in which Johnson’s patterned, repetitive designs have been digitally printed onto cloth and embellished through thread by her mother. Meticulously beaded gowns from the Mysteria Wisteria collection (2016) reinterpret Johnston’s geometric designs into fabric as wearable clothing; a collaborative project with fashion house Romance Was Born.

The notion of a ‘space’ is an important consideration in this exhibition. The virtual space creates its own kind of performance in which the wearer of the headset may look from side to side, up and down, and turn 360 degrees; the viewer in their own three-dimensional space may even reach out to touch something that only they can see. Although video, installation and performance art have all explored the notion of space, the VR headsets take away the immediate group experience, making it something more solitary. To connect the personal to the community experience of a gallery space, the museum’s two large parallel rooms and adjoining smaller spaces, echoes the virtual environment with patterned floors and walls and minimal props.

Another important consideration of space is how it affects the visitor experience. The Museum of Modern Art at Heide has been mindfully designed to be accessible for people with a range of abilities to navigate, from wheelchair ramp to a flat open-floor plan and public amenities close at hand. Didactic and text panels inform and provide context for the works on show, although the white text on grey background may be problematic for people who require greater visual contrast. Helpful staff are also on hand to advise how best to navigate the spaces. It is also worth noting that weekends are busy and queues for the headsets can be long, so be prepared to wait.