Willy Russell’s play, Shirley Valentine, was written just over 30 years ago. Now, in this marvelous production the play feels as fresh as if it was hot off the press.
Lynne Lancaster
[This is archived content and may not display in the originally intended format.] 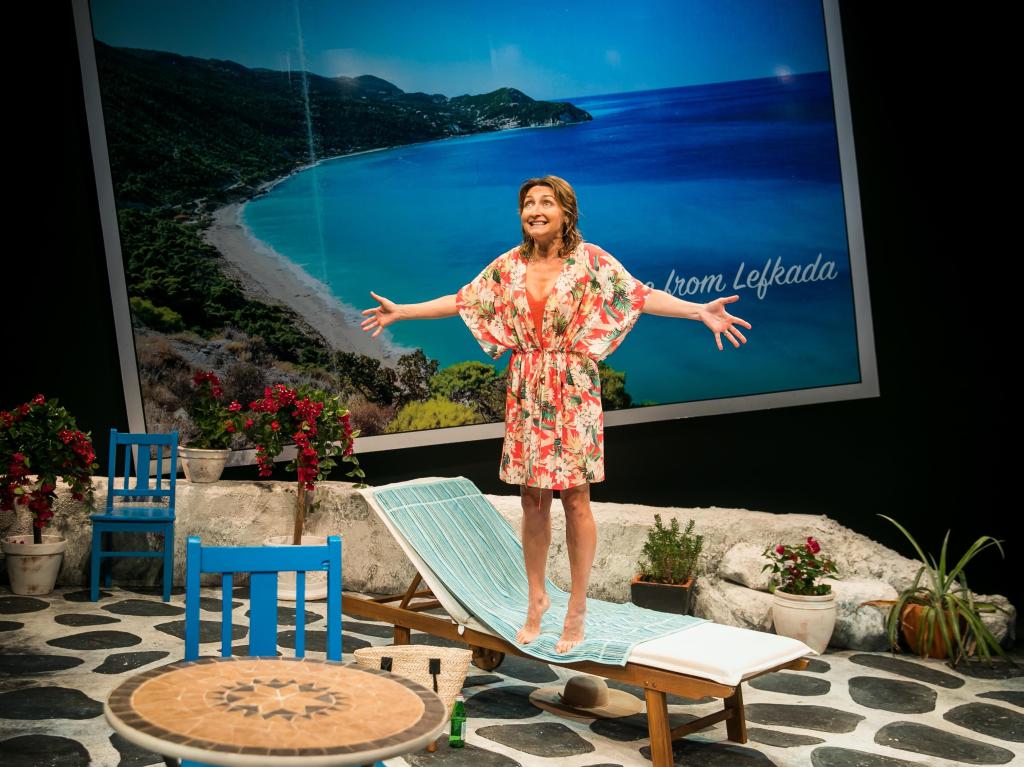 The challenges Shirley faces in this play remain today. Shirley is suffering from an eroded self-esteem after decades of being trapped in a now loveless marriage to her coldly distant, rather arrogant and controlling husband.

At 40-something the Liverpudlian housewife feels her life has no real meaning any more. She is lonely and talks to the wall. She feels bored and trapped, in a rut – her husband demanding everything just so and exactly on time. He wonders where the young, more vibrant Shirley has vanished to. (But she is there – still trying to stir things up.)

Shirley suddenly gets a taste of a different life when a gal pal takes her on a holiday to the Greek Islands. Can Shirley break free of the imposed shackles on her life? What if she doesn’t return to the UK?

The play opens with Shirley in the kitchen cooking ‘chips and egg’ for her husband Joe – who’s expecting steak instead.

Shirley eventually flies to Greece without telling her husband first and begins the big adventure of rediscovering her real self, even after her best pal deserts her for the first few days of the holiday.  (Shirley has unexpected adventures of her own, chasing her dreams.)

Sharon Millerchip as Shirley is luminous and enchanting, giving a stellar performance of this monologue. Shirley fights to rediscover her real self and becomes liberated from the shackles of society’s expectations, which is not easily done. Millerchip captivates the audience and has us all cheering Shirley on.

During the show we meet ten characters, all seen through Shirley’s eyes. These characters include Joe her husband; their daughter; Shirley’s friends Jane and Marjorie; a horrid headmistress from Shirley’s childhood; a bitchy acquaintance Gillian, and so on (not forgetting Kostas her Greek lover).

Such characters are lovingly and wickedly brought to life by Millerchip courtesy of Russell’s witty but thoughtful script. Millerchip glides easily from one character to the next and reveals Shirley’s increasingly claustrophobic vulnerability until Greece changes everything.

Throughout the night the play had the audience rocking with laughter, and at other times listening in intense, moving silence.

Simone Romaniuk’s set design in Act one creates the kitchen in an estate with oven fridge and the like, and a view of other repeated estate houses.  With Act two we are transported to Greece. The taverna has plants, an outdoor table, rocks – there’s one rock in particular that Shirley talks to – and a huge postcard poster of a sunbaked Greek Island (quite Mama Mia-ish).

A wonderful revival of this inspiring feminist play that celebrates being true to yourself.