Saigon captures the way in which the diaspora is obsessed with its grief and dispossessed of its past.
Jinghua Qian 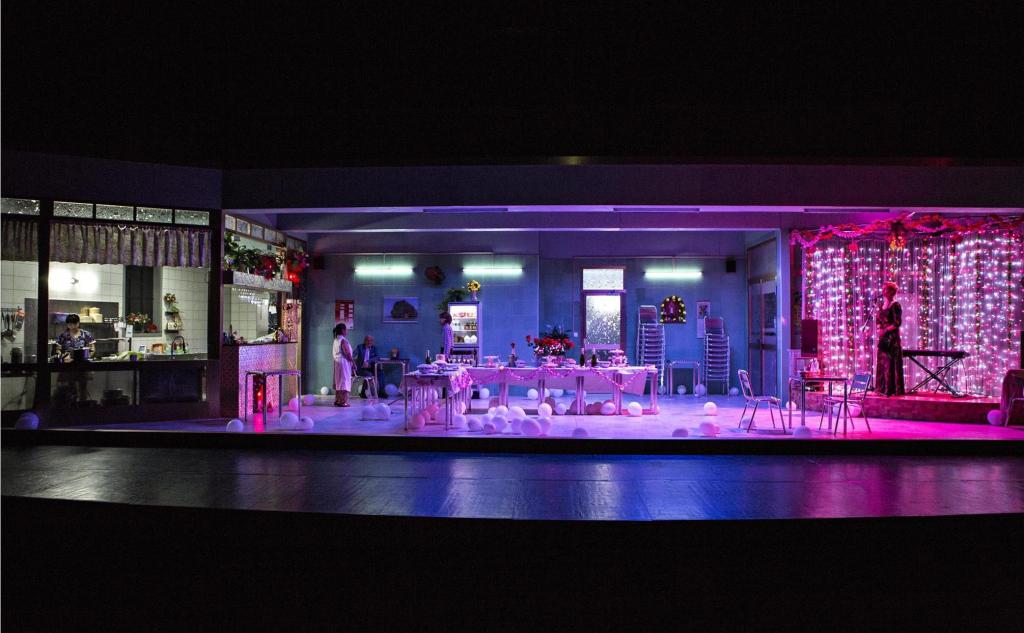 Saigon is an epic historical drama centred on two moments, 40 years apart: 1956, when the French withdrew from Vietnam, and 1996, when overseas Vietnamese started to return to their homeland after the US embargo on Vietnam was lifted. A partly devised work, the bilingual text was written by Caroline Guiela Nguyen after years of research and interviews, then finalised in collaboration with the whole artistic team. Performed in French and Vietnamese with English surtitles, Saigon appears in Australia as an Asia TOPA exclusive after successful seasons in Europe.

All the action takes place in a Vietnamese restaurant where different locations and timelines meet. Alice Duchange’s set – with its green tile walls and stackable diner chairs, a kitchen on one end and a karaoke stage on the other – has a kind of universal nostalgic familiarity that fits nicely with this ‘mosaic-like narrative about love, suffering, exile and France and Vietnam’s shared history’, as the playbill calls it. Rather than being placed in time, the set is a vessel for time to flow through, and Jérémie Papin’s naturalistic lighting supports this beautifully with well-placed, utilitarian fluorescents, a fuschia wash on the karaoke stage, and warm sunlight cascading through different windows depending on the time of day.

There’s quite an ensemble of characters. A young waitress, Lam (Huỳnh Thị Trúc Ly), is the narrator, observer and often the interpreter for other characters. The restaurateur is her aunt, a middle-aged Vietnamese woman called Marie Antoinette (Trần Nghĩa Ánh). Then there’s Linh (first played by Nguyễn Phú Hậu), a young woman who marries a French soldier, Edouard (Dan Artus). Their relationship is laden with lies, shame, and false promises. By 1996, their French-born son, Antoine/An Tuan (Pierric Plathier), has grown up into an architect who struggles to understand his mother (now Nguyễn Thị Mỹ Châu).

Another storyline follows young Hao (Lê Hoàng Sơn), a singer who has to leave Vietnam and his beloved, Mai, because he fears being persecuted as a collaborator. When he arrives in Paris, a Frenchwoman named Cecile (Adeline Guillot) draws him into her home, clinging to him for support as she fights fear, loneliness and the loss of her vision. He returns to Saigon – now Ho Chi Minh City – in 1996 as a Viet Kieu, an emigre who has become foreign to his homeland. A host of other characters pop in and out, most notably Madame Gauthier (Maud Le Grevellec) whom Marie Antoinette pursues for answers about her son, missing since the Second World War when he was recruited by the French army.

Saigon draws inspiration from the Vietnamese love for karaoke and melodrama, from the feelings of nostalgia and mourning that electrify the emigrant experience. It’s essentially a stylish soap opera, and sometimes that works very well, bringing together French and Vietnamese torch songs, some sequences of talky French comedy, and high-emotion drama. The parts of the dialogue that play with language are particularly strong, holding swathes of submerged longing: ‘Tell her I love her,’ Edouard instructs Lam as translator. ‘I don’t want to,’ she responds. Later, Linh confronts her French husband about bringing her to Paris under false pretenses. ‘I learned the subjunctive tense,’ she spits.

But despite the four-act play clocking in at more than three hours, most of the characters feel shallow. Their circumstances change, but nothing really seems to shift within; they’re too neatly defined by their various tragedies. Mai, in particular, feels like a single note of wrenching pain; she could be any woman in any country who has lost a lover to something beyond her control.

It’s delightful to see the actress (Tô Thị Thanh Thư) return in the third act as a bold, curious and impudent 90s girl in a scene where Hao, now an old man (Trần Nghĩa Hiệp), is haunted to see her, the face of his former love – yet, he does not recognise himself in the young man he once was (Lê). This moment finely captures the way in which the diaspora is obsessed with its grief and dispossessed of its past. And Linh and Edouard’s toxic romance embodies the abusive intimacy of the colonial relationship in quite a sophisticated way.

A minor quibble is that often the action is set too far back on the stage. Saigon has been compared to the film In the Mood for Love and there are certainly aesthetic similarities, but Wong Kar-wai’s cinematic style relies on close ups. There were moments here, especially in the more melodramatic confrontations, where I longed for a shot reverse shot to reel me in. Particularly if you’re relying on the English surtitles (which don’t distinguish between speakers, or between Vietnamese and French dialogue), it can be a bit challenging to take in everything that’s happening.