This young quartet demonstrate exciting unity and stunning rapport.
Gillian Wills
[This is archived content and may not display in the originally intended format.] 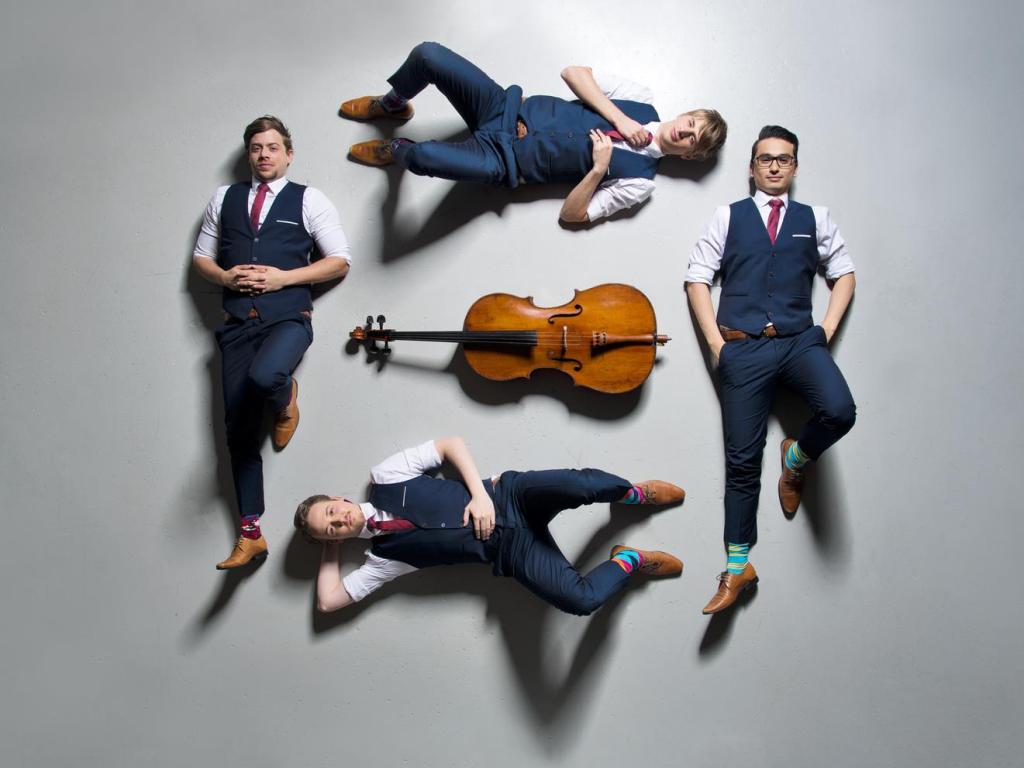 The acclaimed Orava Quartet not only have a unique sound they also sport a hipster ‘look.’ Tan lace-ups resonate with their golden-lacquered instruments. Despite the uniform of waistcoats with maroon ties and retro-patterned socks in carnival colours, the players – first violinist Daniel and cellist Karol Kowalik, Thomas Chawner on viola and David Dalseno on second violin – each has a distinct individuality. A surprising factor, that renders this young Quartet’s special unity and stunning rapport all the more exciting.

While Karol’s expression mirrors every passing emotion in the music, his brother Daniel’s face is persistently neutral. This was effective in the Quartet’s accomplished rendition of Haydn’s ‘Joke’ Quartet in E flat major, op.33, no. 2, in which Daniel dribbled a descending fragment as a surprise ‘extra’. Entirely unexpected, he garnered hoots of laughter. Similarly, the comic dismembering of the theme in the sparkling Tarantella Finale, when the listener is supposedly fooled by false endings, also generated chuckles from the crowd.

The performance excelled because of its animated and beautifully shaped phrasing, remarkable precision and impressive balances between leading and subordinate lines. The Quartet seems to have taken Debussy’s comment, ‘Music is the space between the notes’ to heart as the performance revealed a daring and appealing emphasis of rests and delayed silences which grabbed attention and illuminated Haydn’s structure.

Orava peaked in a thrilling take on Shostakovich’s String Quartet No.8 in C Minor, Op.110. The performance channeled the composer’s harrowing post-Second World War lament with a theatrical edge that gave riveting intensity to Shostakovich’s bleak landscapes. Thomas Chawnor’s ear-pleasing viola playing was highlighted to a much greater degree and his leads into various sections were lucid and temporally staggered to perfection. The savage knocking motive, the ‘rap rap rap,’ said to represent the KGB’s intimidating knock on their next victim’s door, chilled to the bone.

Orava demonstrated superb interpretative insight. It was a gut-wrenching delivery that has taken up residence in this reviewer’s memory. The standard of playing deserves five stars. Program design rates a little less, because the easy-on-the-ear Tchaikovsky String Quartet No.1 in D Major, Op.11 although beautifully elegant and controlled couldn’t match the visceral heights achieved in the Shostakovich. The latter should have come last. Repertoire that gives greater prominence to Chawnor and Dalseno would add value too. Perhaps, The Kronos Quartet’s repertoire and other progressive champions of the genre could provide some clues.