New Balance is a tender, insightful and intelligent look at the collective experiences of what it is to be queer.
Sabine Brix 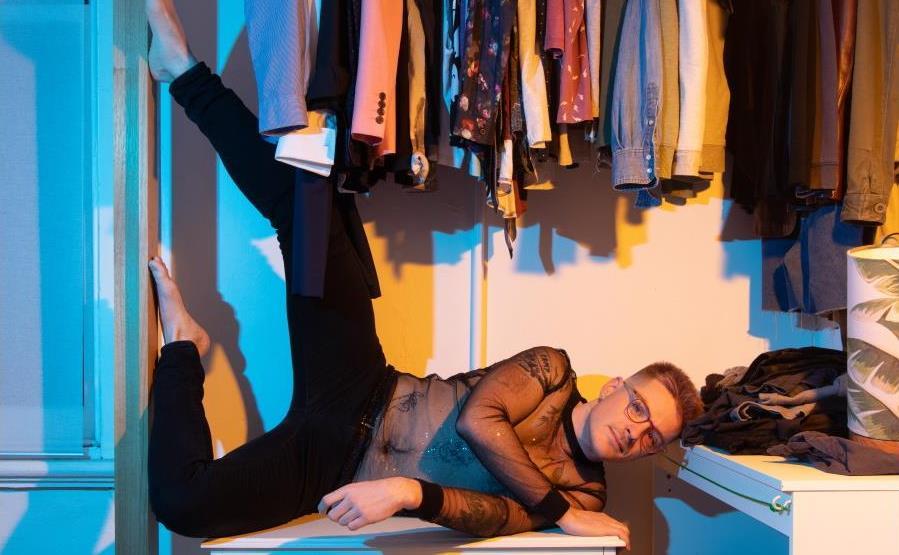 ‘What are the points of connection specific to queer experience?’ This is the question that this experimental production seeks to answer in 60 minutes.

It attempts to do this, and is successful on some levels, through weaving together the stories of queer individuals to convey the isolation, anxiety, fear, ecstasy and defiance that accompanies the journey of coming out.

Actor Christopher Bryant, the unnamed performer in this piece, brings a raw energy, a kind of nervousness to the narration that is extremely relatable in its sincerity.

Although he is narrating a collection of queer experiences from individuals that traverse age, location, gender, and disability, they are woven together in such a way that makes it appear plausible they could have all have been experienced by the same person. This creates a synchronicity that works well, however it is also problematic in some instances as the ‘collective’ experiences presented come across as somewhat lopsided, in that they represent stories predominantly from a male-identifying perspective.

The stories within the piece perhaps intended to mirror a queer woman’s experience seem to be sprinkled into the narration in a way that often feels jarring in comparison to other anecdotes.

In an opening sequence Bryant reads dialogue from a screen:

‘I remember when I was eight, watching SBS through the crack of my bedroom door. I could see two women getting it on. It was a dangerous and exciting image, and I knew I should forget it… but instead I took it to bed with me. I remember promising myself each time, “This is the last time I’ll do this.” I also remember not believing it, not even a little bit.’

For me, it was difficult to distinguish the male actor from his delivery of these lines that seemed intended to be a queer woman’s experience. But perhaps this was the point, that there’s universality in queer experience: does it matter who is fantasising about the women on SBS?

The set design was minimal with two screens, one that flashed Bryant’s dialogue continuously and another that posed a series of questions about queer identity. This worked both for and against the narrative. At times the text was too distracting, creating confusion as to where to look, at the performer or what was happening on screen? But this also worked in its favour as the second, larger screen posed questions which punctuated the end of an anecdote by asking contemplative questions such as: how can we reconcile being gay and how can we become better allies to each other? The subtle lighting changes complemented this. The floor was marked by a square design lit by LED lights which changed when the narrative took on a new direction.

Bryant’s writing on the whole is well-rounded: intellectual, sharp and witty, trying its best to reflect diversity in queer experiences which include anecdotes from people with disabilities and people who have eating disorders.

One particularly captivating scene explores the mental anguish of whether the protagonist should abandon a better sense of moral judgement and hook up with their long-time crush who is now only interested in them because they’ve lost a significant amount of weight.

During this scene we see Bryant pace, do push-ups and exert himself physically in a sequence that actively mirrors the internal debacle this scenario brings him. Romy Seven Fox’s score was a perfect complement to this scene, providing n gritty electronic musical undertone with staccato synth stabs that won’t let up, to amplify the character’s uneasiness.

New Balance manages to uncover the realities and difficulties of what it is to grow up queer, but also the defiance, resilience and happiness which comes from self-acceptance. There are some patchy areas, but the tone and intention set during this performance very much capture a breadth of shared experience.