A genre-bending show that explores the narrative of colonialism, culture and connection with humour.
Raelee Lancaster
[This is archived content and may not display in the originally intended format.] 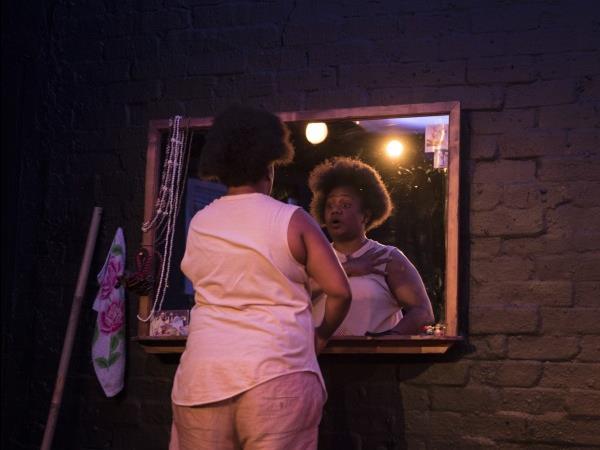 A mixture of drama, comedy, dance, soundscape, narrative and spoken word poetry, My Urrwai is a one-woman show that transcends genre. In the words of Ghenoa Gela, the writer and star of My Urrwai, ‘I don’t fit and will never fit into these Westerner ideologies… I’m just me.’

My Urrwai centres around the story of Gela going home to the Torres Strait, navigating the Country that she knew but had never seen, and performing her grandmother’s sacred, matrilineal dance on the Country where it first originated. Other stories – such as Gela losing her name to the Western education system and the complexities of religion and culture in Torres Strait Islander societies – are told alongside the primary storyline.

Lighting, sound and movement work together in harmony in this production, one never overpowering another. In the beginning, the blue light, ocean sounds and warm, fluid movements from Gela create a cool, meditative atmosphere that is then broken with changing colours, vocal tone and inflection, comedy, drama, more comedy, and so on. In the second half of My Urrwai, Gela plays with light and shadow to discuss coming out to her family and a violent black-and-red strobe effect accompanies a ferocious spoken word poem.

Certain scenes involve audience participation. On the night I attended, all the people chosen to participate – whether by accident or by design – were white people. This was particularly pertinent when, later in the show, Gela explained an incident between herself and the police and used a white participant as a placeholder for herself. At the end of the scene, she said to the participant, ‘How did it feel to be me? This will probably never happen to you.’

What stands out the most about My Urrwai is what the audience isn’t shown: namely, Gela’s grandmother’s ancestral dance. Gela says at the end of My Urrwai that there is a time and a place for that dance; that dance and the story it tells can only be passed down mother to daughter and it wasn’t for the audience to view with uninformed eyes. Instead, Gela uses song, movement and narrative storytelling to explore her emotions and experience performing her grandmother’s dance in the Torres Strait for the first time. In doing this, Gela sets boundaries between herself and the audience; boundaries that other Indigenous people struggle to set for themselves, boundaries that non-Indigenous people need to learn to respect.

My Urrwai, like its creator, is certainly unique. It explores the narrative of colonialism, culture and connection in a new and exciting way. The primary story and the secondary stories interweave and overlap beautifully, adding new context and dimensions to Gela and her urrwai. By expressing a wide array of emotions through different genres, Gela shows the audience what it’s like being a mainland Torres Strait Islander woman in Australia today, how blackfellas deal with racism in all aspects of their lives, and how, even when the going gets tough, we can all sit and have a laugh together.