An impressive new work. My Sister Feather is a terrific play, fully resourced in its theatricality and economy.
Liza Dezfouli
[This is archived content and may not display in the originally intended format.] 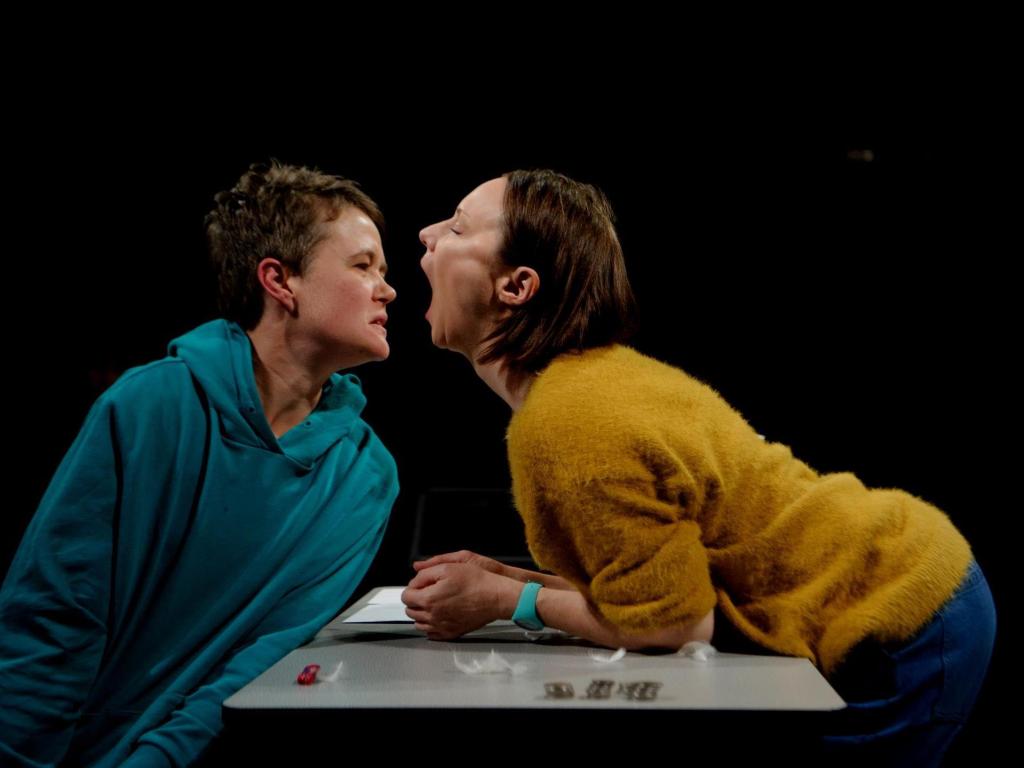 Presented by the Voice in My Hands, My Sister Feather by Olivia Stachell is a play about two sisters reunited after decades. Poignant and affecting, this is a beautiful work speaking to our longing to be connected, as well as a thorough portrayal of the effect of childhood trauma.

Egg (Emily Tomlins) is incarcerated in a semi-surreal women’s facility, where her imprisonment is as much psychological as real. She is constantly observed via camera; transgressions such as her throwing a lemonade can across the room are met with a loud buzzing noise, unbearable and painful to the ear. Egg has little in life but her nickname from her mother. (There is no mention of a father.)

We don’t hear about Egg’s crime but we gather it was serious. Egg has been parted from her older sister Tilly (Belinda McClory) for decades and when Tilly arrives on a special after-hours visit, Egg is shocked. She’s not pleased to see her and we later find out why. The older sister has created a life for herself; the younger is being punished. But Tilly has a reason for her visit – she brings two letters, one for each of them, from the mother who abandoned them as children, leaving them with no idea where she was or why she left. Their mother has recently died. Might the letters contain an explanation or an apology?

Egg was four when their mother left and to comfort her at the time, Tilly convinced her that their mother would return. The letters sit on the table between them, symbols of their unanswered questions.

The set (by James Lew) is stark; there is a vending machine and one table with benches fixed to the floor along with the camera on the wall. Besides the letters Tilly has brought Egg several books and two large packets of tampons – ‘to trade’ as Tilly says.  Small moments of humour are camera flashes in the dialogue, bringing their past into the present.

The movement of the play slides between the now and moments in the past where we see Tilly and Egg as children, horse-fighting and acting out nursery rhymes together and we come to appreciate the bond that helped them survive childhood, and to sense the enormity of whatever forced them apart. An episode where Tilly tries to contain Egg’s fury represents the dynamic between them.

Shortlisted for both the 2017 Rodney Seaborn Playwrights’ Award and the 2018 Max Afford Playwrights’ Award My Sister Feather is a terrific play, fully resourced in terms of theatricality, sensitively understated and well- constructed. (Emma Valente provided dramaturgy.)  Writer Satchell also directs with an objectivity unusual in the writer/director combination. The dialogue, what’s talked about, what isn’t, and the action, are presented in a ‘just enough to tell the story’ style; this narrative economy is one of the play’s strengths.

My Sister Feather is a sad story and as a viewer you don’t get to sit back and simply watch. Prolonged silences speak to grief and isolation. Both actors are stunning, these are affecting and intensely vulnerable performances. In the space between them a battle for supremacy is fought between loathing, resentment, agony on one hand and love informed by the long-held grief of separation on the other: playing out in the physicality of the work by the two actors. Tomlins carries  frustration and rage in her body while McCrory moves with the brittleness made up of layers of control, of denial. The unspoken and the physical carry the narrative along.

There’s no sentimental resolution here about the ties of blood or forgiveness, yet we see how, when there’s nobody else, the sisters may yet be able to reclaim one another.