The blend of tradition with innovation and technology ushers us into a new era – there is no going back – and frankly who wants to after viewing this Madama Butterfly production.
Gina Fairley 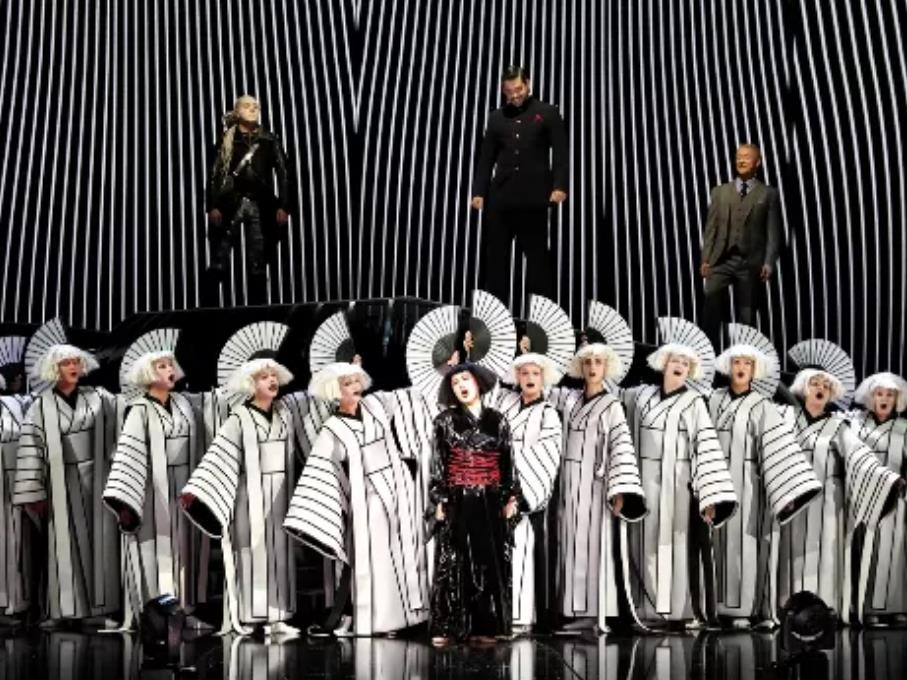 There has been a lot of noise recently about whether opera companies should rethink their presentation of the victimisation of women within the opera medium.

The reality is, while we may live in post #metoo times, the majority of repertoire was not created in that same environment.

How, then, do we present 18th and 19th century narratives within the frame of contemporary 21st century society – how do we tell those stories afresh, and how do we shift the tone against women, while staying true to the opera as conceived?

Graeme Murphy’s new production of Madama Butterfly has been unveiled this week in the thick of this debate.

The story in a nutshell: the infatuation of American naval officer Pinkerton leads to a ‘port-marriage’ to Cio-Cio-San while docking in Nagasaki (Japan) – an insensitive folly while awaiting his ‘real’ American wife. Cio-Cio-San’s love and loyalty is betrayed; thrown away like a used rag, her child child taken from her to be raised in a more ‘civilised’ America.

While Moffatt Oxenbould’s production (which has been retired after 20 years) seemingly softened this narrative with a sensual traditional beauty, Murphy’s could be described as its antithesis, with its overtones of fetishised Japanese culture and hints of bondage with the delicate beauty Cio-Cio-San repeatedly bound by ropes, and an echo of her persona, Butterfly, pinned to the wall early in the production.

This contemporary tone seemingly oscillates between past and present; cognisant of the implications of its narrative and its updated portrayal. This is perhaps most obvious in the character of the sleazy pimp Goro, who prances around in silver biker-style clothing, dreadlocks and constantly on a mobile phone, while Cio-Cio-San wears black PVC as her wedding gown, and the opera’s most famous flower duet – sung by Cio-Cio-San and her loyal servant Suzuki – is marked by the pair tagging the walls with pink graffiti.

There is an irreverence here that perhaps plays into that ‘rethinking’ of the female victim at the hands of Murphy. What it does is not so much rewrite Puccini’s colonial faux-pas but update it so that it sits more comfortably within a contemporary visual vernacular.

The use of Opera Australia’s new LED screens are the breakthrough point here. Working with creative associate Janet Vernon, and designers Michael Scott-Mitchell (production), Damien Cooper (lighting) and Sean Nieuwenhuis (video) this production is like no other Madama Butterfly – and it is spellbindingly successful.

For the moment the curtain raises and Cio-Cio-San tumbles onto the stage from suspended ropes – caught weblike until she falls into the arms of Pinkerton – the rope echoing across the screens that seeming amplify the narrative on stage.

It is followed by a dramatic black and white set, the project working beautifully in sync with the costumes of Jennifer Irwin.

An incredible moment in contrast are the way that Japanese kanji (characters) float up and get caught in the landscape as Karah Son as Cio-Cio-San sings solo on stage.

Son is jaw-dropping and consistent; she is ballsy and strong, and yet sensitive and rounded, and with a vocal range to match. The South Korean soprano has performed the role many times and brings that experience and complexity to her performance.

She delivers the heart-wrenching, big-hitting ‘Un bel di vedremo’ (One Beautiful Day) with incredible chutzpah – stopping the production for several minutes as the opening night audience celebrated her delivery.

That energy continued throughout; her connection with Spaniard Andeka Gorrotxategi in the role of Pinkerton was well cast. His creamy tenor range captured the emotions from obsessive passion to pathetic remorse.

Sharp perfectly balanced Son’s strength, holding her own presence, and bridging the space of street smarts and tradition; her Flower Duet with Son while spray-painting the LED screens was a treat.

While Puccini’s most loved opera was premiered in 1904 with a libretto by Luigi Illica and Giuseppe Giacosa, it remains one of the ten most performed operas internationally according to Operabase – in the 2017-2018 season alone it was performed 416 times.

So despite the exoticisation of women, written in the corridors of colonialism and its fashionable embrace of Orientalism, audience continue to demand to see Madama Butterfly on our stages.

You are never going to change Puccini’s Butterfly per se, but Murphy has demonstrated how you can shake it up. This is an exciting and fresh opera that feels a little irreverent, a little gritty, and yet full of pathos and passion for the great art it embraces.

The blend of tradition with innovation and technology ushers us into a new era – there is no going back – and frankly who wants to after viewing this production.