The Danger Ensemble’s provocative reinterpretation of The Scarlet Letter is a forceful critique of patriarchy.
Tahney Fosdike
[This is archived content and may not display in the originally intended format.] 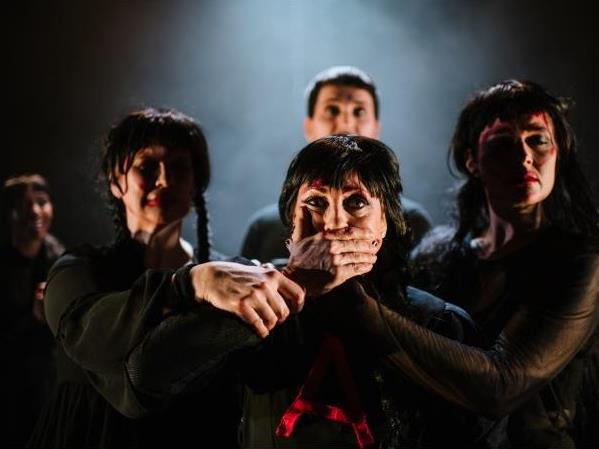 Let Men Tremble is a provocative work which shakes the patriarchy until its weak at the knees. The production is led by The Danger Ensemble, an experimental theatre company which reinvents classics to challenge contemporary ideas and audiences. This time, they twist and crack Nathaniel Hawthorne’s 1850 novel The Scarlet Letter into a forceful critique of the patriarchy’s refusal to loosen its systematic control on institutions and its contamination of the historical record.

The production opens with seven women dancing to pop music as three male observers take notes before casting them in the play, The Scarlet Letter. As the women dress, the men introduce themselves with dozens of male titles and names, announcing themselves as the creators of the story. The plot continues in a fragmented fashion, with The Scarlet Letter’s traditional narrative, character monologues, actors breaking out of character, and various songs and dance numbers. The monologues, such as Chris Beckey’s commanding rejection of their character of the priest as a queer person, lament how men silence women and other minorities. Slowly, the characters revolt and commit to telling the stories that have been erased. This compelling feat is elevated by the cast’s diversity, flexibility and ability to work in powerful harmony.

The show distinguishes itself with its production style, each element carrying suitable symbolism and building momentum. Religious motifs hold well for patriarchal tyranny; a cross looms in the darkness above the set and a ringing church bell carries ominous tones. Chillingworth (Leo Thompson) and Wilson (Danny Carroll), two clergymen of The Scarlet Letter, carried books labelled ‘Bible,’ ‘Script’ and ‘History’ as evidence of men controlling religion, theatre and understandings of the past. However, the strongest element is costuming: at first, the women are homogeneous in their black robes and long black wigs, but the play’s mood shifts as they break away – Pearl (Nicole Harvey) wear a red bikini and transitions into a chicken with a red mask – until all the women and Beckey don red attire like a skin for their mutiny.

From its opening act, Let Men Tremble signifies the suffocating oppression of the patriarchy. While echoing a 17th century narrative, its themes resonate and its experimental structure conveys the exhaustion of fighting patriarchy, or surrendering with shame to its abuses. The play posits that discrimination endures as men empower themselves in every facet of life without self-critique. But the play also activates a reclamation of power by summoning those killed by men, from Joan of Arc to Eurydice Dixon, before rejecting god as the epitome of men’s narcissistic domination.

With a subversive script, talented cast, and on point production, The Danger Ensemble assertively reworks the puritan literary classic for a contemporary gaze. The production does not confront the patriarchy; rather, it galvanises its audience by recognising bitter truths and offering revolt as remedy. Let Men Tremble is an uproarious feminist call for women, non-binary and queer people to move on from their diminished roles in history and crush the patriarchy’s malignant reign on their stories.