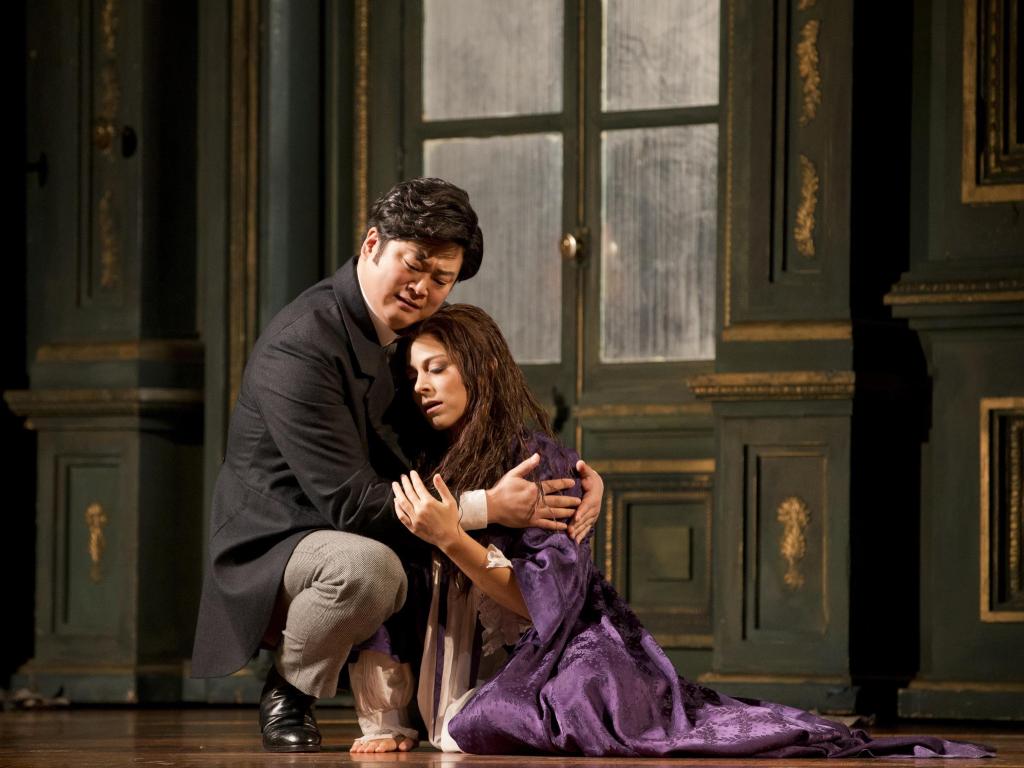 Giuseppe Verdi’s well-known La traviata (‘The Fallen Woman’) with libretto by Francesco Maria Piave is based on the play La Dame aux camélias (‘The Lady with the Camellias’) itself adapted from a novel by Alexandre Dumas, fils. The work’s subject matter, a young, beautiful yet ill courtesan who runs short of funds then sells everything to seek redemption, eventually becoming destitute and dying of consumption, was considered morally questionable, particularly at its first performance in England in 1856, though it is now a much-loved inclusion in the standard operatic repertoire as it presents a debate between indulgent pleasure, pure love and the sacrifice of duty.

Making her debut for Opera Australia, American soprano Corinne Winters made a good impression in the role of Violetta Valéry, the opera’s main character. The rich sound and particular texture of her voice is unique. A powerful actor, her final act was especially potent with her voice often floating with sustained fragility. There was a need though for her overbrimming ebullience as the effervescent party girl dedicated to pleasure in the first act to be stronger as a counterbalance to the reality of her grim destiny.

South Korean Yosep Kang (Alfredo Germont) has a fine, clear and expressive tenor voice with an impressive range. He was a good actor as well, though somehow fell short of forming a firmly convincing romantic chemistry with Violetta in Act 1. John Longmuir, Tom Hamilton and Adrian Tamburini were darkly effective as the exploiters Gastone, Marquis d’Obigny and Baron Douphol, each with reliable, strong voices and telling dramatic presence. Gennadi Dubinsky was excellent as the forbidding Doctor Grenvil in the work’s final act contributing a granite bass foundation to the final tragic quintet.

But it was José Carbó in Act 2 as Alfredo’s stern yet sympathetic father Giorgio Germont who was particularly confident and effective. Dominica Matthews was splendidly vivacious as Flora Bervoix while Natalie Aroyan excelled as Annina, Violetta’s maid.

Orchestra Victoria provided a highly effective performance throughout, right from the searingly exposed and tender opening bars that led to the boisterous if somewhat brisk brindisi under the carefully detailed direction of Carlo Montanaro.

It was a privilege to revisit this very fine production by Elijah Moshinsky, first staged in 1994 on luxuriously sumptuous Moorish sets by Michael Yeargan with Peter Hall’s dazzling and extravagant costumes under the enchanting and nuanced lighting of Nigel Levings. The Opera Australia chorus was in fine form, expertly prepared by chorus master Anthony Hunt.