Review: In The Club at Adelaide Festival

STCSA commissioned Patricia Cornelius to write about football and sexual misconduct. The result is a powerful piece of theatre.
Richard Watts 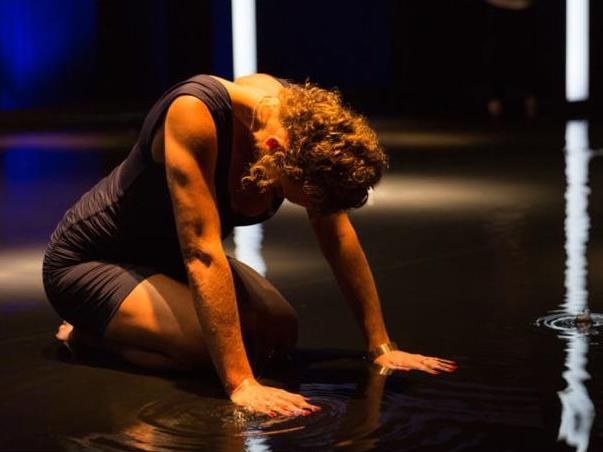 The ground can shift easily beneath the feet of a young woman determined enough to take a footballer to court for rape or sexual assault, as public opinion ebbs and flows around her. What else did she expect? She’s only in it for the money. She was asking for it. Those poor boys.

In the State Theatre Company of South Australia’s (STCSA) In The Club, Patricia Cornelius’ timely meditation on women, sport and sexuality, there is no ground – the stage is a shallow pool of water. Every movement, every step, every shift of weight, spreads ripples. Images dance and distort.

Periodically, soft sprays of water drift down from above, evoking curtains of mist at early morning footy training, the steam and showers of a clubroom, cleansing rain – and tears.

Oft-described as Australia’s most awarded playwright never to have appeared on the mainstage, this STCSA commission breaks the drought that had previously seen Cornelius – a winner of multiple AWGIES, Fellowships and Premiers’ Literary Awards –  relegated to the sidelines; to the world of independent theatre and the small-to-medium sector.

It’s not quite true to call this production an explosive mainstage debut – there’s a pronounced sense of directorial restraint that results in a distancing effect, so that the play is more observed than felt, though this also showcases the playwright’s muscular, poetic script to great effect – but there’s also a keen intelligence on show: both in the text and in the striking and fascinating design co-credited to Geoff Cobham and Chris Petridis.

The watery stage is flanked by beams which when illuminated, evoke goalposts. Horizontal strips of white light at the rear of the stage recall the boundary lines of football fields, while also reminding us that boundaries are all too easily and painfully crossed. Gazelle Twin’s compositions and Andrew Howard’s sound design combine to powerful effect: one moment full of subtle whispers, the next a pulsating nightclub score accompanied by strobing lights.

Amidst all this are three women, introduced by three compelling monologues at the beginning of the play.

Annie (Miranda Daughtry) is a footy-mad teenager who loves the game, plays it well, and idolises its professional players for their skills, not their looks. When her ‘boys’ visit her school she’s desperate for them to notice her. When they finally do, the consequences are devastating.

Olivia (Rachel Burke) has never been in love; she’s barely even had sex. ‘Too scared of men, I guess.’ She has reason to be.

Ruby (Anna Steen) is Olivia’s polar opposite. Sensual, sexually confident, sexually aggressive – she loves footballers, loves their bodies, loves fucking them. She knows what she likes and pursues it without regret or guilt – but always on her own terms.

Then there are the men: Sean (Dale March), James (Nathan O’Keefe) and Angus (Rashidi Edward). They’re less clearly drawn at first, moving together in a braying, choreographed pack; only as the play unfolds do their personalities start to emerge. James is the ageing warhorse, Angus more innocent, and Sean – Sean is angry and entitled.

A sense of menace builds throughout the proceedings, but Cornelius, together with director Geordie Brookman and associate director Suzannah Kennett Lister, keep us guessing; the outcome is unpredictable, and shocking when it occurs.

Not every performance lands – March doesn’t seem to inhabit his role to the same extent as his colleagues – but at their best the ensemble shine, with the chemistry between O’Keefe and Steen, and Burke and Edward, compelling and convincing. As Annie, Daughtry is fiercely committed; ferocious with a hint of fragility yet fierce and unafraid. Her most powerful moment is wordless, arms outstretched in a ‘come at me, bro’ moment as she stares down a man’s anger and her own pain.

Minor details distract – footballers are uniformly better dressed and better groomed than the men we see here, and the male actors lack the loping muscularity of professional sportsmen (a movement coach or choreographer may have assisted in this regard) – but taken as a whole, In The Club is a rewarding and assured production. It doesn’t always kick goals, but even the points it scores are timely, assured, and carefully controlled.