Shechter’s no-holds-barred style is brought to life in brilliant fashion by an all-Australian cast.
Jo Pickup 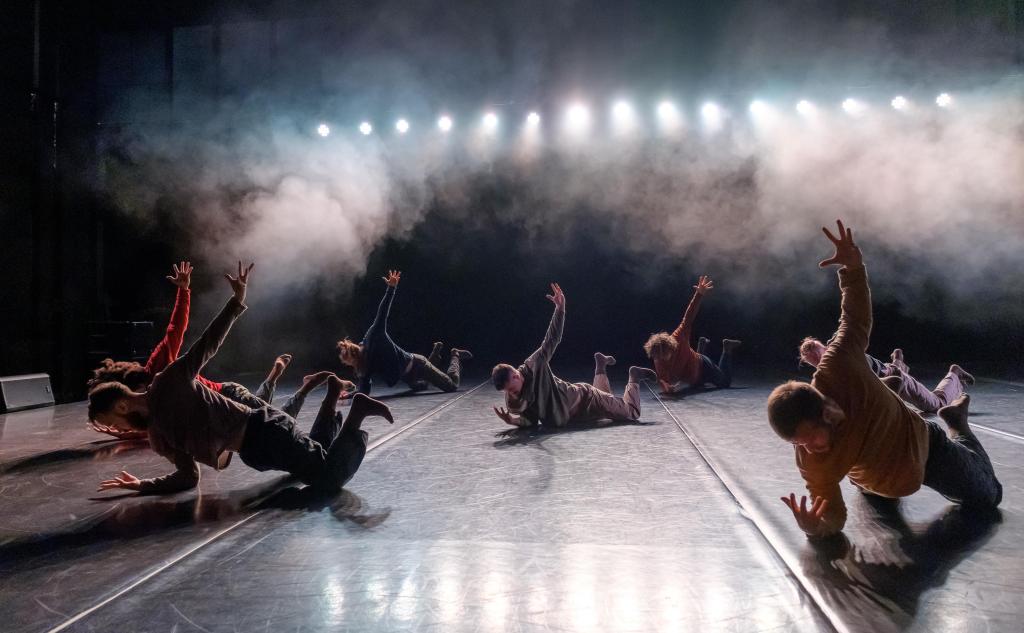 Hofesh in the Yard is a double bill of contemporary dance in which the work of an international dance icon is spectacularly performed by a cast of ten independent Australian dancers.

In the contemporary dance world, the name Hofesh Shechter resounds with superstar acclaim. Originally from Israel, Shechter trained with boundary-pushing Israeli dance legend Ohad Naharin in the 1990s, but soon moved to London to pursue his own thing and establish his own company (in 2008).

On his rockstar-like rise to fame, a breakthrough work was his 2006 piece, Uprising, an all-male dance consistently adored by audiences and critics worldwide for its striking and percussive physical rush.

As the opening work in this Perth Festival double bill, Uprising is a triumph.

We sit in the open-air courtyard space at the State Theatre Centre WA in front of a darkened stage. A stunning baseline beat (co-composed by Shechter himself) throbs into being. A strip of blinding lights shine out to reveal an army-line of solid silhouettes – seven male figures who erupt into a downstage march.

Their mostly bearded faces and muscular builds are clad in autumnal-coloured cargo-wear with thick army-green socks on their feet. They dive, crouch and storm their way across the stage in a series of clever choreographic patterns which align to the relentless 4/4 rhythm underscoring their every move.

This Perth Festival season of Uprising has been exceptionally well cast (by Hofesh Shechter company representatives who chose the cast from a series of Perth auditions). This band of brothers (sadly too many to name individually in this review) exude powerful and cohesive collective energies, and show nuanced individual prowess.

Their movements can be angry, though their presence is not. These are young men grappling with inner turmoils and emotional weights within a hardened military state, and one cannot help but read this as a revelation of the choreographer’s own experiences as a young man during his compulsory service with the Israeli Defence Force.

In the end, we see performer Robert Tinning scramble onto the shoulders of his fellow soldiers to reveal a small red flag, raised gently into the air. It’s a strange decrescendo to their emotional battles, and an ironic end.

The final half of Hofesh in the Yard showcases Shechter’s 2015 creation tHE bAD. This time, ten dancers take flight (five male, five female) in a very different, though no less relenting, physical onslaught.

In this work, the slick, gold-lycra-clad forms of the performers act as futuristic cogs within a well-oiled machine. They are amazingly precise and electric in their punches, lunges and strikes, which are backgrounded by intense chimes of hard-rock music. This is high-voltage, full-metal dance, which at times tips into overdrive. While the dancers never fail to hit their targets (Nikki Tarling and Rhiana Katz were particularly eye-catching performers on the night of this review), some of the work’s design seems gratuitous and overtly sexualised.

All in all, the chance to experience Shechter’s no-holds-barred style – brought to life in brilliant fashion by an all-Australian cast whose performances are unequivocally world-class – was a thrill. It’s a credit to the tireless efforts of choreographic centre STRUT Dance who continue to bring exciting international dance works to the local Perth scene. This season is a must-see.