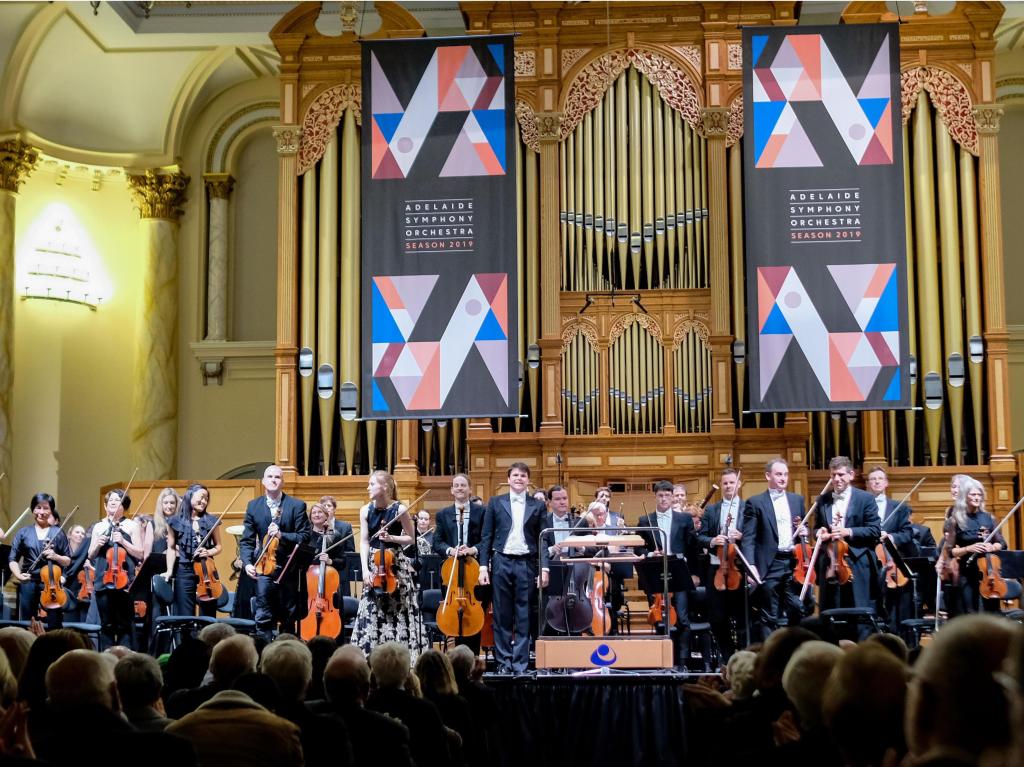 Nicholas Carter’s tenure as the Principal Conductor of the Adelaide Symphony Orchestra has come to an end and he is returning to Germany where he is Chief Conductor of the Stadttheater Klagenfurt and the Kärntner Sinfonieorchester.

Back in 2016, his appointment was significant as he was the first Australian – and a young Australian too – to be chosen as the principal conductor of an Australian orchestra in over thirty years. And he has not disappointed, proving himself to be an enthusiastic and intelligent conductor.

The two performances of Faith & Beauty were his last as Principal Conductor but he is already booked to come back to the ASO next year, so he is gone but not forever.

Faith & Beauty opened with Dvořák’s Violin Concerto, a wonderful piece of musical Bohemia. The solo violin was played with understated elegance and charm by Grace Clifford, the ASO’s Emerging Artist in Association. Clifford is a delightful young musician with a lovely lyrical touch. Her violin danced gaily through this colourful and vigorous work and she was exceptional in the passages in the higher register. She appeared relaxed on stage, fully engaged in the music and interplaying well with the orchestra. At just 18-years-of-age, we can only anticipate the stellar career ahead of her. The audience was rightly appreciative of her musicianship, calling her back for multiple bows. The orchestra, too, showed their fulsome appreciation of her gifted playing.

After interval, ASO Managing Director Vincent Ciccarello came on stage to say a few words of thanks to Nicholas Carter and present him with a ‘thank you’ set of ASO recordings, playfully masquerading as a set of steak knives.

The rest of the concert was filled out with Anton Bruckner’s lengthy Symphony No. 5. Carter took a moment to introduce the work, explaining that it is really only at home in Austria and acknowledging that the composer was perhaps in need of a new PR manager. Interestingly, this work hasn’t been played by the ASO in almost seventy years.

Bruckner’s large-scale compositions make huge demands on the orchestra and are not always immediately rewarding for the audience. They are full of drama and intrigue and often inspired by the composer’s deep religiosity.

And it is indeed, a big, bold work full of dramatic turns of phrase and unexpected scoring. Even so, there is, as Carter said ‘a beautiful internal logic’ that manages to hold it all together. This is a work for the aficionado rather than the casual listener, being dense and chaotic. It was clear that Carter and the ASO were up to the challenge, from the thrumming of the pizzicato to the explosive finale.  With almost 70 players on stage, including six basses and impressive brass and woodwind sections, the sound easily filled the magnificent Adelaide Town Hall. Bruckner’s Fifth was a powerful piece and an impressive, if somewhat curious, choice as Carter’s farewell.

Faith & Beauty was a superb concert that left the audience enriched and invigorated.