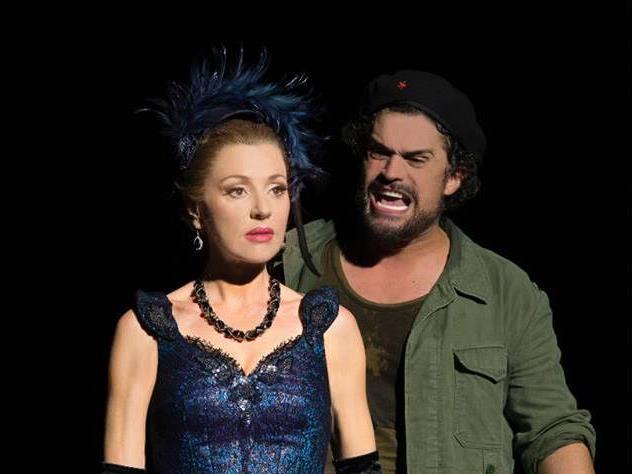 Tina Arena stars in Evita The Musical. Photo via evitathemusical.com.au

A full-scale musical biopic about the wife of an Argentine dictator seemed an unlikely recipe for theatrical success back in the 1970s.  But add the magic of music by Andrew Lloyd Webber and words by Tim Rice and you have Evita, a classic piece of musical theatre that has been seen and loved the world over.

Forty years on, and a new season of Evita opened this week at the Sydney Opera House with Tina Arena in the lead role of Eva Peron, the working class girl and former actress who becomes rich and powerful as the wife of Colonel Juan Peron.

This production is a revival of the original West End show directed by Hal Prince that premiered in 1978.  It is relatively modest in its staging, with minimal sets and little decoration.  The clever lighting design, by Richard Winkler, is brilliantly effective and vital to changing the atmosphere on stage.  The colour palette is striking, especially in the scenes where the Argentine aristocracy, dressed in black and white, are contrasted with the military uniforms in bright blue, red and white.  Large-scale projections above the stage of original photographs and footage give context to the action and remind us that the show is based on real events, even if that reality was undoubtedly much darker and more corrupt than is shown here.

Evita The Musical. Photo via evitathemusical.com.au

Tina Arena makes an impressive Eva.  She is simply stunning in the famous balcony scene at the opening of Act 2 when she enters in a white ball gown and bling and gives voice to the show’s iconic song ‘Don’t Cry for Me Argentina’.  Arena has a powerful voice and handles all the songs with panache.  Kurt Kansley conveys all the guile and charm of the revolutionary Che, striding across the stage as both narrator and commentator. Paulo Szot is a powerful Colonel Peron whose strong, rich baritone gives him strength and gravitas.  Michael Falzon is an engaging figure as Magaldi and Alexis Van Maanen has a beautiful moment as Colonel Peron’s spurned mistress with her heart-breaking song ‘Another suitcase in another hall’.  The ensemble and children’s chorus add to the experience of Evita and the Latin dancing is especially evocative.  Largely unseen down in the pit, the 29-piece orchestra, under Musical Director Guy Simpson, gave a splendid performance.

Evita opens with Eva Peron’s funeral and goes full-circle, ending with a fade-to-black as her coffin lies in state centre-stage.  This is a fully sung-through show, with no explicating dialogue, so careful attention to the lyrics is needed to follow the story.  And as a revival, it is a period piece and needs to be seen and appreciated in that context. But for most people it’s all about the songs, and they won’t be disappointed with this production.