Despite a strong cast, the emotional resonance of Winton’s epic story is buried in the bluster.
Zoe Barron 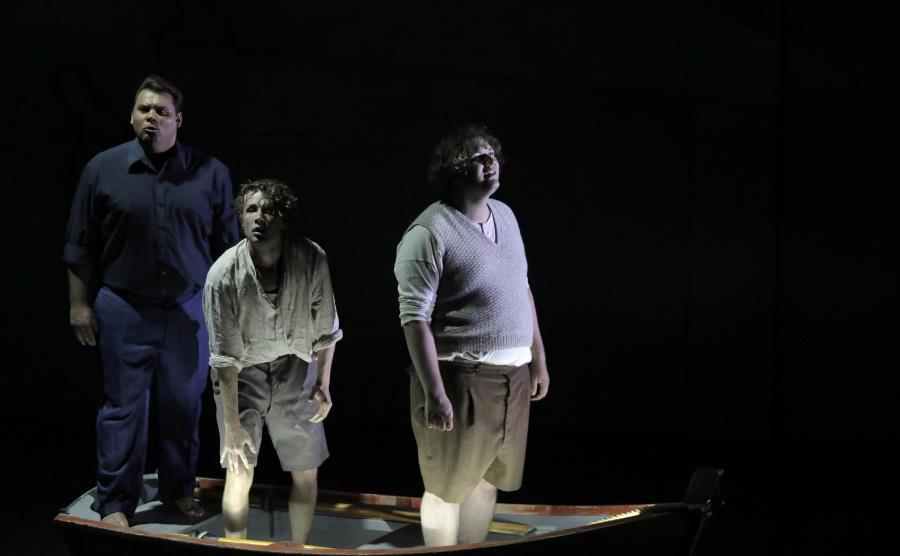 Tim Winton’s classic 1991 novel, Cloudstreet, was adapted for the stage in the late 90s. I was about 13 at the time, and Mum took me to Brisbane to see it. At a little over five hours, including a dinner break and short intermission, the undertaking was anything but cursory; and while I don’t remember much of the content, the engrossing experience of the colossal, two-decade journey in a single evening stuck with me.

Last year, for Malthouse, Matthew Lutton dredged up the old script, adapted by Nick Enright and Justin Monjo, and mounted it over. The story is anchored around a ramshackle, haunted old house, inhabited by two sprawling families in about the same condition. The Pickles family, steeped in drink, sex and gambling, inherit the place – a former mission house for First Nations girls – and, forbidden from selling it for 20 years, they move down from Geraldton to live there. To cover costs, they rent out the other half to the hard-working, Bible-bashing Lambs, a rural family fleeing the bungled miracle of the near drowning of their son Fish. Fish, played here by autistic actor Benjamin Oakes, emerged alive but with a brain injury. The characters are messy and complex enough, poorly navigating their way through trauma, postcolonial consequence and financial instability, with occasional truces for community gatherings or celebration.

Cloudstreet has chaos at its heart, but from that chaos it carves out moments of quiet sentimentality and contemplative beauty. It’s these that save the narrative. Lutton’s version, however, rarely slows down enough to create the necessary pause, and any emotional resonance is quickly buried in the bluster. Drama is harshly manufactured in sudden blackouts resounding in gunshots that rattle the speakers. Crucial plot points and moments of acute action happen before eyes can adjust to the stage lights. The audience have only just realised Quick Lamb is on stage before he’s half gutted by a roo, or nearly hit by a train. The iconic, exquisite moment of Quick and Fish Lamb in the rowboat in the river – stars and water melding until the characters seem to be soaring through space – starts beautifully enough: real water seeps up through the floorboards while Paul Jackson’s lights marble off it onto Zoe Atkinson’s (otherwise fairly drab) set. But then the flabbergasting sudden blackouts again, and those gunshots, like sound designer J David Franzke got the effect for Christmas. Once more, the magic is lost and the plot collapses back into quagmire.

Admirably, the script is spruced with diversity, including an emphasis on the Indigenous aspects of the story, the addition of Noongar language, and the inclusion of a culturally and neurologically diverse cast. The same urgent execution renders these elements self-conscious, however – stacking them on top rather than weaving them into the plot.

Fortunately, the performances work to salvage the production. Skilfully cast and sharpened by a season at the Malthouse in Melbourne, the team are tight. There are a few real stand-outs, not least Bert LaBonté, who plays the tumble-down character of Sam Pickles with a warm honesty and playfulness that is as disarming as it is completely beguiling. Alison Whyte and Greg Stone embody Oriel and Lester Lamb with similar conviction, while Natasha Herbert’s Dolly Pickles fills up the whole stage. Most of the rest of the company play several different roles each, and they roll quickly and seamlessly between them with a distinction and deftness that carries the significant heft of the production. Crucially, though, the relationship that forms the backbone of the story, is never fully realised. Brothers Quick (Keegan Joyce) and Fish Lamb fail to connect onstage, and the relationship disintegrates from tender, unconditional love into reluctant babysitting.

Only in the second act does the play achieve a modicum of quiet beauty. By the third, outside of a few striking moments, it crumbles into a tidy children’s book ending, with a final spectacle bringing the production to a bedazzling, but ultimately underwhelming, close.