Further reflections and critical responses to events programmed as part of the 2018 Darwin Festival.
Richard Watts
[This is archived content and may not display in the originally intended format.] 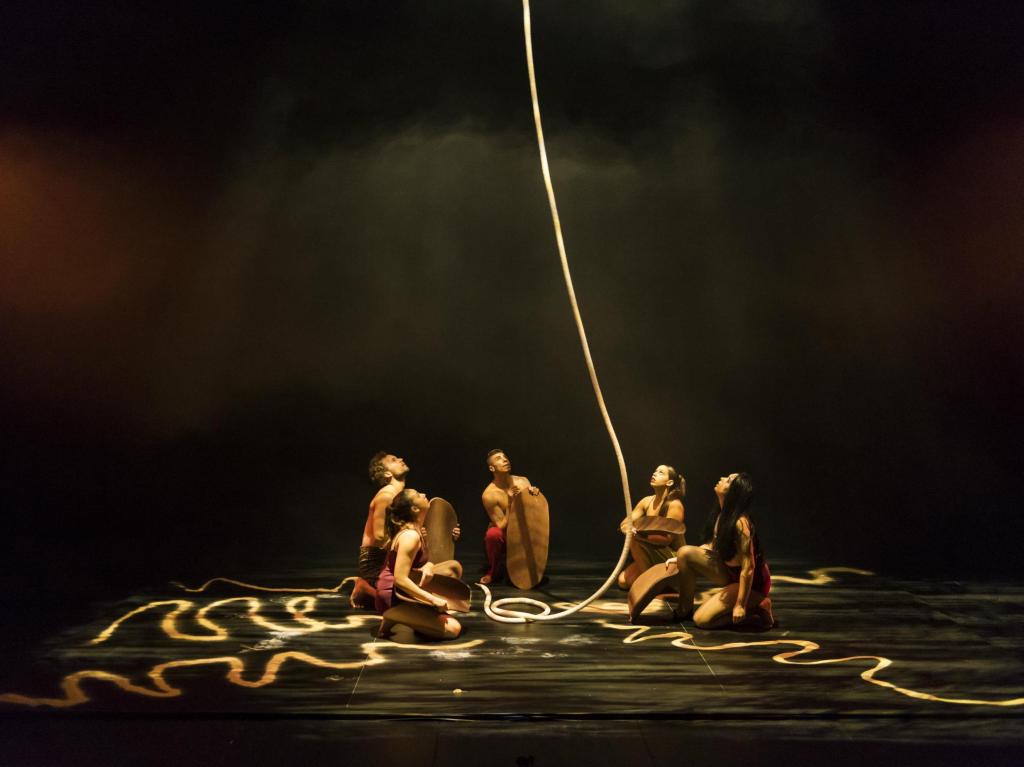 Originally staged at Yirramboi Festival in 2017, Chasing Smoke is a fusion of two unique traditions: contemporary circus, an art form spawned in the early 1970s, and the rich culture of Australia’s First Nations people, who have inhabited this continent for at least 65,000 years.

Created through the Circus Oz Indigenous development program BLAKflip, and directed by Casus Circus co-founder Natano Fa’anana, Chasing Smoke fuses circus, dance, storytelling and comedy, and although the results are occasionally uneven, there’s no mistaking the promise this production embodies.

Jack Sheppard, Dylan Singh, Harley Mann, Ally Humphris, Lara Croydon and Pearl Tia Pearce-Thompson – the six performers in Chasing Smoke – make up Australia’s first Indigenous circus ensemble. Given what circus as an artform has achieved in just five decades, it’s clear that these performers, and their peers now and in the future, will achieve much in the years to come.

The production opens with a direct address to whitefella clichés of Aboriginal life, slyly undercutting stereotypes with more truthful representations of contemporary existence: a hunter gather returns with fast food, dot paintings become bingo cards. Elsewhere, the comedy sequences which punctuate the production feel occasionally labored and repetitive, and might benefit from enlisting an outside eye, such as Indigenous comedians Matt Ford or Steph Tisdale, to help polish and refine the material. The best such sequence, however, is breathtaking – literally – thanks to the extremely pointed nature of its pitch-black humour, even as it suffers from some repetition.

The strongest sequences in Chasing Smoke speak to the individual strengths of each performer.

Drawing upon images of Aboriginal prisoners in shackles, Singh breaks free by taking to the trapeze, though throughout his act, rope restraints remain – perhaps speaking to the bonds of prejudice which hamper even the most independent First Nations people today.

Mann’s dexterous and exquisite corde lisse routine is the clear highlight of the show. He demonstrates both strength and grace, blending fluid gestures and remarkable skill. As Mann climbs and tumbles, the snaking end of his rope both echoes and disrupts snake-like sand designs drawn on the stage – evoking both the destruction of old traditions and new patterns emerging from the chaos.

The loss of tradition and language is reiterated by all the performers in a series of pre-recorded monologues that punctuate the production; moments which reveal personal pain and family trauma, and which ably demonstrate the wide-spread destruction caused by the European invasion of Australia. Such sequences are illustrated by movement-based solo acts, and while engaging, the skill level on display is not always of the highest standard.

Conversely, some of the group sequences (in which the show’s Circus Oz DNA is writ large) are delightful – there’s a palpable chemistry evident between the performers, especially in a playful sequence emphasising gender rivalry. Two performers skillfully invert traditional gender roles in circus to great effect, while a range of judiciously selected musical selections add pathos and charm to the production.

Sequences illustrating how awkward it can be to be put in a box, and a routine which uses cake-baking as a metaphor for racial prejudice, also entertain. A final monologue, while earnest, is also deeply moving.

Performed in a hotel room for an intimate audience of 14, Joel Bray’s Biladurang is a sophisticated, frank and affecting exploration of self, shame, and self-doubt.

Bray, a skilled dancer whose career to date has seen him perform in France, Portugal and Israel as well as with Melbourne’s Chunky Move, is a fair-skinned Wiradjuri man who trained at NAISDA and WAAPA.

In Biladurang, a solo dance-theatre work inspired by his heritage, lived experience and identity, Bray bares all – emotionally and physically – segueing smoothly from adolescent encounters with pornography and drug-fueled adult hookups, to questioning his own identity as an Aboriginal man.

The work’s title comes from the Dreamtime story of the platypus, a creature part duck, part water-rat and rejected by its mother’s tribe; a story that clearly resonates with Bray.

His monologues display a similarly confident tone (though one sequence feels slightly expository and its transition slightly jarring) and his interactions with the audience are also proficient – so much so that by the end of the performance, the sense of intimate trust Bray has generated among those assembled in his hotel room is palpable. Consequently, audience members willingly offer up their own confessions towards the end of the performance, adding to the powerful spirit of connection and communication generated in this revelatory and compelling work.