Musical isn’t where one’s mind first goes when one thinks of Carrie.
Glen Falkenstein
[This is archived content and may not display in the originally intended format.] 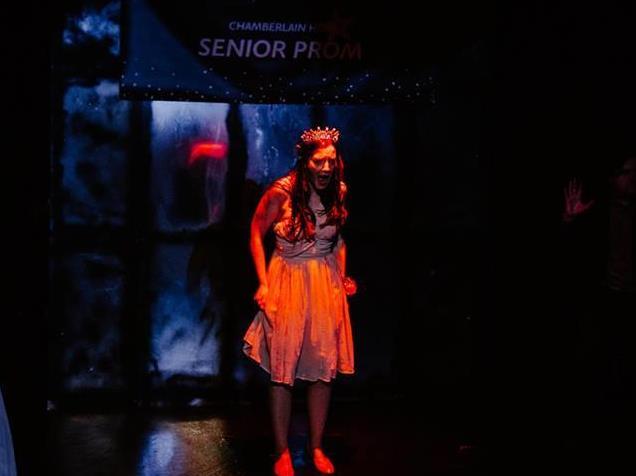 Kirralee Elliott as Carrie in Carrie: The Musical. Photo by Rebecca Lynne Photography.

Brought to life at Marrickville’s Depot Theatre – fresh off Riverdale’s tongue-in-cheek take on the play – the first Stephen King novel adapted to screen reckons heavily in the minds of filmgoers everywhere for good reason.

Carrie’s sheltered upbringing, the exclusion she is subjected to in high school and her burgeoning telekinetic powers famously lead to some memorably shocking sequences. Here Carrie is staged with some tunes to boot.

Heavier on the melodies than the scares, the few occasions where Carrie’s (Kirralee Elliott) powers result in upheavals are among the best of the production. Managed very well, this production uses simple and effective (if seldomly deployed) theatrics for the big event – the one which will no doubt have King fans reserved in quiet anticipation. Matching clever sound design with some more physically demanding advents, the sequence is a creative highlight.

The cast of Carrie: The Musical. Photo by Rebecca Lynne Photography.

Interestingly and adding to the play’s benefit, the team have kept the context of the events largely non-specific. Characteristics of the novel’s setting, famously decades ago, are largely anachronous to the presence of say mobile phones that make a small showing; but one innovation which renders this still very relevant story just that bit more relatable.

The ensemble pieces are among the strongest, with the placement of the stage occasionally causing performers in solo numbers or duets to sing directly away from tranches of the audience. A key scene between Carrie and her mother (Michele Landsdown) lacks intensity, consequence and a necessary illustration of the extent of Carrie’s abilities (only teased in passing throughout). This scene lacked the effective groundwork needed for the play’s two ensuing and most shocking sequences.

Elliott is a stand-out as the outcast slowly coming to terms with her abilities, here matched by Rachel Tunaley as Carrie’s least favourite classmate Chris. Headlining the song ‘The World According to Chris,’ the quality of this number is only bettered by the troupe’s upbeat, exuberant rendition of the much better known ‘A Night We’ll Never Forget’ where the skills of the talented ensemble shine through.