Sondheim’s Assassins is a darkly ironic version of 'The American Dream' and a savage critique of our times.
Lynne Lancaster 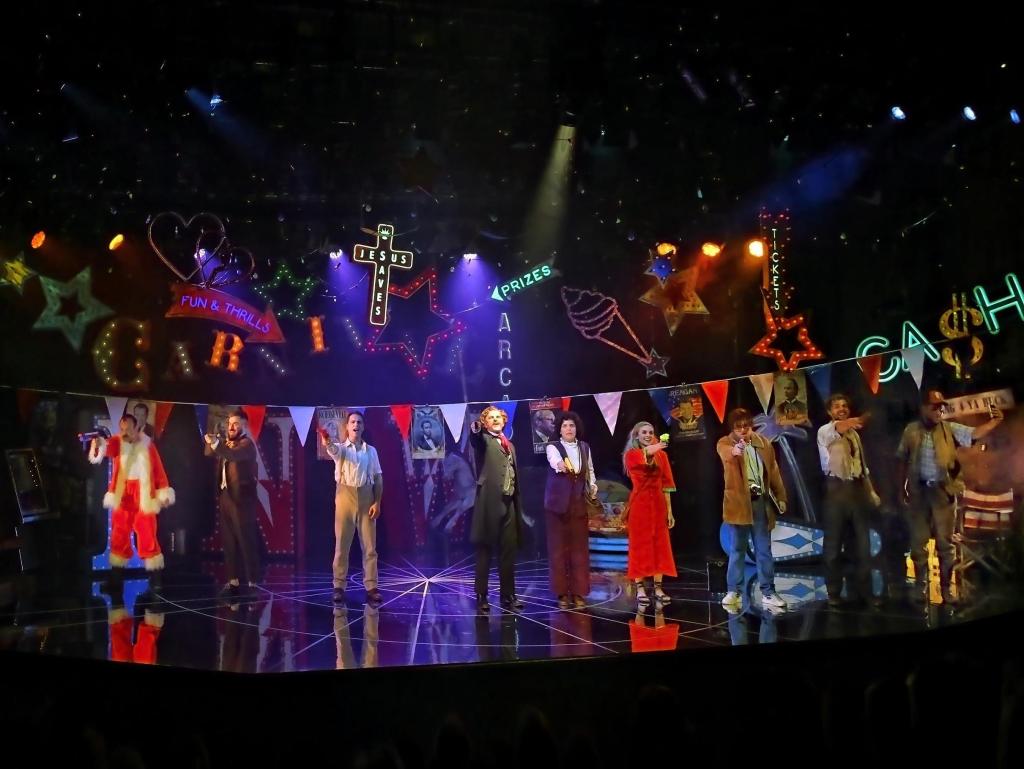 The cast of Assassins at Sydney Opera House. Photo by Prudence Upton.

In a dilapidated fairground shooting gallery an uneasy group of misfits gather. They are quite a diverse ensemble, including one figure dressed in a 19th century frock coat and another as a department store Santa. Each has an obsession or problem they need to solve and each has found the answer – they must shoot the President of the United States!

Assassins is a carousel inhabited by the killers and would-be killers of American Presidents past.

As the show unfolds we learn of the many varied and unusual ways that each has committed (or tried to commit) the appalling crime. Their motivations and their desire are clear: to be recognised for their actions in a world where they are mostly ignored, dismissed and treated as invisible. The group become a sort-of-family, bonded by their readiness to use a gun and their assorted grievances.

Set ‘outside time’ the chronology is as jumbled as the assassins’ minds yet still makes weird sense.

This production was originally performed at the Hayes Theatre last year and transfers excellently to the bigger Playhouse at the Sydney Opera House. Dean Bryant‘s direction and the fabulous cast are superb. There are a notably a few tiny changes to the taut, tense staging. In tandem with Ross Graham’s lighting, the designs are extraordinarily effective. Alicia Clements crowds the stage with tawdry fairground remnants (WIN! as the neon light letters say) and various dingy large pieces of paraphernalia (a jukebox, a pinball table, a dodgem car and fairy lights) as well as various poster/photos of the assorted Presidents as changed by The Proprietor (Rob McDougall). The stage itself is shiny and reflective and one notices the design of the rifle cross-hairs falling centre stage.

Musically Sondheim’s score is brilliant. Assassins is a wittily ironic tribute utilising the various styles across the various eras included echoes of a Sousa march and Stephen Foster – as well as sizzling hard rock electric guitar. Led by Musical Director Andrew Worboys, the terrific band (hidden behind the scenery) gives a vibrant performance.

The cast is mostly the same as last year’s but new to the cast are Anthony Gooley as Byck, Luigi Lucente as Zangarra and Madeleine Jones as Emma Goldman.

David Campbell as John Wilkes Booth stalks the stage magnificently and gives an intensely charismatic performance with intimidating power, at times appearing like an avenging ghost and acting as the encouraging spokesperson for the rest of the group encouraging Lee Harvey Oswald. Booth acts as an anchor for the show in partnership with the Balladeer, linking the sparkling song and dance episodes with the storytelling.

Maxwell Simon gives a splendid performance doubling as The Balladeer with his guitar for most of the show and then morphing into Lee Harvey Oswald (who shot President John F. Kennedy) for his major scenes at the end of the play.

Bobby Fox as deranged Charles Guiteau was handsome, lithe and dapper bringing the house down with his ‘The Ballad Of Guiteau (I Am Going To The Lordy)’. Fox jumped using the LED fairy light as a skipping rope-cum-noose in his show stopping number. Unfortunately this DID stop the show with major drama on opening night as Fox badly injured his foot at the end of the solo. Ryan Gonzalez will be stepping into the role until Fox’s recovery. We wish Mr Fox (readers might remember him in Jersey Boys) a fast and full recovery.

Leon Czoglgosz, played by Jason Winston, was an anarchist under the spell of radical activist Emma Goldman (tall, imposing and rather severe Madeleine Jones). The Balladeer tells us his eventual fate in ‘The Ballad of Czolgosz’.

Assassins is a taut, often tense and very gripping production. A must see.