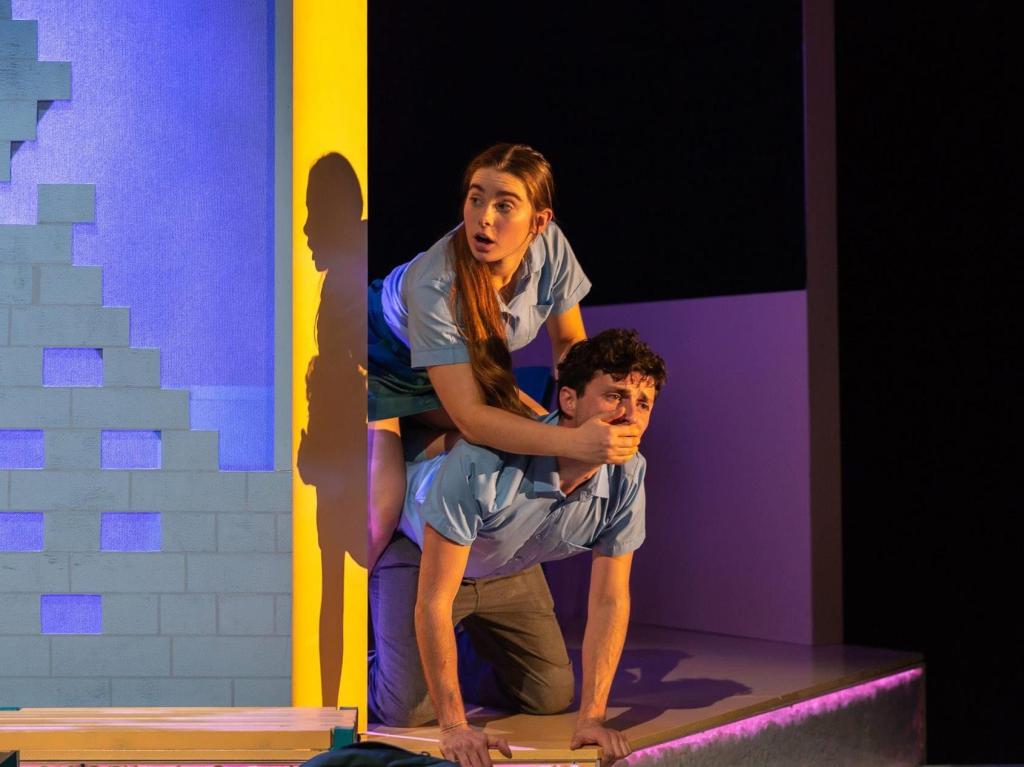 Amphibian’s central focus is Hassan, a refugee, high school student whose story presents a fundamental concept; that of a child’s right to feel safe, to be prepared and anchored by the world of adults around him. It’s weighty stuff.

There are other themes in this 50 minute work, in the playwright’s own words ‘…the two characters play a game of hide and seek with their emotions, personalities and histories’, it’s upbeat and recurringly playful, thanks to the very talented Maiah Stewardson’s performance as Chloe, a 16 year old high school student.

Some of it is didactic and overwritten, a dream sequence seems out of place and ‘fluffy’ given the subject matter, the set defies explanation  – more of that in a moment, but as a new work it sparkles with ideas and topics taken from the mouths, hearts and creative minds of school children currently within our education system. In this lies the play’s strength.

The set is unusual, it speaks of institutional cleanliness, is brightly lit, pastel hued and mysteriously positioned off to one side in the Space theatre. It’s a design choice that creates a black, unlit and unused void across one third of the playing space, rendering integral projection at a jaunty angle even from mid-stage and giving audience members the impression of having to crane continually to catch all of the content. Designed by interdisciplinary artist and self-proclaimed ‘perplexity imposer’ Meg Wilson, it also creates a weird distance between the intensely personal stories of the central protagonists and their audience.

Without giving too much away, the action dances between past and present, using a mix of pre-recorded voiceover, live action and projection. If jumping between amplified and non-amplified voices is sometimes hard on the ears, these auditory anomalies work so well at driving the story into emotive nooks and narrative crannies that the moments of strangeness are forgivable.

Clever use of recorded Farsi, Afghani language, dips Hassan’s story in the credible and endearing; the technique forces the viewer into an understanding of his childish powerlessness. In voiceover, he is dictated to, the inevitability of his journey sealed, there is simply no room for recourse; literally no way to argue – it’s a strong, disempowering conceit, deliberate or otherwise, that serves the work well.

Amphibian is aimed squarely at young adults; dark, but not too dark and at its heart has an altruistic aim, in the words of the playwright …’to share a story and encourage a more compassionate generation of voters’. It’s a commendable run at the topics it introduces and definitely worth a look.