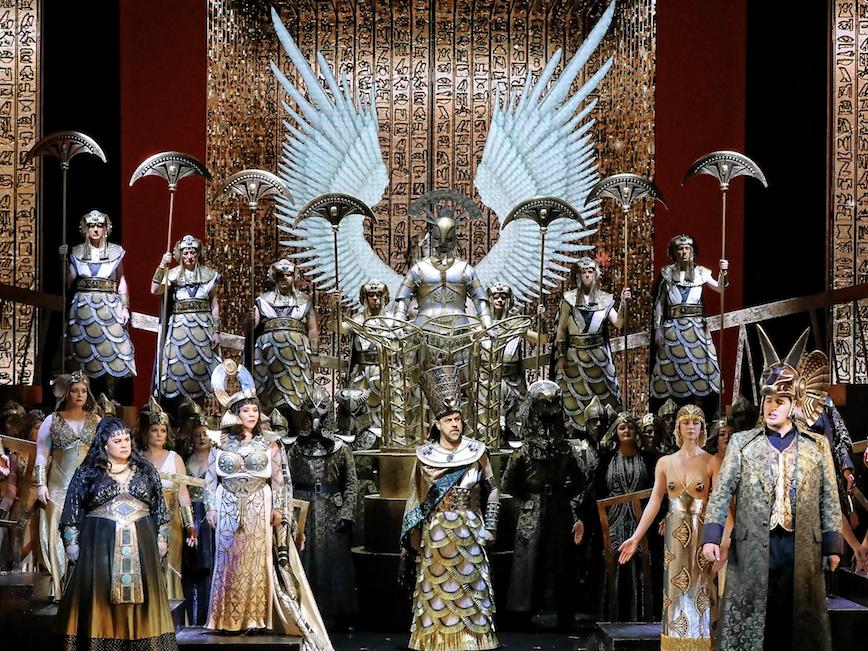 Aida would be the most appropriate debut – the blockbusters of operas with its roll-on cast of horses, elephants, camels, looming temples, pyramids, and crowds of imprisoned Ethiopians. It is often an opera performed in arenas; its last outing in Sydney was on the harbor (2015).

That is all eliminated in this new production, spearheaded by Italian Director Davide Livermore, who turned to the Milan-based designers Giò Forma to create adaptive, flexible LED screens, and another Italian entertainment design company, D-Wok, which was responsible for the video content.

In our Netflix, video clip, digital swipe and scan world, perhaps this is the answer to diversifying audiences for opera – well some operas. What works for Aida will not for others. This technology also has the double whammy of being adapted to any opera, unlike the stand-alone physical sets that take up space and time.

And the investment in this technology is here to stay. OA will present three digital prod­uctions in Sydney next year, and the first will be seen in Melbourne in 2020.

But did the investment pay off? Did it work? How did it feel? It is presented a well-integrated production?

If we are to go by the audible gush from the audience when the LED panels were “possessed” by a writhing golden serpent, then yes. It had the excitement and currency of the latest video clip fused with captivating cinema and live performance.

It would appear that in all this new, the old guard still reigns. I am not sure if I have heard a voice as big as that of American soprano, Amber Wagner (Aida), in the Joan Sutherland Opera Theatre. Together with Elena Gabouri as the Egyptian princess Amneris, a stunning performance by Warwick Fyfe as Aida’s father Amonasro, solid performances also by Riccardo Massi (Radamès) and Roberto Scandiuzzi (Ramfis) – it was clear that this opera was still about vocal delivery – and the audience appreciated it.

Despite her massive voice, Wagner was able to deliver incredible range, the final act her control in an incredibly sensitive delivery. It is almost hard to believe this is her debut role as Aida, and with more time on stage, her physical stiffness might relax. Bring on the arm gestures!

Massi at times was overshadowed by Wagner, but found his strength in the role as the opera proceeded. Likewise, Gabouri gleamed as she settled into the role – a gutsy performer with an empowering stage presence – making the most of her costume (thankfully no wardrobe failures with those plunging necklines).

One of the real gems of the production was home-grown Fyfe, first appearing in the second act and taking this role head-on with great dramatic energy and vocal depth. Bravo!

One of the fears of being so reliant on technology is its capacity to fail when least wanted. While there were a few tiny pixel errors, the outcome was impressive.

10 digitally responsive LED panels stack back at a deep into the stage, corralling our visual engagement in to a vee. It immediately cuts the stage back by a third, which at time was problematic with a large chorus such as Aida’s.

The screens also have an optimum viewing position, which has an impact on the audience experience.

That said, the flexibility of the screen’s movement and capacity to not only inspire location but the working of the inner mind – a black panther would appear at Amneris plotting, and we seeming see into Radames soul when he sings Celeste Aida. The finale with temple hieroglyphs was an apt conclusion after all the visual stimuli.

New also to this production was the introduction of an “intelligent” lighting system called Zactrack. Appratenly the principals carry a radio transceiver which allows their movements to be tracked – and light.

The costumes – well like everything in this production were larger than life, designed by Gianluca Falaschi. From huge headdresses, to plunging cleavages, to the King of Egypt a kind of chariot riding Tinman, to stunning costumes in the second act for the dance corp.

The choreography? Well at times possessed, at others gyrating and athletic – these were big dance numbers on a tight stage. Full credit to the Opera Australian Dancers.

Overall, while I was totally exhausted by the end of this Opera’s presentation, I am keen to watch the journey that Opera Australia takes with this new technology. And when the voices are this good – well Opera will always be opera!