Puppetry Review: Picasso and his Dog

The artist and his dachshund : a long-lasting, inspirational friendship
Isabelle Oderberg 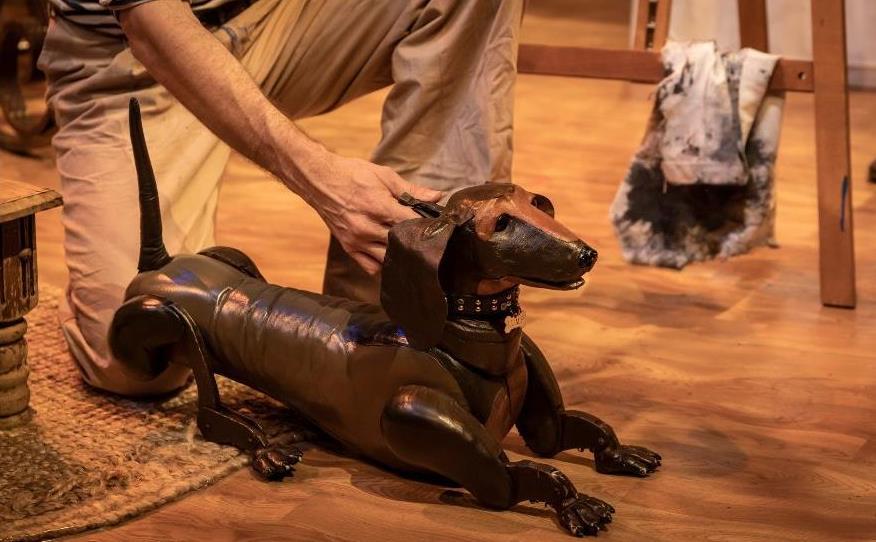 Picasso’s Lump is a good boy and a source of inspiration for the artist. Picture by Darren Gill.

Showing as part of this year’s Melbourne Festival of Puppetry at the reopened La Mama Theatre, Picasso And His Dog is based on the true story of the renowned artist and his relationship with the dachshund Lump, who lived with him for six years.

This special relationship was the subject in several of Picasso’s artworks and even inspired a book, which appears to have been the source for at least some of the stories in the stage production. Lump: The Dog Who Ate a Picasso, was written by Lump’s owner, photojournalist David Douglas Duncan, as well as Picasso’s daughter, Paloma Picasso Thevenet.

The centrepiece of the show is the puppet Lump, which is constructed of what appeared to be leather and wood. He is utterly mesmerising and you almost find yourself forgetting that he isn’t a real dog.

The show, by Melbourne-based independent theatre company Lemony S Puppet Theatre, also features shadow puppetry on several occasions, the most magical of which is when the portrait of Lump that Picasso painted on a dinner plate (a piece that incidentally does exist and is now held by the University of Texas after being donated by Duncan) leaps to life.

The production is also an ode to the joy that Picasso found in other animals, with a large section devoted to the mythology and history of horses, which Picasso studied, painted and drew extensively. A painting that Picasso produced when he was eight featured a horse and was the first of his artworks to be conserved.

The primary human performer on stage is Ben Grant who takes on the role of Picasso with energy and authenticity.

The other two human performers are puppet maker Jacob Williams and puppet doctor Tamara Rewse who alternate seamlessly in roles as puppeteers, but also as Picasso’s assistants.

The final scene of the show emphasises the many studies Picasso made of Lump and the fact that they died in the same year, suggesting their bond was such that they just couldn’t live without each other.

It’s a really beautiful production, with warmth, care, thought and imagination. There’s a strong undercurrent of magical realism that weaves the messages together, taking leaps of fantasy that manage to feel natural.

The show doesn’t feel like a “puppetry production”, rather the subtleness and beauty of this puppetry elevates the telling of a love story so it stays with you long after you leave the theatre.

Picasso And His Dog